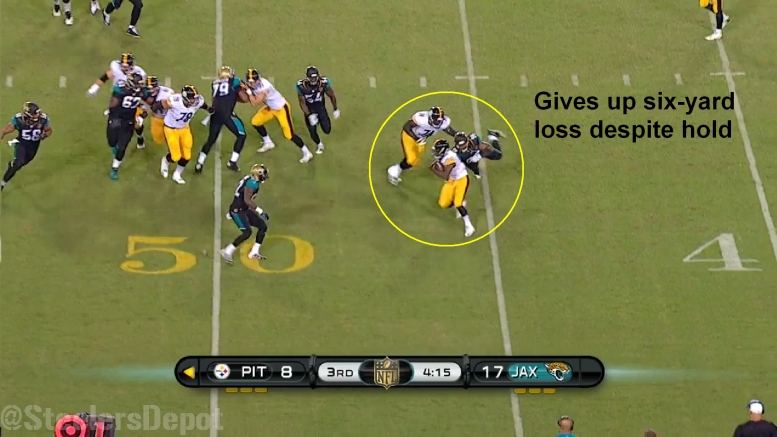 With veteran starting guard Ramon Foster in the final year of his contract and reserve interior lineman Cody Wallace the oldest of the group—he will turn 31 in November—the Pittsburgh Steelers made a concerted effort to gather talent from the undrafted free agent pool along the interior offensive line.

The team already has had Chris Hubbard in the pipeline for two years, spending 2013 on the practice squad and 2014 on the 53-man roster, though he was only active for one game. If his preseason performances this season are any indication, however, then the Steelers had better hope that one of those rookies pan out.

The second-year guard has put together two poor preseason performances in a row, with is play against the Jacksonville Jaguars perhaps being the worse, and most recent, of the two. He must show improvement during the final three games in order to retain his roster spot.

Hubbard entered the game around midway through the second quarter and played about through the third quarter. His first opportunity in run blocking successfully highlighted his greatest physical deficiency, which is a plain and simple lack of functional strength.

On this play, running back Josh Harris was forced to sidestep a skating Hubbard, but still managed to get around him and find the hole for a six-yard gain. The defensive end had little difficulty driving him three to four yards off the line of scrimmage.

You may be interested to know that that defensive end was Ikponmwosa Igbinosun, who was a former undrafted rookie free agent of the Steelers a few years back. He has not made a 53-man roster in his three seasons, and last year played in the Arena Football League.

Two plays later, while facing a 3rd-and-2 situation, the left defensive end took advantage of confusion between Mitchell Van Dyk and B.J. Finney to gain easy penetration. Van Dyk thought that Finney was going to double team the end, and we see the results of that misapprehension. But Igbinosun had already beaten Hubbard as well, and was credited with the primary tackle on the play for no gain to force a punt.

Shortly before halftime, Hubbard was beaten outside by defensive end Ryan Davis, who shot inside of the left tackle with Hubbard stopping his feet and losing position. The pressure helped induce an incompletion during a two-minute drill.

It was two plays later in which Hubbard failed to pick up a stunt that resulted in a sack on third down. He simply stayed with the man in front of him while paying no mind to the lineman rushing in from behind him.

The most baffling part about this play is the fact that the Jaguars ran a stunt with the exact same players on the previous play, which Hubbard picked up fine. In fact, it was an even more complicated pressure package with an added blitzer coming off the edge. 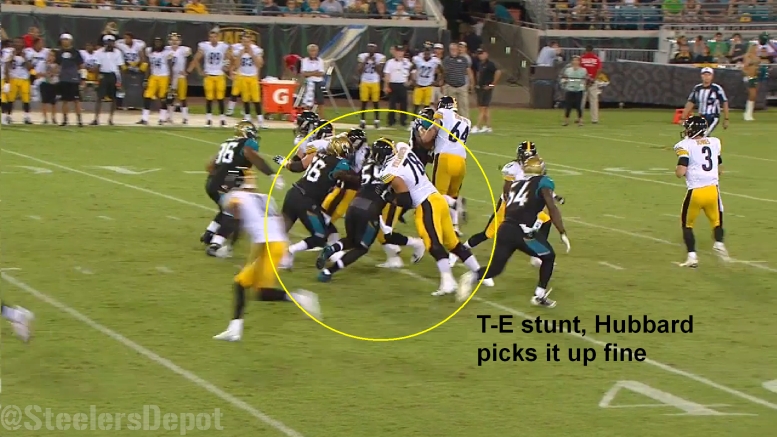 To add insult to further insult, he also, on one occasion, managed to take out his own man on the Steelers’ opening offensive play of the third quarter. While attempting to get upfield to get out in front of a screen pass, the unfortunate lineman managed to knock down running back Jawon Chisholm immediately after he had spun away from a pair of defenders and was set to turn upfield. A pile of three defenders lay at his feet, with another on the ground in his wake, and yet an inadvertent gut bump from his own lineman sabotaged what could have been a fine play.

Perhaps equally impressive, at least as far as his own participation is concerned, was this late third-quarter play, on which Hubbard managed to surrender a six-yard loss on a running play while he was illegally holding the defender making the tackle. You know your performance was bad on a play when the defense declines a holding penalty on first down.

At last, we have Hubbard again in pass protection, allowing significant penetration to help induce an incompletion. On third down and three, the guard succumbed to the bull rush of Davis, penetration six yards and nearly deflecting the pass.

Hubbard never managed to set his base on the play. It was fortunate that the linebacker in coverage was flagged for holding. It was equally fortunate that Davis did not manage to tip the pass, which would have negated the holding penalty. Instead of a punt, the drive ended in a field goal. It was the only points scored while Hubbard was in the game.