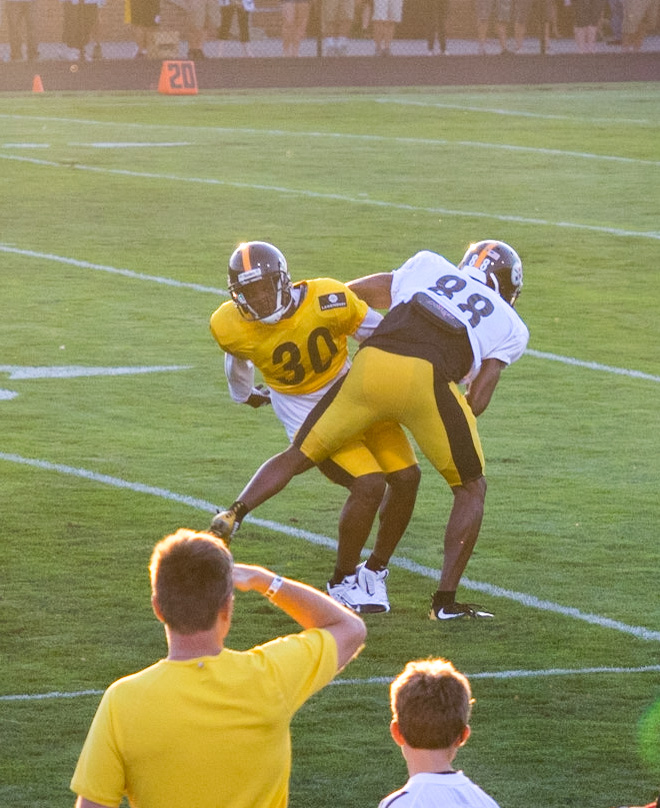 There we were, on the penultimate day of Pittsburgh Steelers training camp, just two passionate writers trying to capture as many intricate details of practice as we could, when all of a sudden the rain came. Again. And thus, after 15 practices of picture-perfect weather and sunshine, Alex Kozora and I were relegated to sharing the smallest umbrella in world history to shield ourselves from the torrent descending from the heavens. Did we get some weird looks? Maybe, but that is the sacrifice we must endure to bring you all of these wonderful nuggets on your favorite players. Courageous of us, I know.

Really nice day for Fogg, who continues to have a strong camp. He broke up a couple passes today and skied for a nice interception of Landry Jones in 11v11. Fogg’s one deflection was against Sammie Coates in the end zone, as the young corner got his head around and leapt to knock the pass away at the last second. Fogg and B.W. Webb are locked in an excellent battle for the #6 CB spot that I don’t think the former will win, but he is definitely good enough to play in this league. Some top notch ball skills and good instincts will be his calling cards.

With Ryan Shazier held out of team sessions and Vince Williams and Lawrence Timmons out once again, the door was open for Spence to shine and he seized the opportunity. The linebacker made a great play to snatch the ball away from Roosevelt Nix in the flat for an interception near the goal line, showing off his athleticism and read-and-react skills to break on the pass cleanly. Spence made some fine stops to blow plays up near the line of scrimmage, burying Jawon Chisholm on one snap and scraping over to set the edge on another run when the outside linebacker got sucked inside (Shayon Green I think).

It was a good day for Fogg’s competitor too, who continues to boast a nice all-around game. We know about what Webb brings to the special teams unit, but he’s shown some nice click-and-close in coverage, playing the pocket well to contest one Jesse James’ catch during 11v11. He jumped routes twice to almost pick off Landry Jones, and swarmed the line of scrimmage on one play to beat Chris Hubbard’s block and make a would-be stop for no gain.

It has been a rough preseason for Hubbard, who isn’t instilling much confidence as a backup guard in his two preseason performances. He’s too slow to the second level, as evidenced by his whiff on Webb and a multitude of other opportunities, and he’s consistently too high at the point of attack. Hubbard gets leverage by defenders too often and can’t sustain blocks as a result. Even newcomer L.J. Fort shed Hubbard to make a stop on DeAngelo Williams for no gain. At some point you ask what Hubbard does well, and you realize the list is extremely short.

One more time for Dismukes on here, who looked like a boy amongst men against the first team defense during one team session. Stephon Tuitt swallowed him up and literally moved him until he was directly in the running back’s path, forcing the ball carrier to re-route and get instantly swarmed for a loss by other defenders. The rough camp continues for Dismukes.

Everyone worked over Palmer today, who has been getting reps ahead of Mitchell Van Dyk, but is struggling to make the most of them. Jarvis Jones turned him inside out a couple times during one team session, as Palmer really only seems comfortable chasing edge rushers off the corner. Any counter moves inside or power rushes typically result in major issues for Palmer.

-Tons of team sessions today, as practice started about an hour late due to weather. I think Alex said there were seven in total, and very little positional work. Made for a fast-paced an enjoyable practice, during which the players seemed to be in great spirits after a contentious practice yesterday.

-My biggest issue with Sammie Coates heading into the draft wasn’t just his hands, but more so his inability to track the ball consistently over his head or shoulder. Those struggles have really manifested itself during the preseason and during camp, as Coates has often lost sight of the ball or slowed up considerably at the top of his route to try and find the football. It is a rare, but startling issue, that needs to improve as he gains experience. He had several steps on Doran Grant today and failed to find the football, slowing up to almost a complete stop and letting a well-thrown ball thud a few yards in front of him. Really frustrating issue to watch manifest in front of you.

–Bud Dupree was calm today, for anyone wondering. Dropped into coverage a bunch in the team sessions I saw, but did see him beat a totally off-balance and out-of-snyc Kevin Whimpey inside on one play when the offensive tackle opened the gate way too easily on first contact.

-Fort made some nice plays today actually. He also got eaten alive on a couple snaps by blocks, so about what you’d expect. Looking forward to watching him in the game.

-Interesting that Darby broke down the defensive backs after their early warmups as a position group, as the young safety is quickly becoming a leader amongst his peers. He’s been vocal about the mission he is on to secure a roster spot and never get cut again like he did last year, and so far it is tough to count him out. Clearly has the respect of his teammates, and that is something the Steelers really value with their defensive bench guys, Robert Golden, Terence Garvin, William Gay (backup in the past anyway), Vince Williams, Will Allen, all prime examples of that fact.

–Collin Rahrig, Kevin Whimpey, Miles Dieffenbach, Reese Dismukes, and Kelvin Palmer taking on the starting Steelers defensive line for four plays during one team session was an abject disaster, as you’d expect. McLendon bullied someone on every snap it seemed. Line was just taken apart at the seams on each snap. Don’t know if anything productive came from those particular reps.