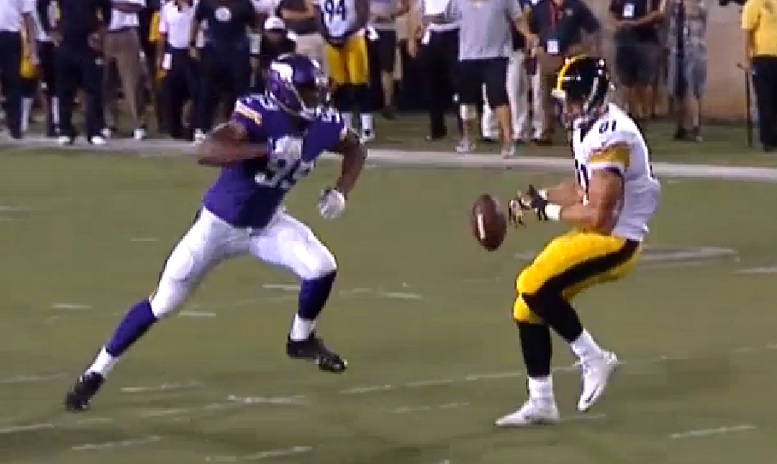 Pittsburgh Steelers rookie tight end Jesse James certainly didn’t have a great preseason debut Sunday night against the Minnesota Vikings, but according to Gerry Dulac of the Pittsburgh Post-Gazette, the young Penn State product had quite a bit on his mind leading up to that contest.

Dulac reported on Thursday that James was struggling with the recent loss of a high school best friend prior to the game and that might have resulted in him not being at his best.

“It’s tough to hear and get over when you’re that close with somebody,” James said Wednesday, according to Dulac.

After the game Sunday night against the Vikings, Steelers head coach Mike Tomlin was asked about James’ rough first performance and what he’d say to him afterwards.

“Knuckle up,” Tomlin said. “This is Sunday ball. This is not Saturday ball. That’s what I say to him.”

It’s important to remember that James just recently turned 21 years of age and that he decided to forgo his final year of college eligibility to enter the draft. The Steelers aren’t counting on him contributing on offense much at all during his rookie season so he has plenty of time to adjust and continue growing up as a result.

James wasn’t spotted at the Steelers Wednesday night practice so it makes sense that he was granted a short leave to possibly pay his respects to his recently passed friend. The tight end should get a chance to redeem himself Friday night in the team’s second preseason game against the Jacksonville Jaguars and hopefully he’ll do just that.