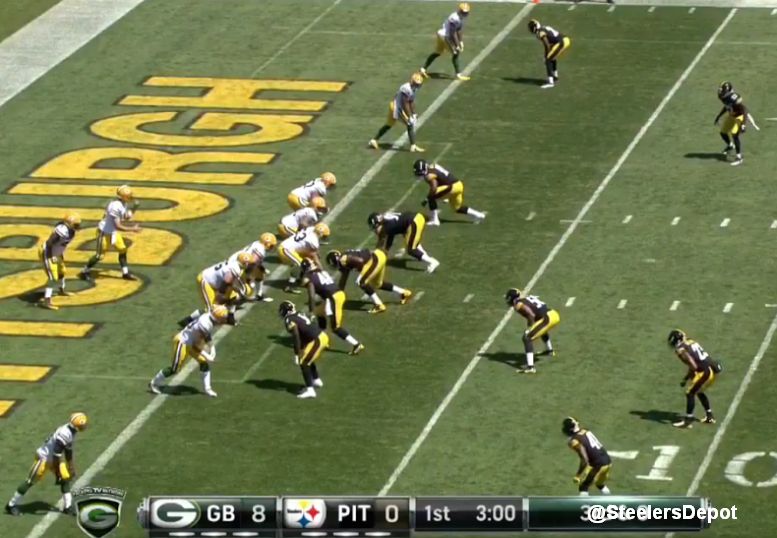 One of the biggest weaknesses of the Pittsburgh Steelers defense last year, until late in the season, was their inability to pressure the quarterback consistently. A little bit of that showed up against the Jacksonville Jaguars, but against the Green Bay Packers, Pittsburgh’s defense was buzzing, notching six sacks and constantly wreaking havoc on the pocket.

I’ve gone back and reviewed several of the team’s sacks, taking a look at the scheme and individual effort that caused the pressure to occur. Today I’ll highlight the Steelers safety off quarterback Aaron Rodgers, and the design and individual prowess behind the play’s success.

The first sack of the game, a meet-at-the-quarterback barrage led by James Harrison, has within itself several different things to show you. Let’s work left to right across the defensive line, looking first at Sean Spence, lined up across from the slot, and Bud Dupree.

Nothing ground-breaking here, just an interesting way the Steelers disguise pressure by utilizing the versatility of their linebackers. Looks like Dupree is gonna rush here and Spence is playing the slot. Even if Spence comes, Eddie Lacy is in to protect as well for the Packers. Max pressure Pittsburgh appears to be bringing is five, so with six blockers, Green Bay is well-prepared for any scenario. 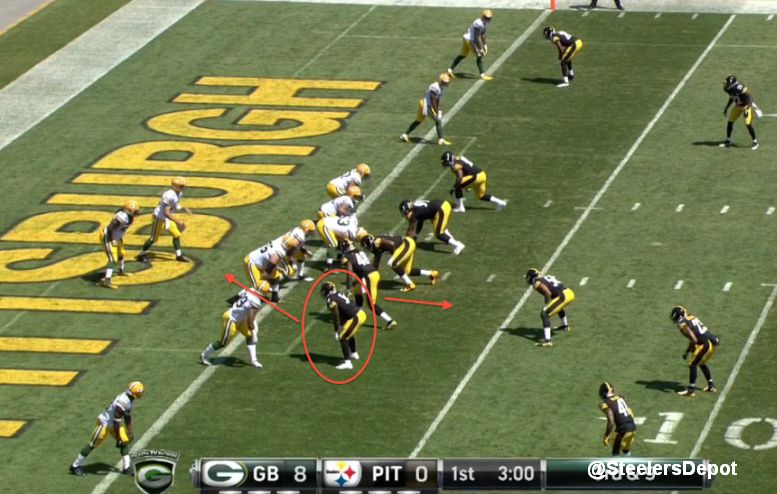 The Steelers counter with a bit of deception, as Dupree shows blitz off the snap, causing Green Bay’s offensive line to pinch down to stop the expected pressure. Instead Dupree retreats into a shallow zone drop, while Spence comes hard off the edge on a blitz and Shazier picks up the slot receiver in coverage. 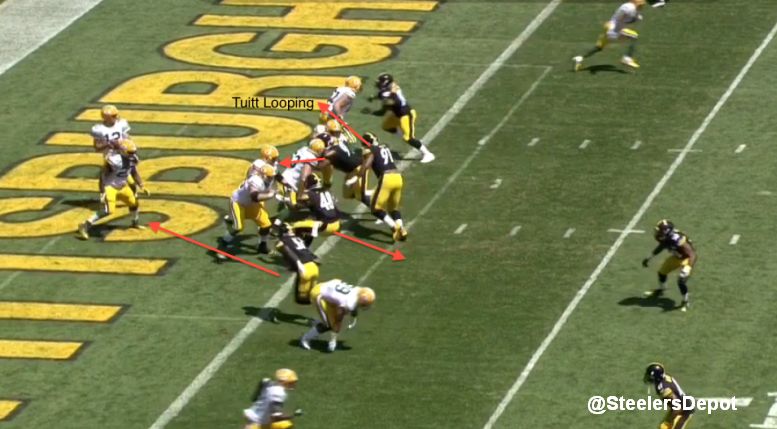 A lot going on here. You can see Dupree is starting to release from his blitz and drop back down the field a few steps, while Spence is taking advantage of the outside linebacker’s heady fake to crash through the open right side of the Packers line. Cam Heyward and Stephon Tuitt bring a stunt from the right side, as Heyward expertly crashes inside to engage two blockers and allow Tuitt a clean loop outside the guard. 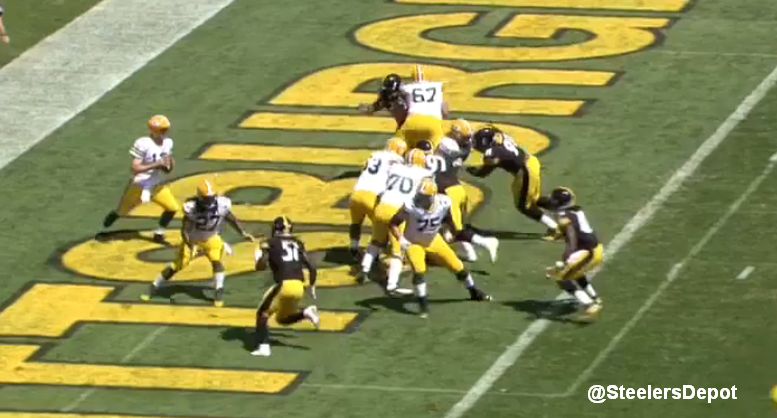 Here you can see things starting to happen. Packers left guard Josh Sitton is just a bit late picking up Tuitt on his loop, and the defensive end takes advantage of the offensive lineman being off balance with great hand usage and power to eventually toss him to the ground. On the right side of the Packers line, tackle Bryan Bulaga recognizes the disguised pressure too late, and realizes he’s vastly out of position to stop Spence’s rush. Lacy alertly moves to pick up the Steelers inside linebacker, and from this point individual skill takes over for Pittsburgh.

Spence shows off his increased physicality with a fantastic bull rush of Eddie Lacy, flashing a great punch to knock the running back off balance. Heyward continues to attract two blockers, while Tuitt is about to shed Sitton. Harrison simply rips under Don Barclay’s punch as he so often does, flying inside for the initial hit on Rodgers. Dupree shows great awareness to rush into the scrum as soon as Bulaga vacates his space to help Lacy with Spence.

The result is a big sack by Harrison, with Spence, Tuitt, and Dupree all coming in to help clean up. Green Bay failed to recognize Spence’s disguised pressure initially, but still had enough blockers to compensate for the mistake. So it is a great design by Pittsburgh on what was essentially still just a four man blitz, but even better execution and individual skill level to defeat blocks and pick up the safety.