In only three preseason games, Keith Butler has put a distinctive stamp on this Pittsburgh Steelers defense. A much more noticeable degree than anyone, myself included, anticipated.

Some of the concepts might seem new to Steelers’ fans, but they’re not new to the league. Nothing is anymore. They’re taught, borrowed, tweaked from the coaches they learned under.

We’ll highlight two areas today. The Steelers use of Cover 2 principles and its 4-3 fronts. When it comes to some of the changes incorporated by Butler and Mike Tomlin, we can directly point to two men: Tony Dungy and Foge Fazio.

Of course, we could go back farther. Nothing was invented by Dungy or Fazio. Dungy learned his 4-3, Cover 2 defense from Bud Carson and Chuck Noll during the Steelers’ dynasty in the 1970s. Carson is often referred to as the creator of the Cover 2, though you can go back even farther. Blanton Collier, head coach Cleveland Browns in the late 60s showed glimpses of it. Houston’s Bill Yeoman, best known for creating the veer, incorporated it a few years prior.

The origins of Carson’s defense is described in Tim Layden’s Blood, Sweat, and Chalk, one of my go-to books on football history.

“Capitalizing on the power of 6’3, 205-pound Blount, Carson pushed the corners up to the line of scrimmage and instructed them to jam wide receivers. The safeties – Mike Wagner and Glen Edwards – were assigned to cover deep zones behind the jamming corners. Outside linebackers Ham and Andy Russell would cover vast space from the hash mark to sideline, and middle linebacker Henry Davis, a journeyman keeping the seat warm for the Hall of Famer to come, would be required to drop deep in the middle zone, sometimes 25, even 35 yards deep.

“’Bud came in one day, I think it was early in the season,’” as Wagner recalls, “’and just drew it on the chalkboard. It was different, but I think everybody in the room could see the potential right away.’”

Dungy played with Carson for a season, making a huge impression on the young safety. In Layden’s book, Dungy would heavily credit Carson.

“’Everything we do now,’” Dungy said in the fall of 2006, with his Colts en route to winning the Super Bowl,”’ you can find in my Pittsburgh Steelers playbook. I did keep it all those years.’”

Dungy took what he learned to the Tampa Bay Buccaneers, hiring and working with then little-known defensive backs coach Mike Tomlin.

I was able to pull the Minnesota Vikings’ defensive playbooks from 1995 and 1996, showing the Cover 2 concept. It doesn’t look any different from any other concept, generally speaking it’s known as a safe yet vanilla defense, but this is the concept the Steelers are running more than they have since those Carson years. 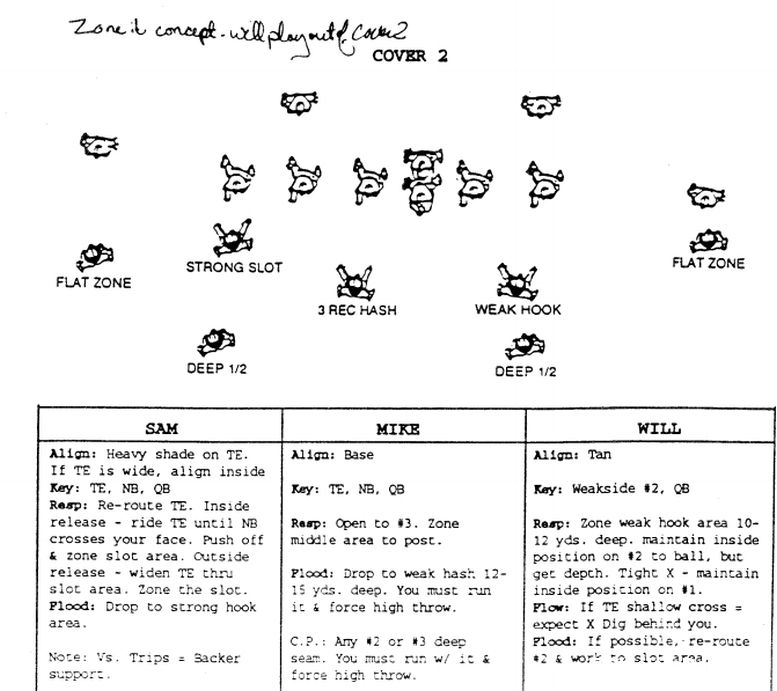 4-3 defenses have existed longer than most of us have been alive. There is no unanimous inventor; Tom Landry’s 4-3 Flex is well known but Landry was inspired during his time as a player with the New York Giants. His head coach Steve Owen ran an “umbrella” 6-1-4 defense, pulling the two ends to effectively create a 4-3. This is how the 3-4 was first created too, college defenses running the 5-2 pulling their ends and dropping them.

Most of these ties would sensibly intertwine with Mike Tomlin. The coaching tree essentially boiling down to: Noll to Dungy to Tomlin.

It might be easy, perhaps a little lazy, to think this change is all induced by Tomlin. The head coach leading this dance, stepping on his newly promoted defensive coordinator’s toes. But Butler has Tony Dungy ties, too. You just have to look a little harder.

Butler is mostly perceived as a 3-4 lifer. He played the latter half of his career with the Seattle Seahawks, running a 3-4 under head coach Chuck Knox. His college stints offered some 4-3 looks but he only spent one year in charge there, serving as the defensive coordinator for Arkansas State in 1998. Pittsburgh, obviously, was a thoroughbred 3-4 defense.

There’s a time sandwiched in-between, four years as the linebackers coach for the Cleveland Browns. It was in those last two years, 2001 and 2002, where he worked for defensive coordinator Foge Fazio. It was Fazio’s final coaching stop, retiring before the 2003 season.

Fagio, known locally for coaching the Pittsburgh Panthers in the mid-80s, took over as the Minnesota Vikings defensive coordinator in  1996 when Dungy was hired to be the head coach of the Buccaneers.

The ’95 and ’96 playbooks, the ones I found available online, don’t differ much conceptually, Fazio carrying over a lot of what Dungy installed.

I’m not enough of a football historian to possibly credit the inventor but Chuck Noll was at least one of the first to utilize a cocked nose tackle, turning Joe Greene on an angle to make it easier for him to shoot between the center and guard, as shown below. 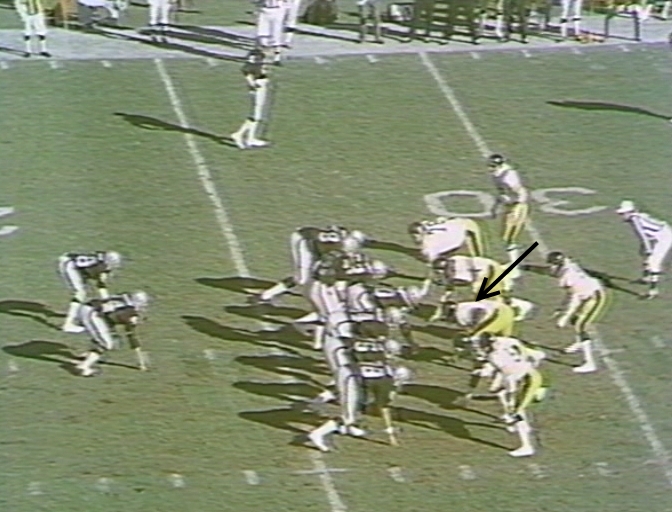 It wasn’t Noll who came up with the concept though. Credit goes to defensive line coach George Perles who convinced Noll and Carson to implement it before the 1974 AFC Championship against the Oakland Raiders.

“…the team’s run defense would be even more stifling if the defensive tackle to the tight end side was offset from the outside shoulder of the guard to a cocked position angling directly into the center.”

In each playbook, you can see specific over and under fronts, shifting to and away from the closed side of the formation, with a cocked nose tackle. 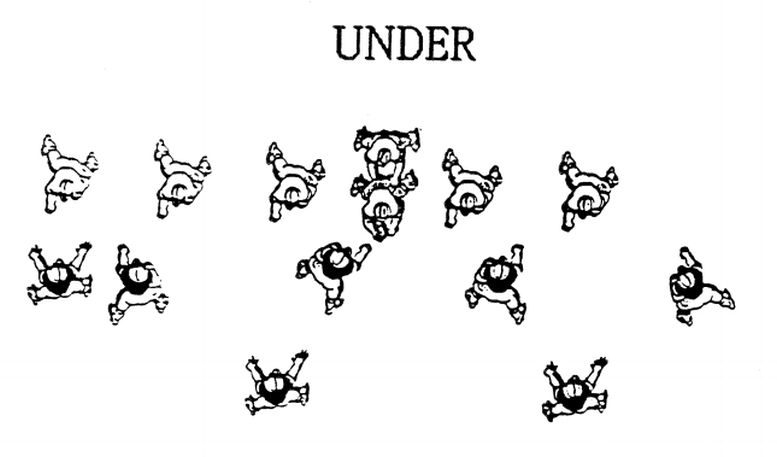 It’ll be easier to show with the end zone angle during the regular season but this is what the Steelers have employed against certain sets during the preseason. They’ve typically an over shift against two tight end sets but ran it a little bit when the Green Bay Packers went 11 personnel last week.

Again, this is very general scheme stuff but you can definitely see the influence. A breakdown of each alignment in an “over” front.

The important thing to remember here is that in this shift, the “nose tackle,” Steve McLendon, Daniel McCullers, whoever, is shifted as the three tech. The defensive end becomes the actual one technique or nose tackle. It’s the 3-4’s spin on a 4-3 front.

Here are examples in still shots from the first three weeks. 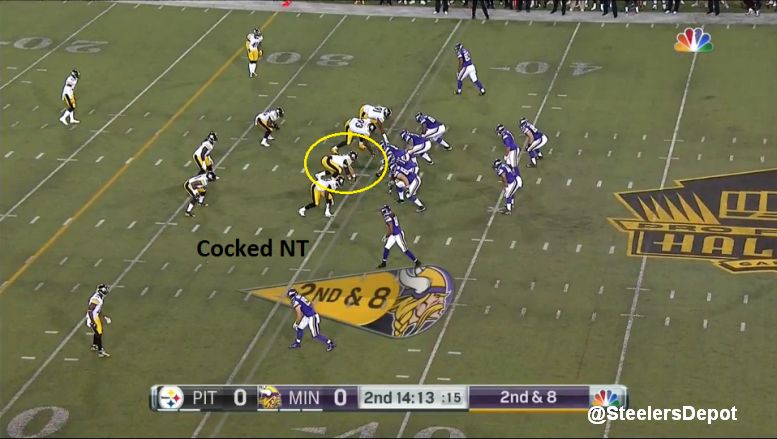 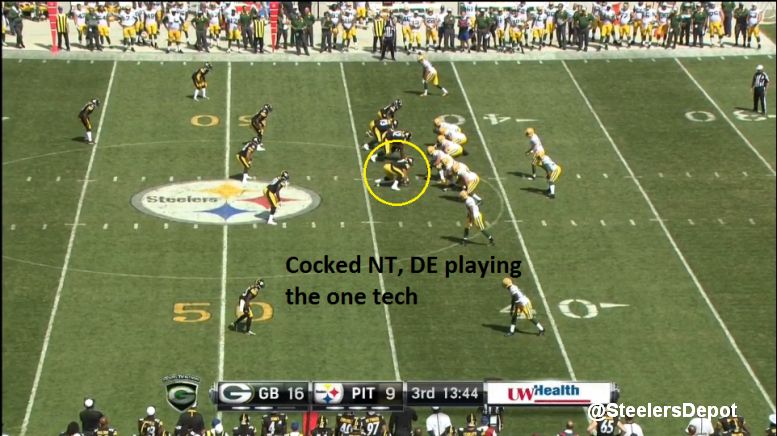 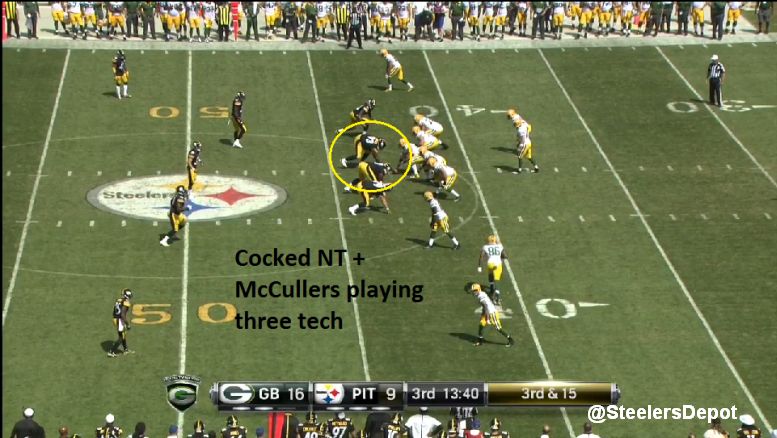 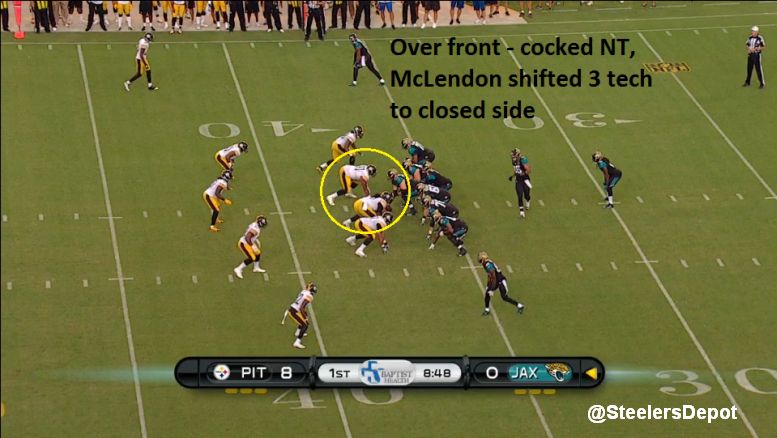 I don’t know how often we’re going to see this in the regular season. It certainly won’t be a base for this defense. Hopefully the All-22 will glean a little more insight into the coverages with this front and any additional carryovers from the Dungy/Fazio era.

Football history is a family recipe. It gets passed down from generation to generation, each coach getting to take their favorite and apply it to their team. That’s what Keith Butler and Mike Tomlin will do in 2015.