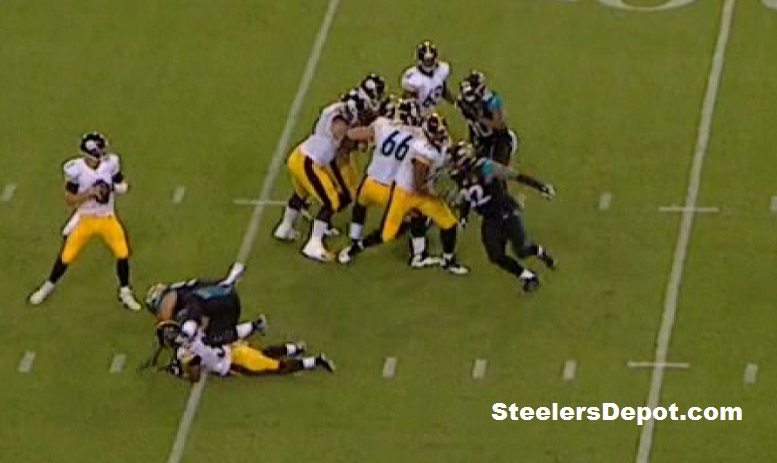 Once the Pittsburgh Steelers starting offense left the field Friday night in the preseason game against the Jacksonville Jaguars, there were very few bright spots to hone in on the rest of the game. However, pass protection by the Steelers running backs certainly caught my eye as being a positive and below are a few examples of that.

Late in the first quarter, running back DeAngelo Williams showed that he’s a reliable pass protector in the passing game just as he was for several years with the Carolina Panthers. On this play that featured 12 personnel, the offensive line slid protection away from the tight ends and that left Williams to account for the free edge rusher.

Williams quickly squares up and effectively cuts the legs out from underneath the defensive end and that allows Landry Jones to easily connect with Darrius Heyward-Bey on the crossing route.

A quick nod to Will Johnson on this play for circling back and blocking the linebacker as that frees the corner up for Heyward-Bey, who easily moves the chains as a result.

In the second quarter, it is Williams once again who makes a tremendous block on the blitzing strong side linebacker. Jones is afforded a wide open passing lane as a result.

On this play, you’ll see Dri Archer read the linebackers inside out correctly and while you’d probably like to see him to eat up some grass a little quicker, he does manage to effectively cut down the blitzing outside linebacker. Jones probably should have read this better and hit Martavis Bryant quickly on the hot route.

In the fourth quarter, the Steelers offensive line has protection sliding to the right and Jawon Chisholm effectively helps out tight end Ray Hamilton by cutting the defensive end down on the edge.