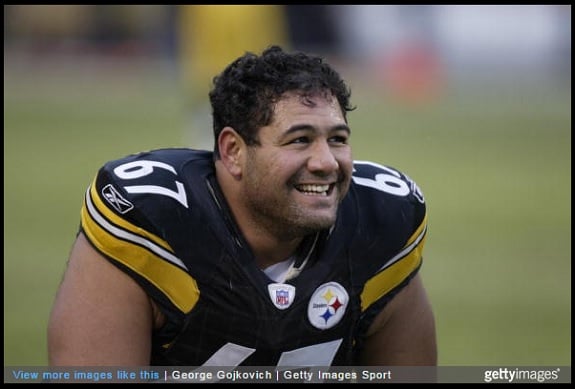 Perhaps one of the most underrated players to don the black and gold jersey in recent memory, defensive end Kimo von Oelhoffen had a reputation similar to that of fellow end, Aaron Smith, in that he was a no-nonsense, lunch pail type of player that symbolizes the Pittsburgh brand of football. He’s often remembered for the devastating hit he inadvertently put on the knee of Bengals’ quarterback Carson Palmer, but to most fans, his play didn’t go unnoticed, as he helped anchor one of the stingiest run defenses in the league along with Smith and Casey Hampton.

His time spent with Pittsburgh has prepared him for his current life after football, and many of his avenues have been opened by the experiences he had there.

“Playing under great coaches and for a great organization helped me learn the core values and characteristics of the team and the individual,” von Oelhoffen said, according to the Pittsburgh Sports Daily Bulletin.

He cites a passion of his is giving back to those who helped mentor or mold him, something he gives tremendous credit to his grandparents for. , and ultimately his construction and development company  came up with a senior living community known as Arcadian Cove.

“This community has recently maintained my complete focus due to the opportunity I have here to provide excellent quality of life for the Residents and the prospect of a great career to my employees,” he said.

He hasn’t completely shut the game he loves out though, as he’s coached both at the high school level and, recently, was signed by Western Oregon University in 2014, where he coached the defensive line last fall. He brings with him 15 years of pro experience, as well as playing for some of the best coaches in the business, namely Dick LeBeau and Bill Cowher.

While watching from afar, von Oelhoffen became well aware of the caliber of defense Western Oregon fielded. It reminded him of his days in Pittsburgh, whether it be the star first-round pick or undrafted free agent, in that hard work and determination can overcome many obstacles on the gridiron.

“During my time with Steelers I learned that some players, while they may not be the most talented or have great physical attributes, they will find a way to win,” he said.  “I really want to put what I’ve learned to use and apply that knowledge, and just give back as much as I can.”

WOU head coach Arne Ferguson was ecstatic about the hire at the time, raving about Kimo’s resume and experience.

“His amount of knowledge and tremendous technique will only help our guys get better, Ferguson said, according to WOUWolves.com. “I really think he is going to help our whole program develop.”

Initially drafted by the Bengals, von Oelhoffen won a Super Bowl ring with Pittsburgh in 2005 before stints with the New York Jets and Philadelphia Eagles. However, it was his time in the Steel City that left an indelible imprint.

“With the Steelers, there weren’t any questions on what was expected of you as a player; they were clear, they were precise & they were consistent,” he said, according to PSDB. “It allowed me as a player, to truly evaluate myself; my strengths, my weaknesses, and my production.  There were no excuses, just a plan and a process to improve every day to meet those standards.”