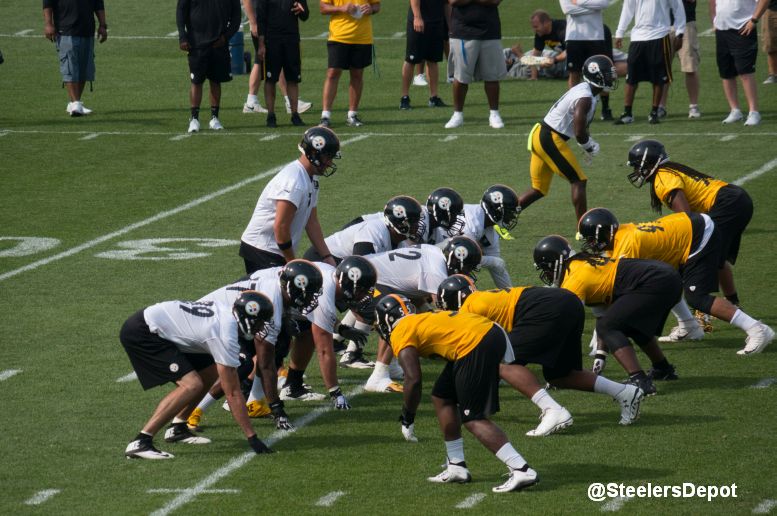 With the first two days resembling more like OTAs than training camp, the Pittsburgh Steelers are in pads for the first time today. Should make for an exciting day. Here’s a couple things I’m watching for.

– The obvious ones. We know the team is in pads but will there be full tackling? Or will Mike Tomlin still decide to scale back and go through one or two “thud” practices before turning everyone loose. Even the players don’t seem to know exactly what is going to happen today.

– Will there be any one-on-one drills? None have occurred yet. Offensive line vs defensive line, wide receiver vs cornerback. Those are great opportunities to evaluate players, especially OL/DL, that we haven’t gotten yet.

– I have to assume Tyler Murphy is going to stay at QB today with Devin Gardner still working with the receivers. It’d be foolish to switch them in their first padded practice and both players deserve the chance to build on what they’ve done the first two days.

– Finally get to have a decent evaluation for the running backs. Almost like day one for them. DeAngelo Williams and Josh Harris are two guys I’m especially excited to watch. Also, can Dri Archer make players miss in the open field?

– Talked about it several times but dying to see what Eli Rogers can do once defenders are able to strike back. Big day for him.

– Can Sammie Coates step up and make some plays? Really want to challenge him. Team has shown some tough love to the rookie and he has a prime opportunity to recharge with yesterday’s off day and attack today’s practice.

– If Matt Spaeth is out again, it’ll be a big day for guys like Jesse James and Rob Blanchflower. Would love to see a big play downfield – any catches the tight ends have received have been underneath. Michael Egnew has a chance to show any semblance of blocking ability, too, though I really question if he has the strength to do it.

– Like I said, if the offensive line gets to go through some one-on-one’s, we’ll really start getting a good look at these guys. If not, it’ll be another difficult evaluation. Still probably a little too early to see anyone moving around. As one player told me, they’re waiting until they get comfortable with their current spot.

– Ditto for the defensive line. Great opportunity for players like L.T. Walton and Clifton Geathers to show what they can do in a one-on-one setting. Know it’s going to happen at some point. Question is just going to be when.

– Hopefully James Harrison will be back, I don’t think the team can hold him off the field any longer, and while there isn’t much else to learn, it’ll be nice to see him in pads. Shayon Green will be the loser in all this unfortunately, becoming the 4th team ROLB.

– Going to continue to watch Bud Dupree’s progression. Like Jon Ledyard has pointed out, it’ll be important for him to develop some counter moves and a strong initial punch.

– Opportunities to hit are going to endear themselves to Shamarko Thomas and Mike Mitchell. Both have been quiet, limited by the non-contact practices, so I’d love to see one of those two end day three with a literal bang.

– It seems likely Ross Ventrone won’t participate. Who will take his spot? Will it be Alden Darby, who briefly replaced him on Monday. Whoever it is will get to run with the second-team and see a sizeable increase in snap count, crucial in separating themselves away from the rest of the group.