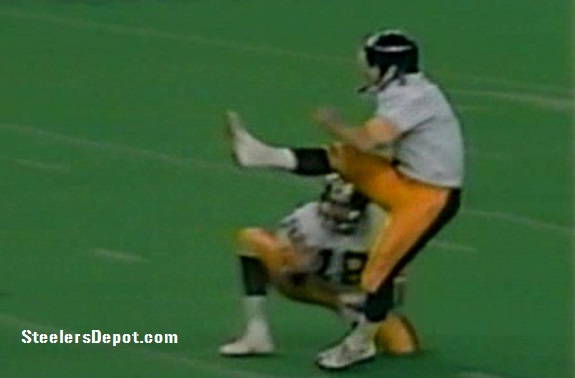 Former Pittsburgh Steelers kicker Gary Anderson is celebrating his 56th birthday today and with that, I thought it would be fun to feature him in this week’s Throwback Thursday post.

Today, we will travel back in time to December 31, 1989 and the Steelers Wild Card game against the Houston Oilers. That was quite a game and it looked like the Steelers were doomed down seven points with 6:02 remaining in the fourth quarter. However, Steelers quarterback Bubby Brister led the offense on an 82-yard game-tying touchdown drive that was capped off by a 2-yard touchdown run by running back Merril Hoge with 46 seconds left to send it into overtime.

In overtime, Steelers cornerback Rod Woodson, who was in the hospital with the flu and a concussion a few days prior to the game, hit Oilers running back Lorenzo White along the left sideline and forced a fumble that he ultimately recovered at around the Oilers 46-yard-line. Perhaps you remember that play, but if you don’t, here it is below.

After the Steelers offense only managed to drive the ball 13 yards down the field on four plays, head coach Chuck Noll ultimately decided to send Anderson out for a 50-yard field goal attempt to win the game after defensive coordinator Rod Rust told him he wasn’t sure if his unit could stop the Oilers offense if they punted the football back to them.

At the time, Anderson was 6-of-15 for his career on attempts of 50 yards or more and he hadn’t attempted a kick from that distance at all during the 1989 season. After an icing attempt by Oilers head coach Jerry Glanville, Anderson proceeded to drive the football between the uprights with a little room to spare and the Steelers won the game 26-23.

Here are the reactions of both Glanville and Noll after Anderson’s kick.

If you would like to read more about that epic game, Bob Labriola has a great recap of it here on steelers.com. I was 21 years-old at the time and remember that game like it was yesterday.