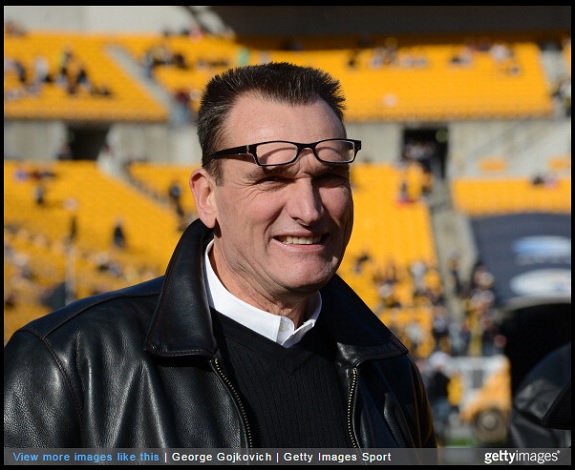 We’re moving into the trenches today in the case for the best offensive tackle the franchise has ever seen. Jon selects Jon Kolb while I take Tunch Ilkin.

Unlike the plethora of prominent Steeler names at the majority of positions throughout Pittsburgh’s rich history, offensive tackle doesn’t conjure up images of many standout players. The Steelers have had many solid options bookending their offensive line over the years, but very few that have become household names.

That’s what makes Jon Kolb’s selection as the best offensive tackle in team history so easy, he’s really the only deserving candidate of such an esteemed title. The anchor of the 1970 dynasty team’s offensive front along with Mike Webster, Kolb was a man ahead of his time at the position. While he wasn’t particularly large at 6’2, 262 pounds, Kolb was one of the most powerful offensive lineman in the NFL at his time, bench pressing over 550 pounds. Imagine what he would have done with today’s resources and supplements!

That trademark power was put on full display as a pass protector and as a run defender, opening holes for Franco Harris and carefully protecting Terry Bradshaw’s blindside. Kolb had a vise-like grip and played with an edgy nastiness that belied a Steelers offensive lineman. It was largely the violence of his playing style that helped form the Steelers run game into such a formidable force in the ‘70s.

A participant in multiple Strongman competitions in which Kolb did quite well, few were as committed off the field as he. There have been rumors about steroid usage, but to this day they remain unproven, while Kolb’s legacy continues to grow. The former Steelers offensive tackle has dedicated his life after football and competitions to his faith, regularly speaking at conferences and churches about his time in the NFL and the wisdom he’s acquired in life. I had the privilege of attending one of these events once, and it was no surprise to find Kolb just as classy and well-spoken as had been rumored.

But on the football field Kolb was driven by the desire to win and succeed, capturing four Super Bowl titles during his 13 years in the NFL, all of which were spent in Pittsburgh. Kolb was an ironman as well, not missing a game for the first ten years of his career, including 112 straight starts from 1971-1978

That was who Kolb was though, a man amongst boys, whose toughness and physicality shone through on every snap. He’s never received quite the recognition he was due, but amongst a team with so many reputable players, it is easy to lose Kolb in the shuffle. Don’t make that same mistake with your vote for the greatest offensive tackle in Steelers history, regardless of what Alex’s argument might attempt to make you believe.

Despite the Steelers storied history, there isn’t an obvious or compelling choice for its greatest tackle. And certainly not the second greatest, because in a moment of honesty, would’ve chosen Kolb if given the chance. But Jon had dibs and life isn’t always fair.

Spurned by Kolb, Tunch Ilkin has the most gripping case. His career, 1980 to 1992, is unfortunately stuck between two eras. Entered after the 70s dynasty, left before the franchise’s next Super Bowl appearance in 1994. But Ilkin was a lynchpin during that football purgatory. 143 career starts, the most in Steleles’ history and five more than Kolb, and two Pro Bowl selections while Kolb – this does surprise me – was never elected.

He was not the ironman Kolb was but just as effective, his best years coming on sub-par teams with even worse quarterback play. Kolb blocked for Bradshaw, Ilkin did it for Bubby Brister and even, gasp, Todd Blackledge.

Of course, I have to admit part of this selection comes from how relevant Ilkin is to the Steelers’ community today. He’s been Bill Hilgrove’s right hand man on the radio since Myron Cope retired before the 2005 season and I say in all sincerity, provides some quality analysis that’s fleeting today.

I’m sitting here trying to think of more to write. But for an offensive lineman, it’s appropriate to be brief. True to the position, we talk about their greatness for only a moment and move on.