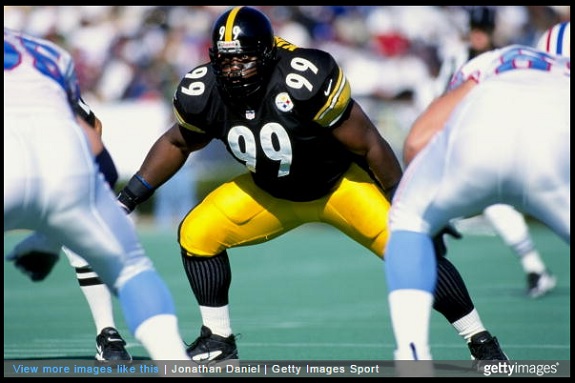 When one thinks of the Steelers, both past and present, one tends to think of their linebackers the same way one views a peanut butter sandwich without jelly: the two just go hand-in-hand. One of their greats from the 90s Steelers teams was Levon Kirkland, the 6-foot-1, 275-pound brick house inside linebacker whose listed weight was probably hidden by the media guide much the same way it was for another recent fan favorite, Casey Hampton.

He went on to play for several other teams in his career, including the cross-state Philadelphia Eagles, but to Kirkland, there was no other feeling than lacing up the cleats for Pittsburgh.

“There was a certain pride there,” he said, according to Teresa Varley. “The organization was more like a family than a business. I have been to other teams and it wasn’t the same feel. I was so blessed and fortunate to play here where you had such a tradition of great linebackers.”

As big a player as he was, the burly linebacker was supposedly an even bigger jokester, according to some of his ex-teammates.

“When I played I didn’t let my personality come out as much as everybody,” Kirkland said, according to Varley. “In the locker room I was a character. On the field I was more serious. Someone told me I should be a stand-up comic. I won’t go that far, but I like to have fun.”

After stepping away from the playing fields, Kirkland went back to his alma mater of Clemson University, working as the recruitment coordinator for the admissions department, where he lured in not only student-athletes but students to the campus. He’s also made several coaching stops along the way, including being the head coach at Shannon Forest Christian School in Greenville, SC as well as the linebackers coach at Florida A&M University. Perhaps an NFL coaching stint is in the cards? Whether that lies in Pittsburgh or elsewhere, the one thing that’s most fond to Kirkland is the time he spent there.

“They say once you are a Steeler you are always a Steeler,” Kirkland told Varley. “I really do believe that. It’s a team I will always cheer for.  I enjoyed being a Steeler, the tradition, the black and gold everywhere. The Rooney family is outstanding.”