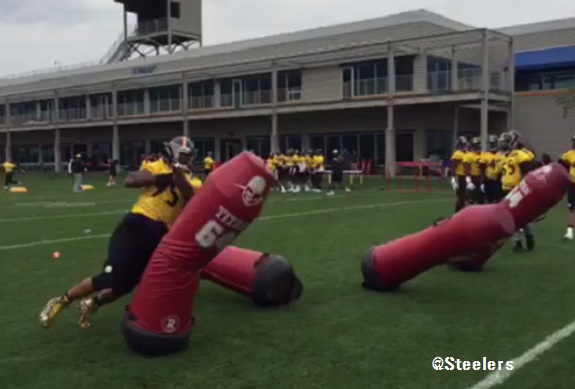 The Pittsburgh Steelers are looking for big things out of outside linebacker Jarvis Jones this season as the former first-round draft pick is coming off of a second season that saw him miss nine games due a wrist injury suffered during the third game of the year.

Thanks to a clip posted Wednesday morning on the Steelers official Twitter account, we get a good look at Jones working the bags during drills and they key thing here is that he looks healthy and fluid.

Jones spent some time during the offseason training with veteran James Harrison out in Arizona with a few of the other young linebackers and the hope is that he’s gotten stronger and that that strength shows up this year on the field.

The Steelers re-signed Harrison to push Jones this offseason and while he may be 37, he’s still trying to prove that he deserves to start ahead of the Georgia product.

We’ll get a better idea as to where Jones is currently at in his development when training camp gets underway later next month. He enters the 2015 season with three career sacks to his credit and 58 total tackles in 21 regular-season games played.

A look at Jarvis Jones during day 2 of #Steelers minicamp. https://t.co/N2Wio8mJgd