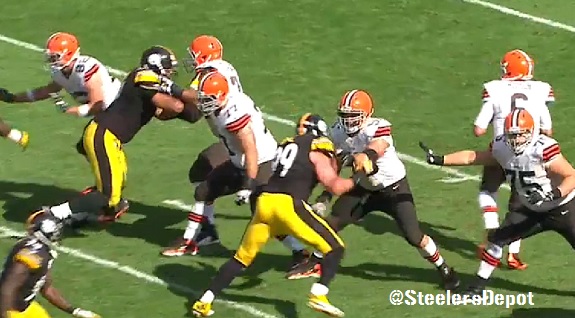 I felt compelled to write about Cameron Heyward this week, given that a player with about half his ability in Corey Liuget just signed a five-year, $50 million extension yesterday to remain with the San Diego Chargers for the foreseeable future. No disrespect meant to Liuget, who is a solid player in a league depleted of quality 3-4 ends, but it simply brought to the surface the pending contract situation with Heyward, who enters the last year of his current deal this season. Heyward should command more money on the open market than Liuget given his production (7.5 sacks last year to Liuget’s four) and progression as a complete 3-4 defensive end with the positional flexibility to kick inside if need be.

The Pittsburgh Steelers front office must making signing Heyward to a long-term deal their number one priority in the coming summer, as his loss would be devastating to a defensive line just now beginning to come into their own. Heyward is the unheralded star of not just his position group, but the Steelers defense as a whole. No one player means more to Pittsburgh’s reconstructive efforts on the defensive side of the ball than the Ohio State product, a point which became clear this season when Heyward’s elevated level of play helped return the team to the playoffs after a two-year drought.

Heyward was a good player in past seasons for Pittsburgh, but what really helped ascend his game to a new level this year was his development as a pass rusher. Today we will look at his ability to play with power and leverage when attacking the pocket, both crucial elements to pressuring the quarterback.

The first play we’ll look at is from Week 1 against the Cleveland Browns, when the Steelers’ AFC North rival was attempting to put the finishing touches on a furious second half comeback that had knotted the score at 27-all. The Browns had just forced a Steelers punt, setting themselves up for a game-winning drive with 1:52 left and a 1st-and-10 from their own 20-yard line. That’s when Heyward came up with one of the biggest momentum-swinging plays of the game.

The first thing you notice in the image below is Heyward’s get-off. He isn’t the most explosive athlete in the NFL, but he has a very solid and consistent first step. That consistency is an important detail to note, as many of the flashiest pass rushers in the league have a great first step, but their get-off timing is often extremely inconsistent. If you can’t learn to fire off the ball and utilize that explosive footwork, you’ve basically negated one of your top qualities as a pass rusher.

The second thing you’ll notice is how low Heyward fires off the snap. See how his helmet is almost level with the opposing lineman’s chest? The ability to play with adequate knee bend so as to expose a limited target to the blocker is crucial. Lineman rely heavily on their ability to punch and control defenders with their reach. If they have to overextend to reach the defender, or can’t land a blow because the pass rusher has left such a minimal target area to strike, it puts blockers at a severe disadvantage.

Heyward is actually stymied at first by Browns right tackle Mitchell Schwartz, but because he reveals such a limited area for the lineman to land his punch, Schwartz is unable to make the desired impact and halt Heyward’s push completely. Do you see how low Heyward is in that image? The ability to play with that kind of leverage, power, and hand placement absolutely ruins Schwartz’ pass set.

The above picture is one of my favorites, because Schwartz is currently in a position that no offensive lineman should be in, and he’s been put there by the power, motor, and leverage of Heyward’s pass rush. The Browns right tackle is rendered defenseless, failing to land his second punch while instead being forced back on his heels and off the balls of his feet, which is where lineman typically desire to play from. Heyward proceeds to run through the blocker and directly into Brian Hoyer’s lap for the pivotal sack. The Browns would go on to punt two plays later and give the Steelers optimal field position for Pittsburgh’s game-winning drive.

Should Hoyer have gotten rid of the football earlier in the play? Absolutely, his internal clock was exceptionally poor on this play, but still the technique and power of Heyward are on full display during a crucial point in the game. That is exactly what you want from your defensive leader, a precedent Heyward set in Week 1 and would continue to display the rest of the season.

Here’s Heyward using the same power/leverage combination to destroy Cleveland’s John Greco during the teams’ second meeting in Week 6 of last season. On a 3rd-and-13 early in the game, Heyward walks the right guard right back into his quarterback’s lap for the sack.

The hand usage by Heyward is just superb, as he’s constantly utilizing both arms to get into Greco’s chest and force the lineman off balance. Not only does this keep Greco from setting his feet or sinking his hips to anchor in pass protection, but Heyward’s reach also prohibits Greco from landing the punch that would stall the pass rusher’s efforts. The result is a helpless ride into the backfield to give up the first sack of the game.

One more for the road? Here’s Heyward absolutely pancaking Chiefs left guard Jeff Linkenbach in the first quarter of their Week 16 matchup, after the offensive lineman’s punch missed its mark wide and allowed Heyward a free shot at his chest. The Steelers defender wastes no time overpowering the off-balance Linkenbach, who isn’t aided any by tripping over the left foot of his teammate Rodney Hudson. Heyward’s romp over the veteran guard results in a quick pressure and an easy half-sack to share with James Harrison.

While Heyward’s ability to win consistently with power, length, hand usage, and leverage are impressive, it isn’t just his technical skill set that makes him special.  Tomorrow I’ll detail the quickness and well-developed pass-rush moves of the Steelers’ dynamic 3-4 defensive end, including a couple of sacks that were among the team’s most impressive during the 2014 season.