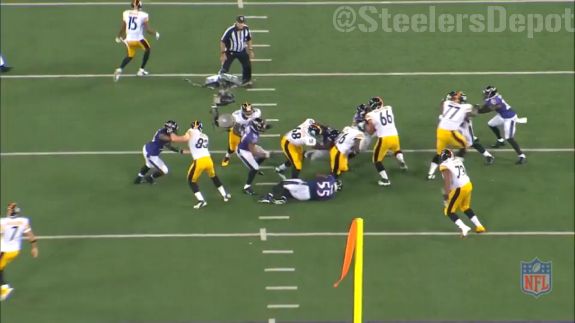 At most positions depth isn’t a problem for the Pittsburgh Steelers, but where that issue does manifest itself is along the offensive line, particularly at the tackle spots. While it is true that the Steelers’ offensive line appears to be as stable a group as the organization has featured in many years, injuries could derail a strong unit.

The interior line seems set, as Maurkice Pouncey and David DeCastro are probably the best individual players along the Pittsburgh offensive front. Ramon Foster is the weak link of the three, but he’s capable of holding his own in most match-ups. Behind those starters are Cody Wallace and new fan-favorite B.J. Finney, who both have the versatility to play center or guard. The team also appears enamored with Chris Hubbard, who has filled in for Foster with the starters when the veteran lineman was absent during OTAs.

The group is solid, but unspectacular, meaning that losing Pouncey or DeCastro would definitely hurt, but the drop-off in play might not be as dramatic as it would have been in the past. Wallace has stepped into the lineup before and been a suitable replacement, so some trust has developed there with the coaching staff.

Not so at offensive tackle, where depth issues abound behind starters Kelvin Beachum and Marcus Gilbert. Beachum, who started every game last year and improved dramatically as the season went on, played much of his career at guard before taking over full-time as the team’s starting left tackle in 2014. Gilbert signed a healthy extension before last season, but had a rough start to the year and ended up missing four games due to injury.

If another mishap were to befall either Steelers tackle, the situation could get dire quickly in Pittsburgh. The only backup with any experience is the miserable Mike Adams, who was atrocious when filling in for Gilbert last season. One of just two Steelers to register a “Poor Starter” grade on Pro Football Focus’ 2015 depth chart rankings (the other was Cam Thomas), Adams has failed to develop in three years, which had led many to speculate he could be released this offseason.

I could easily see that happening due to Adams’ poor level of play, but the problem is the Steelers have nothing behind him. Mitchell Van Dyk and Alejandro Villanueva are second-year developmental pieces who have never appeared in an NFL game, and Kevin Whimpey is a rookie undrafted free agent out of Utah State, whose frame isn’t NFL-ready at all. Chances of any of those three even making the team are slim, let alone seeing live NFL game action.

The problem becomes the fact that Pittsburgh has plenty of tackle-to-guard versatility, but very little of that same versatility when it comes to making the switch to tackle from the interior. Hubbard played tackle in college at Alabama-Birmingham, but doesn’t have the ideal length or power for the position. That almost leaves the Steelers stuck with Adams, not only on their roster, but as their first offensive tackle option off the bench.

So when you say your prayers for Ben Roethlisberger’s health at night Steelers’ fans, add Beachum and Gilbert to your list. Lord knows if they go down, Ben could be soon to follow.