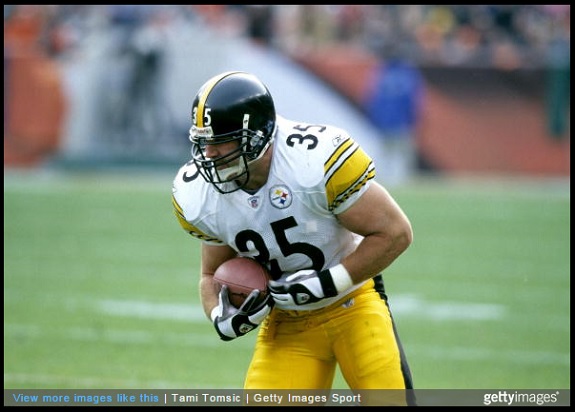 Long a fan favorite of the team, former Steelers fullback Dan Kreider seems to have been one of the last in a breed of dinosaurs at the position. In this, I mean the lead blocking, throwback-style fullbacks whose face masks got mangled each and every game and who’s primary responsibility was running into a brick wall of defenders on every play, while the running back’s who they blocked for received all the stats and glory.

A three-year starter at fullback for the University of New Hampshire, Kreider was in talks with a few teams leading up to the 2000 NFL Draft, including Pittsburgh and Miami.

“After the draft, I talked to the Steelers and they said, ‘Hey, come on in, we only have one fullback, Jon Witman, on the roster,’ so my agent and I felt this was the best fit,” Kreider said, according to Tom Arnold, a correspondent for LancasterOnline.com. “Miami wanted me to come down and try out.”

After going undrafted, he was picked up by Pittsburgh and eventually landed onto the practice squad. He actually lauds being put on the practice squad, even calling it a break of sorts, almost like a full college season between the practices and preseason games. However, five games into the season, his “redshirt” was removed whenever Witman went down with an injury and Kreider was pressed into duty, playing in the final 10 games. He was even voted by his teammates as the “Rookie of the Year” ahead of first and second-round picks like Plaxico Burress and Marvel Smith.

Despite never making a Pro Bowl, he was revered by fans as a punishing lead blocker for the likes of the soon-to-be Canton-bound Jerome Bettis, Duce Staley, Amos Zereoue and Willie Parker. His playing days in Pittsburgh ended after eight seasons and, much like many former Steelers, he ended his career with the “Pittsburgh West” of the NFL, the Arizona Cardinals in 2009.

Since his retirement from the game, Kreider has kept himself busy, including the joys of being a father and family man. His father, his brother and Dan all own investment properties around his hometown of Lancaster, PA and they work together maintaining them.

“I do everything from moving stuff around to maintenance,” he said, according to Arnold. “I keep myself busy.”

Post-football, Kreider shares the views of a lot of the “armchair quarterbacks” out there, including views on the concussion protocol of the league.

“When you’re a young guy coming up, you want to play through any type of injury,” Kreider said, according to Arnold. “You want to go out and impress the coaches. I can remember a couple times I went back on the field, and now I think, ‘What was I doing?’ ”

I hope the next generation of players will be better educated about the effects of concussions.”

He also feels players should step away from the game when the time is right, and doesn’t fault many of the younger players this past off season who, in their primes, decided to hang up the cleats, including several 49ers. In fact, Kreider injured his neck after signing with Arizona, and he didn’t make the decision: his body made it for him.

“One day while working out I felt something pop in my neck,” he said, according to Arnold. “I tried to play through it, but eventually had to tell the staff. After the 2009 season, they offered me a contract but there were too many stipulations, so I felt it was my body telling me to retire.”