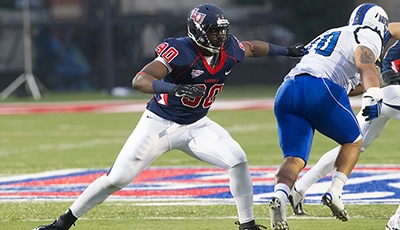 Dominique Davis always figured to be working on Sundays. Just not in football. Now, he’s a defensive end for the Pittsburgh Steelers. It was the church where Davis thought came calling. Out of high school, he enrolled in the Florida School of Discipleship to practice his faith.

Like any school, it wasn’t cheap, and Davis decided to take an unusual step to earn money.

Alongside the sandy beaches of Fort Myers, he became a street performer. His acts included “krump” dancing, a talent that he learned while spending over a decade at The Buffalo Dream Center ministry, and spray-painting a suit and mask to mimic The Tin Man.

“Kids would walk up, and they’d be like ‘Is it real?’ Then I’d move and they’d scream. It was fun. People would come up and take pictures…I could make probably $40 an hour just doing that…It definitely helped to pay the bills,” he told The Buffalo News.

In his second year at school, a friend suggested giving football another chance. Sports had always been apart of Davis’, who goes by “Niko,” life at Lafayette High School right outside of Buffalo. He swam all four years, was a member of his track and field team, while playing tight end and defensive end for three seasons.

But playing beyond the high school level never crossed his mind. It wasn’t for a lack of talent. Schools as big as Syracuse paid him a visit but Davis wasn’t educated in the recruiting process.

“I remember one guy said to me, ‘OK, the only thing we need now is your film.’ I was like, ‘I didn’t know I was supposed to have it.’ I didn’t have one clip of myself.”

Liberty, a private FCS school, had the perfect mixture of football and religion. It was current New York Giants running back Rashad Jennings, still with Liberty at the time, who sold Davis on attending when he visited.

Off the field, it’s a choice Davis still doesn’t regret.

“If you’re looking for great people to be around and get you to grow and be around and find the Lord, you’ll find that as well. That’s the predominant culture here, but it’s all about how the view the experience,” he told The USA Today last year.

Defensive end wasn’t his first position. He bounced from wide receiver, then to tight end, and despite excellent hands, head coach Danny Rocco moved him to defensive end.

Rocco took a job at Richmond after Davis’ freshman year but was replaced by the capable Turner Gill, credited with putting Buffalo on the map.

Private schools aren’t cheap and money was still an issue. Scholarships and financial aid weren’t enough. It was time to find a job and Davis, again, went the unconventional route.

The gig? Donating plasma in his arms. Twice a week for $55.

His dedication to the gym added on 45 pounds by graduation and in 2013, his tape started to show his progression. However, a foot fracture that never fully healed hindered his stats and he finished the year with only six tackles, far off the NFL’s radar.

Until his position coach stepped in. One with some credibility, too. Vantz Singletary, nephew of former Chicago Bears linebacker Mike Singletary, and one who coached alongside his uncle with the San Francisco 49ers for two seasons, made the proactive step in getting in scouts’ ears.

“I’ve been around greatness. I know what they look like. I know how they walk. I know how they talk. Niko has all of the tools. … The wingspan, the big hands, the long arms. When you watch him walk around in his Under Armour, I mean he can go pose for any magazine. He has that kind of physique.”

Singletary brought Davis in the room to let him listen to the scouts’ words. It shouldn’t be a surprise that with that motivation, and moving inside from defensive end to defensive tackle, his game exploded in 2014. He wound up with 61 tackles, 12.5 TFL, and 7.5 sacks as the Flames’ defensive captain. One of those games came against the nationally ranked North Carolina Tar Heels, a game where Liberty led into the third quarter mind you, and Davis paced the defense with nine tackles.

His coaches have praised his mental game as much as his physical, Singletary saying, “anything you’d tell him, he’d soak it up like a sponge.”

Failing to get drafted, Davis and his agent determined Pittsburgh was the best fit. And the rookie lineman knows what it is going to take to stick in the league.

“I’ve got to make a name for myself. The name of the game in the NFL is making plays.”