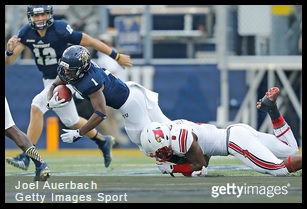 It’s not often that a seventh-round draft pick elicits such a significant amount of discussion on the day that he’s drafted, but the truth of the matter is that new Pittsburgh Steelers free safety Gerod Holliman is an extremely intriguing player because of the disparity present in his scouting report.

Holliman has a lot of the physical tools you look for in a safety. He’s got good height and has some bulk to him, even if he needs to add more functional strength. Some of his Pro Day numbers don’t pop out at you, but are in a fair range for a safety.

He was the Jim Thorpe Award winner for the best defensive back during the 2014 season when he tied an NCAA record with his 14 interceptions, and he added another 17 passes defended during the year, which is phenomenal production.

And yet he has a reputation for being averse to contact, which, while perhaps not entirely fair, has at least some degree of truth to it from the tape that I have seen. He’s the type of player that will  run up to a pile and then skirt around the edge while a teammate makes the tackle, regardless of whether or not  he could have prevented an extra yard or two.

Some of that seeming aversion could extend from a shoulder injury that he suffered in 2012 and forced him into a redshirt year, but if that is the case, then he needs to overcome that aversion.

I have read that it was his left shoulder that he injured, and this seems to be confirmed on tape, as he heavily favors leaning with his right shoulder in contact, although this will be discussed more tomorrow.

His issues are not just in will, however. He also has fundamental flaws in his technique that will not only get the job done, but will lead to injury. I’ve seen him shoulder tackle a back who weighs heavier than him without using his arm at all. Just shoulder. And of course he took the brunt of the hurt in that collision.

It goes without saying that because of his tackling issues, he could find that he has an uphill battle when it comes to earning a roster spot, while may well have to be earned on special teams.

But I don’t believe it’s impossible for him to contribute on special teams. After all, Emmanuel Sanders was making tackles as a rookie, and if he can manage to do that to get on the field, I would imagine that a free safety can muster it.

Whether or not he’s special teams-capable is not the same thing as earning a spot on special teams, however, as the safety position is currently full of special teams specialists.

It’s worth noting that Holliman’s defensive coordinator at Louisville gave him a vote of confidence when it comes to cleaning up his technique, saying that a lot of redshirt sophomores are far from NFL-ready at that point. The as of today 21-year-old still has a lot of growing up to do.

But tomorrow I will take a look at his last collegiate game in the Belk Bowl, which was the one game that he played after deciding to turn pro, knowing that he had work to do to shed his reputation as a poor tackler, so we’ll see what that tape has to say.