It’s one of the most couple combination passing concepts in the NFL. It exists in ever team’s playbook, including the Pittsburgh Steelers. I’ve talked about it multiple times in my game breakdowns or scouting reports but have never devoted an entire post to it.

Today, we’re going to break down the three man “spot” route. A concept which gives your quarterbacks easy reads and several options.

The spot – also referred to as a “snag” route – involves three routes: flat, curl (spot/snag), and corner. The progression: flat, snag, corner. The goal: stress the flat defender. You’ve heard me talk about the importance of stressing a defense. It’s the best way to win. Put defenders in lose-lose situations. Throw the ball where they don’t. Play simple, play best.

We’ll start off by showing the concept on the board. 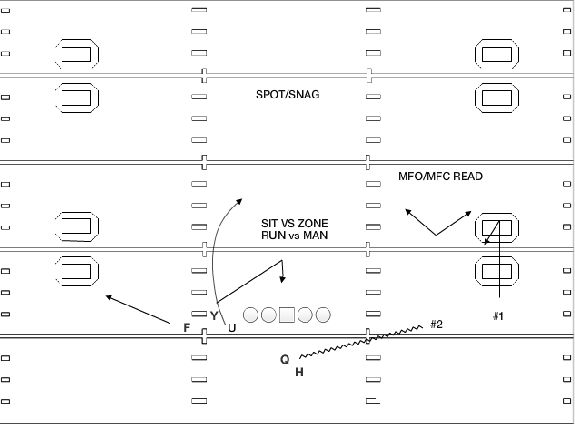 This can be run out of multiple personnel. A WR/TE/HB combination is quite common. For the purposes of the play we’ll put up on tape, we’ll stay consistent and show it out of 13 personnel. Le’Veon Bell starts in the backfield but is motioned out to the open side, creating an empty set.

The routes, working from the backside to frontside:

#2: Bell’s route is likely a read. Against two high, which we have here, he’ll convert his route to a post and split the safeties. Against single high, he’ll keep vertical and stem away from the deep safety, basically turning the backside into a smash route.

U: We’re not going to get a corner route here. Instead, Heath Miller will bend his route inside but it works the same. A vertical threat to get on the toes of the cornerback to create space in the flat.

Y: This is Matt Spaeth. The “spot/snag” of the design. Curl to the middle of the field. Find grass. Sit against zone and show the QB your numbers. Sit as soon as you can, you don’t want to run into the farside linebacker and tighten the window on the throw. Pivot and run away against man coverage. 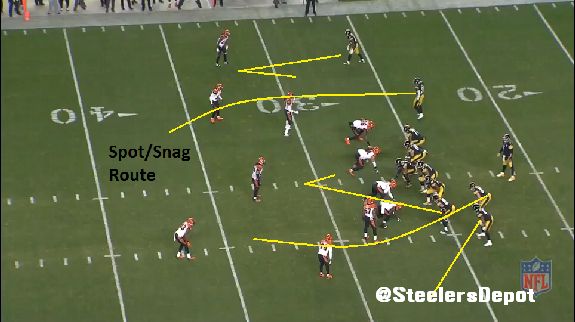 It appears the field side cornerback is the flat defender. But Miller’s vertical stem helps run him off. 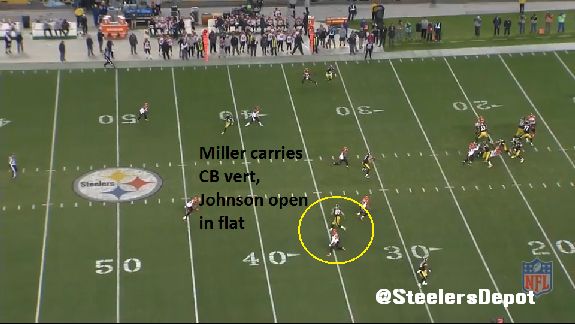 And the SAM linebacker has no chance to defend it and probably isn’t even responsible to. Johnson is wide open in the flat. 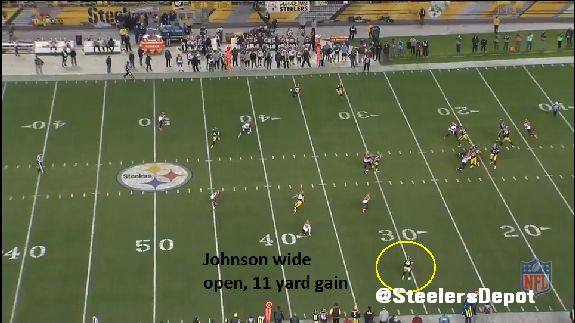 Roethlisberger nearly hits Spaeth but with the linebacker closing and an open Johnson, it’s an easy decision. Ben comes off the read and hits the fullback for an easy 11 yard pickup.

The beauty of the spot concept, as I’ve alluded to, is in its simplicity and multiplicity. Stretching half the field vertically and horizontally, creating spacing for easy completions that offer some YAC.