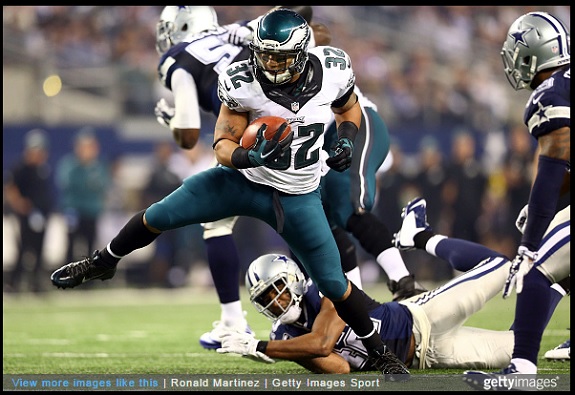 Earning $1.542 million a season in 2015 as a backup running back in the NFL is probably not a bad gig if you can get it, but that payday wasn’t evidently big enough for Chris Polk to sign his restricted tender prior to the start of the Philadelphia Eagles offseason program. As a result of him not signing it earlier, Polk risked the Eagles rescinding it at any time and that’s exactly what they did on Friday.

Now that the Eagles have pulled that offer away from Polk, he’s now considered a free agent and can sign with any team he wants without restrictions. While there’s a good shot he’ll eventually land somewhere, he’ll be lucky to get more than the $1.542 million he could’ve possibly received from the Eagles had he made their final 53 man roster.

Perhaps Polk wanted to have an opportunity to freely shop his services elsewhere as the Eagles are currently set at running back after signing DeMarco Murray and Ryan Mathews this offseason to compliment Darren Sproles. Face it, Polk, who joined the Eagles as an undrafted free agent out of Washington in 2012, didn’t stand a chance at seeing the field based on that depth chart.

Where will Polk land now and is Pittsburgh an option?

Being as Polk will likely need to sign a one or two-year deal for near or at the minimum at this point of the offseason, I think the Steelers would be wise to at least look at his film and lob a phone call his way.

For starters, the Steelers are currently scheduled to be without starting running back Le’Veon Bell for the first three games of the 2015 season and while veteran DeAngelo Williams was signed during the offseason to be his primary backup and the temporary starter, the team has nothing but inexperience behind him in Dri Archer and Josh Harris.

While Polk only has 57 career carries to his credit, he has found the end zone seven times. Additionally, 11 of his 57 carries have come with the Eagles offense needing three or less yards and he converted nine of those opportunities into either a first down or a touchdown. Five other runs of his that came on first downs resulted in 10 or more yards gained.

While Polk only caught six passes during his three seasons with his Eagles, he showed in college that he can be a threat in that area out of the backfield as he had 78 total receptions during his final three years at Washington.

On top of everything else, Polk can also play on several special team units. Last season with Eagles, the 5-11, 222-pound running back returned 11 kickoffs for a 30.9 yard average and one of those he brought back 102 yards for a touchdown. He also recorded five total special teams tackles in 2014 and had four in 2013. He’s worth a minimum contract for those tackle stats alone.

So far this offseason, the Steelers have appeared to be interested in adding a bigger back in the later rounds of the upcoming 2015 NFL Draft. If they were to sign Polk, instead, that wouldn’t be necessary and they could use that pick on another position. The added competition for Archer and Harris also wouldn’t be a bad thing and the three could then battle for two spots on the opening week 53 man roster being as Bell won’t be listed on it.