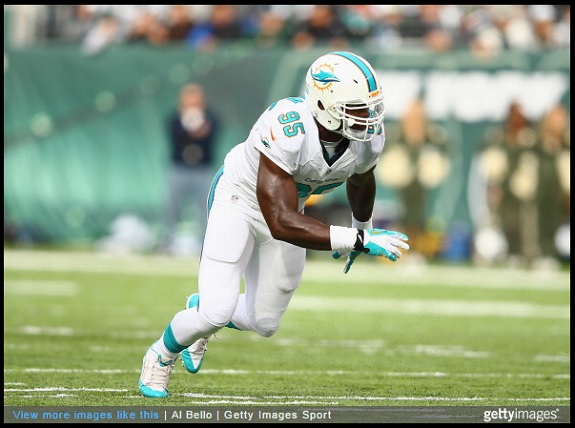 The Miami Dolphins will be without the services of edge-rusher Dion Jordan for the entire 2015 season as it was announced Tuesday that the former first-round draft pick is being suspended for a full year for another substance abuse policy violation.

This news comes courtesy of Adam Schefter of ESPN and he also passed along word that Jordan did not fail a drug test this time. Instead, it was determined that one of his test samples was diluted, which counts as a strike.

Dion Jordan, 3rd pick in 2013, is being suspended for 2015 season for another substance abuse policy violation, league sources told ESPN.

While Dion Jordan did not fail a drug test, per sources, NFL determined one of his test samples was diluted, which counts as a strike.

Jordan, who was third-overall selection in 2013, was suspended for the first four games of the 2014 season last July for violating the NFL’s performance enhancing substance policy. Last September, the Oregon product again violated the drug policy and was given an additional two games.

In the 10 games that Jordan did play in last season, he registered just 20 total tackles and one sack.

It will be interesting to see if the Dolphins draft an edge-rusher with the 14th overall selection in the upcoming 2015 NFL Draft now that they know they’ll be without the services of Jordan for the season.