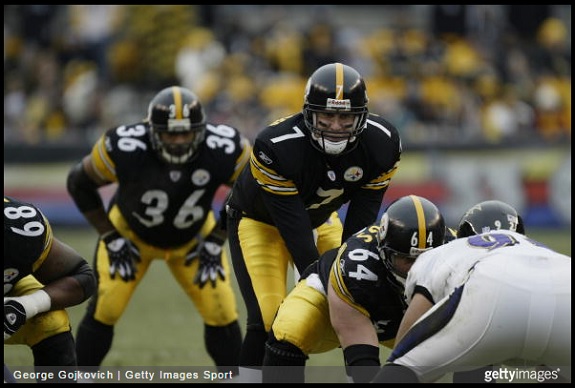 Lost in all the hoopla of the James Farrior’s and Ryan Clark’s, or the massive trade with the St. Louis Rams for Jerome Bettis as the “best free agent moves in Pittsburgh Steelers history” lies the signing of center Jeff Hartings in 2001. A two-time All-American for Joe Paterno’s Penn State Nittany Lions, he was the first rounder of the Detroit Lions in the ’96 draft. It was there that he began his career blocking for one Hall of Fame running back in Barry Sanders, but little did he know when signing with the Steelers that he’d get the privilege to pave the way for another.

The position of center in Pittsburgh is a storied one in itself, with the late Mike Webster and Dermontti Dawson setting the bar high. The torch is still carried on proudly to this day by Maurkice Pouncey. It seems as though each great center gets the privilege to block for a banner running back in Pittsburgh. Webster blocked for Franco Harris, Dawson for both Barry Foster and Bettis and Pouncey presently for Le’Veon Bell. So when Hartings signed in ’01, he had some lofty expectations, having only played guard up to that point in his career. The move to center paid off well, as he teamed with guard Alan Faneca to form a dominating Pro-Bowl interior, blowing open holes for extra-large runner and soon-to-be Canton-bound Bettis.

“First of all his foot quickness, the skills that he had, the lateral movement with his quickness, balance and power,” said Hartings on steelers.com.  “It was amazing the agility, foot quickness and lateral quickness he had despite him being a big running back.”

Up until Pittsburgh, Hartings had only blocked for the 5-foot-8, 200-pound Pro-Bowl jitterbug Sanders, who’s size might’ve equaled one of Bettis’ thighs, making his impressive ability even more impressive to Hartings.

“It was a blessing,” he said. “The enjoyment of being able to block for him and being on the field watching what he did, it was amazing. I remember watching him get through the hole and just run over a defensive back and get another five, ten, fifteen yards. He was so enjoyable to watch.”

Coming up this summer, the two-time Pro Bowler is eagerly awaiting the moment when he gets to watch his friend achieve the ultimate individual glory, getting inducted into the 2015 class of the Pro Football Hall of Fame. The fact that it took five years for him to get in leaves a bad taste in Hartings’ mouth though.

“The fact that it took five years, I know he is grateful but I felt like he should have been a first ballot,” he said.  “I look at Jerome, the career he had, even thinking he wouldn’t make the Hall of Fame was an insult.”

However, Bettis is being enshrined as one of the best to ever play the game, an honor many seek but only few get to live out. And after his storybook ending in Super Bowl XL, it’s icing on the cake for the fan-favorite running back.

“It’s been a long time coming,” said Hartings. “When he retired you knew he would be in the Hall of Fame, the question was would he be a first-ballot selection,” Hartings said. “This is so well deserved for him and his family and I couldn’t be happier for Jerome.”