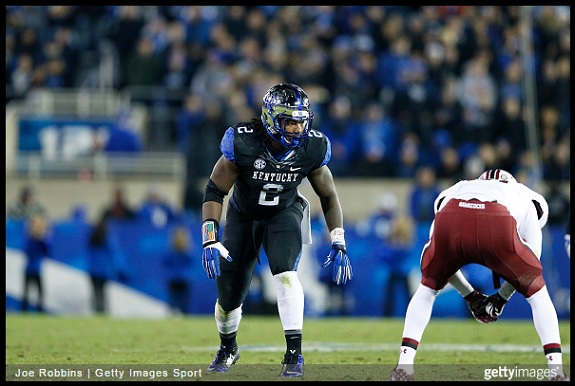 ESPN draft analyst Todd McShay has a new mock draft out as of Wednesday and after previously selecting Oregon defensive end Arik Armstead for the Pittsburgh Steelers, he now has Kentucky outside linebacker Alvin “Bud” Dupree as the team’s 22nd overall pick in the first-round of the 2015 NFL Draft.

Cornerback is a big need for the Steelers, so Kevin Johnson and Marcus Peters are possibilities here. But they are also coming off a season in which they had the fewest sacks (33) since 1989, and they don’t have an impact pass-rusher. Dupree is raw, and needs to show more consistency at the point of attack. But he is an excellent athlete who has tremendous range versus the run, upside as a pass-rusher and the ability to drop in coverage when asked.

I feels like we are coming full-circle with these major media mocks as it seems like Dupree was the popular choice for the Steelers several months ago. He certainly is a fit for the Steelers and the organization does have some level of interest in him being as they made sure to attend his March Pro Day. However, to my knowledge, Dupree hasn’t been to Pittsburgh for a pre-draft visit.

In case you’re curious, McShay only has one cornerback off the board come time for the Steelers pick in his latest mock and that player is Michigan State’s Trae Waynes, who he has going to the Minnesota Vikings with the 11th overall selection. After the Steelers selection, McShay has three more cornerbacks being drafted and they are Kevin Johnson, Byron Jones and Marcus Peters, who he has going to the New England Patriots with 32nd overall selection.

As for Armstead this time around, McShay has him being drafted by the San Francisco 49ers with the 15th overall selection.