Over the weekend we asked you to rank 10 of the top cornerbacks in the 2015 NFL Draft as they relate to the Pittsburgh Steelers and after 318 responses, the results are below. 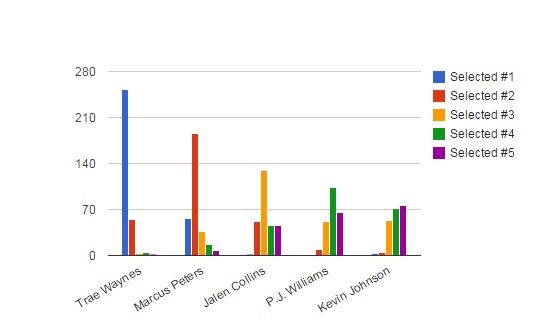 As expected, Trae Waynes was the easy winner with Marcus Peters coming in second. Jalen Collins was easily the third ranked cornerback, but after the top three, however, you can see where the indecision begins and especially at No. 5 with Kevin Johnson.

When you look at these rankings, are you starting to get the feeling that a few of these players might skip into the third round, or in the case of Byron Jones and Steven Nelson, maybe even the fourth?

Thank you to everyone that voted and we will have another draft rankings poll for you to vote in soon.