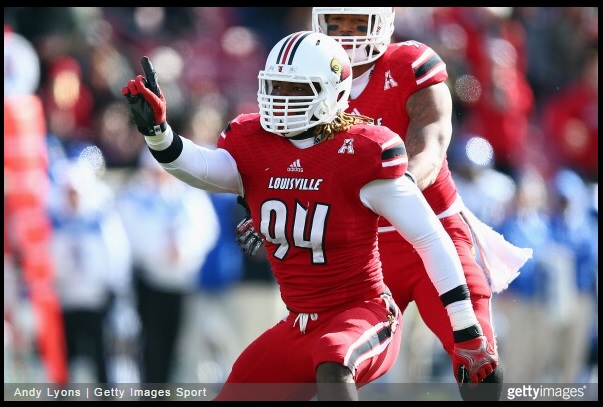 Every year, leading up to the draft, there seems to be a select few players who have overcame incredible odds, players who have us pulling extra hard for them to achieve their dreams of NFL glory. From the story of Michael Oher, to Boston College and current New York Giants‘ Mark Herzlich triumphing over cancer, there always exists a feel good story, ready for a fairy tale ending come draft day. This year is no different, and it features a player who should probably be on the Pittsburgh Steelers‘ radar, considering their need for a pass rusher.

Louisville’s Lorenzo Mauldin, an outside linebacker/defensive end hybrid, knows what it’s like to have the short end of the stick growing up, and it’s the source of the fire that burns from deep within. At the tender age of 2, yes 2, Mauldin knew nothing about having a family, or about having a place to call home. He had no parental figures or role models to teach him right from wrong, as his father was in jail and about as nonexistent as can be. Meanwhile, his mother battled addiction demons, sometimes getting out of jail long enough where she couldn’t stay out of the way of her own two feet, before landing back in.

“I would tell her, “Mom, you’ve got to stop drinking. That’s the reason why you keep getting incarcerated, because of your drinking habits,” Mauldin said.

He was ultimately juggled between 16 different foster families, often lasting in one for only a couple months before being sent packing. His four siblings? He was split up from them, with just his younger brother with him for most of his upbringing.

“I felt like I was on my own,” he said. “I didn’t want anybody to help me out. I wanted to just do everything on my own because nobody could do anything for me. All I wanted was my brother or my family together, you know?”

He got a reality check in high school though, when his brother became incarcerated, and Mauldin himself ran afoul with the law a couple times as well. Since nobody cared about him, why should he care about himself? He discovered football as his saving grace though, and a way to not retread the problematic footsteps of his parents. At the age of 16, he had a maturity and wisdom beyond his years, and under the guidance of one of his foster mothers, he went to a small football camp, where she told him to give it a shot. His football success ultimately landed him a bunch of scholarships, and he ultimately committed to Steve Spurrier and the University of South Carolina.

“I’m the first to go to college out of all my siblings,” he said. “I feel like I’m part of something that can be very outstanding, and I’m glad to put the Mauldin name out there, to fill the gaps of what my family has been through.”

Again, a letdown was waiting, as days before signing day, his grades prevented him from signing, and Spurrier gave away his scholarship. After heading back to the drawing board, Mauldin received calls from Louisville and former head coach Charlie Strong. After retaking his SAT’s, Mauldin finally was eligible, and off to Louisville. At first, it was very trying for Mauldin, as college football was completely different from what he had known prior, and he had a tough time dealing with disciplined coaching.

“He never had a male figure in his life really get on him about the little things he was doing,” said former defensive line coach Clint Hurtt. “He had a tough time trusting men. He had put his trust in so many people and was always let down. He’s been through a lot of things that adults my age have never gone through.”

Mauldin is the first to admit, entering college, he didn’t trust male figures.

“I was raised by all women when it came to me being in foster homes,” he said. “Going to a new school or new state and you’ve got a bunch of men yelling at you and you don’t really know what’s going on.”

When Mauldin finally opened his shell, his football skills were put on full display, as he blossomed as a junior defensive end, recording 9 and a half sacks. When Strong left for the Texas job, and Hurtt left for the Chicago Bears, Mauldin was again left at square one. This time, he embraced the new Louisville staff, and capped his senior year with first-team All-ACC honors including 6 and a half sacks, along with 13 tackles-for-loss from his new outside linebacker spot. And on Senior Day, he had a familiar face there by his side, in Hurtt.

“He could have blamed everybody else for what happened in his life, but he’s never taken that stance,” Hurtt said. “He has been the total opposite. He tries to see the brighter side of life. He cares about everybody else before he cares about himself. That’s how he’s always been.”

At 6-foot-4 and nearly 260 pounds, he fits the bill from a size standpoint as the Steelers look to get bigger at the position. His experience playing both a 4-3 defensive end and linebacker in an odd front should only add to his appeal to the team. This past weekend at the combine, he posted respectable numbers, including a 4.85 in the 40, 23 bench reps at 225, and a 32-inch vertical. While one of his counterparts, Kentucky’s Alvin Dupree displayed his ridiculous skillset Sunday, his game film suggests otherwise, as he disappears at times. That’s one thing going for Mauldin, his motor neither runs hot nor cold, but is relentless, and could be attributed to his rough upbringing.

“He overcame a tough childhood and developed a mindset that nothing is going to stop him,” said one NFC North scout. “He works his butt off and he wants to be great.”

He’s saying all the right things, which should also be a bonus for the team, and it doesn’t appear as if he’ll be getting any fines from Roger Goodell anytime soon.

“Being raised by women, that just made me have more respect for women,” he said. “For someone to take someone in, such as myself, a child that’s not theirs, bring someone else’s child into their home and care for them, love for them, I can say I’ve become a feminist. I respect women to the utmost.”

If Sunday was any indication, top rushers like Vic Beasley, Dupree, Randy Gregory, Dante Fowler Jr., and Shane Ray may all be off the board when the Steelers select at 22. It is very possible one slips through the cracks, with Ray being called out by a scout recently as not being able to transtition to the outside linebacker spot. If Ray were there at 22, his explosion and mean temperament should have the Steelers running to the podium. However, it’s very possible they go cornerback in round 1, a first since ’97, and add their rusher(s) later. If rounds 2 or 3 come, and Mauldin is there, his production and high football character could very well vault him into a black and gold uniform.

“I feel in place when I have a family environment around because I feel like I’m wanted,” he said. “I feel like I need to help out this and that. It’s a heartwarming situation for me.”