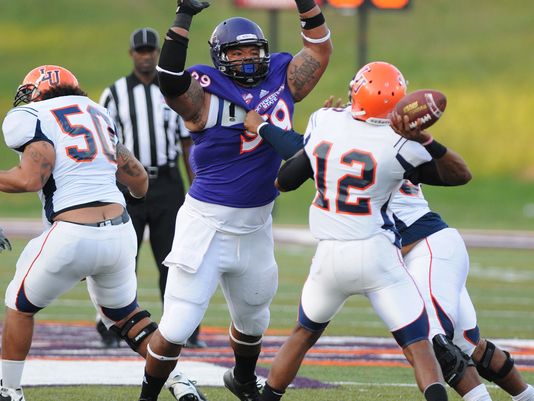 In football, when you’re on the wrong end of a 70-6 walloping, there’s not a whole lot of positives to pick out of the rubble. This is what happened to outmatched Northwestern State this past season at the hands of powerful #10 ranked Baylor. However, it was the play of one Demons’ defender that has NFL scouts sold. Deon Simon, a 6-foot-4, 325-pound defensive tackle, was a disruptive force all game long, clogging running lanes even though Baylor destroyed the team through the air in a drubbing.

“Simon was almost single-handedly responsible for slowing down the Bears’ rushing game,” Around the NFL’s Conor Orr stated.

He went on to say that NFL scouts would also label that game as the moment Simon placed himself squarely on the NFL radar.

“I was getting asked questions about whether I could play up to that level,” Simon, a team captain, said. “Those games we were really the underdogs and I wanted to be the one on my team to stand out.”

It was his play as a junior that had scouts frequenting the NSU campus leading up to his senior season, and often left them drooling, as evidenced on a particular play where he absolutely rag-dolled two UAB offensive lineman-one with each arm. However, leading up to his last season was when he finally realized the NFL was a real possibility. Despite facing double-teams nearly every play, and missing the last five games with an MCL sprain, he recorded 26 tackles, 5 and-a-half tackles-for-loss, 1 sack and 2 forced fumbles. He was a beloved teammate, being selected by his fellow defensive linemen as the position’s representative on the Demon Deacons, the team’s leadership group. He received a Christmas present in late December when he received his invitation to the upcoming NFL Combine.

“I wasn’t really expecting it ,” Simon said. “I had different scouts coming and looking at me throughout my NSU career, but the invitation really brought to my attention that this is possible.”

He’s been working hard in preparation for the combine, looking to improve both his power and speed. He says the knee that shortened his senior campaign is fully healed, and he’s ready to show his stuff for all in attendance.  Some comparisons, as far as both small-school backgrounds and physical attributes are the New York Jets Damon Harrison, and the Kansas City Chiefs Pro Bowler Dontari Poe. Poe, once linked to the Pittsburgh Steelers in many mock drafts, was a relative unknown coming out of the University of Memphis, who set fire to the 2012 combine, posting a ridiculous 40 time of 4.98 for a man who goes 6-foot-4, and 346 pounds. He also showed superhuman strength, posting 44 reps at 225 pounds, and his freakish numbers sent his draft stock into the clouds, something Simon hopes to emulate. He’s reportedly already hit 41 reps in training, and hopes the adrenaline boost in front of coaches and general managers will give him a little extra.

“I’ve worked on my 40-yard dash time, getting really flexible and working on my speed,” he said.  “Nobody’s said anything specific of what they want to see from me at the combine, but if I’m taking a guess, I would say they want to see me move laterally and see how I move at my weight.”

What they also want to see is how players react to being questioned, analyzed and basically put under a microscope during the interview process there. Just like his training regimen from a physical standpoint, Simon is already plenty ready from a mental standpoint as well. He’s been prepping for it, getting scrutinized by former Chicago Bears GM Jerry Angelo, in hopes that it will prepare him for a wide array of questions, ranging from his favorite foods, to his sexual preferences. The agency, Exclusive Sports Group, uses Angelo as a consultant for the combine prep.

“He gave us a ton of information, especially on what type of questions will be asked,” Simon said.  “Basically, they want to know my background, whether or not I live with my mom or dad, what type of neighborhood I grew up in. Some of the questions took me by surprise, but some I had a feel for.”

He’s one of only four defensive tackles of the nearly 20 at the combine that were designated as a pure 3-4 nose, with his biggest competition being the powerful Danny Shelton, another potential player on the Steelers’ radar. NFL.com’s Lance Zierlein labels Simon a “powerful tackle that shows potential to be a run-stopper.”

“Displays a powerful upper half with ability to manhandle centers or undersized guards,” Zierlein said.

With Steve McLendon entering the final year of his contract, and approaching 30, coupled with the raw but powerful Daniel McCullers still an uncertainty, the Steelers may become intrigued with Simon. He seems to have enough versatility to play any spot along the line, and if nothing else, could offer quality depth at both tackle and end. Normally a player would be nervous at the biggest job interview of their lives, but Simon says he’s instead excited.

“I’ve been looking forward to this day through seven weeks of training now,” Simon said. “You have to leave it up to those people who choose and pick. I leave it in God’s hands.”

Depending if he shows well this weekend, he could very well wind up in the Steelers’ hands as a mid-round pick.