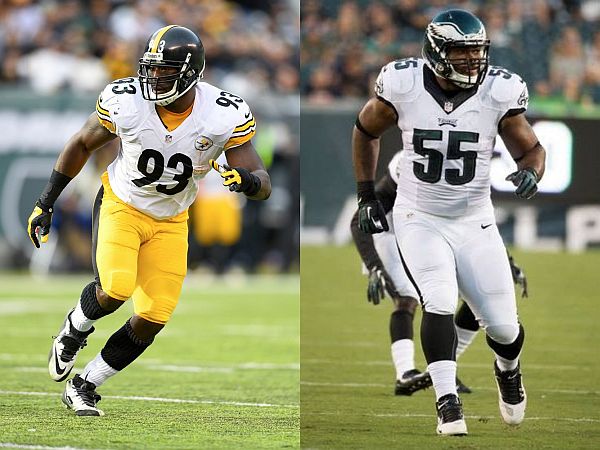 Last offseason, the Pittsburgh Steelers‘ brass slapped the transition tag on outside linebacker Jason Worilds, and the return they got for their $9.754 million investment was a modest 7.5 sacks. With the start of the frenzy known as free agency still over a month away, GM Kevin Colbert isn’t tipping his hand just yet, but did say they haven’t completely ruled out using that same tag on Worilds again.

“I don’t think you’ve seen the best of him, either, as a Steeler or as a potential player for someone else’s team,” Colbert stated. “He is definitely someone that we will consider keeping. We will see where the market goes.”

Although silly to think the team would pay even MORE money for seemingly average play from Worilds, the front office is in somewhat of a dilemma, being that Jarvis Jones is the only other outside linebacker signed through the 2015 season. Colbert did add though that the team’s use of the tag really isn’t their favorite thing to do. In a way, Worilds kind of has the team by the throat, seemingly forcing their hand into letting an accustomed player in their system walk out the door, while being left with a relative unknown in Jones and possibly bring back James Harrison for another year. Or, the team could dip their toes once again into the free agency pool, and they could find a logical replacement by looking right up the Interstate.

Worilds did it last year, along with the Vikings’ Everson Griffin. Every year across the NFL landscape, we see players in contract years parlay their play that year into a nice, fat paycheck. Brandon Graham of the Eagles is the latest example, last season demonstrating why he’s deserving of such. Despite not even starting for the team, the talented former-first rounder out of Michigan was a menace, leading all NFL defensive players in Pro Football Focus’ pass rushing statistics. Basically, “PFF” grades players, over not only the course of games, but on an individual play-by-play basis, and well they execute their roles. The pass rushing formula is a mixture of sacks, hit and hurries versus attempts rushing the passer. Graham recorded 51 pressures on only 225 pass rush snaps, equaling out to about two pressures per every nine snaps. Despite being buried behind Pro Bowler Connor Barwin and Trent Cole on the depth chart, Graham exhibited why he’s finally deserving of such a hefty pay raise, posting 5 and a half sacks and tying for second in the league with four forced fumbles. But does he even want to return to Philly?

With Cole still performing at a high level despite his age, and Chip Kelly spending the team’s 2014 first rounder on Marcus Smith, who’s to say Graham would want to return in a situational role when it’s clear he has starter potential? His play last season doesn’t appear to be a flash in the pan either. Over the last three seasons, he is PFF’s top-rated edge rusher per 100 snaps. Graham is reportedly seeking a four-year contract worth $30 million, and the Steelers would be silly not to direct their attention to him, as they paid a full-time starter nearly $10 million last season alone.

Standing 6-foot-2, and weighing 265, he is identically “listed” the same stature as former-Steeler LaMarr Woodley, whose weight in the latter stages of his Steelers career was probably closer to 300. Despite his promising career being derailed by nagging injuries and an inability to control his weight and conditioning habits, he was a Pro Bowl force early on.  Although it’s been noted before that Graham prefers playing with his hand in the dirt, he showed the last few seasons he’s more than capable of playing in a 3-4. It should be of particular interest to him that strictly playing in a 3-4 wouldn’t necessarily be the case, with Keith Butler giving whispers of more hybrid looks this upcoming season. At his weight, Graham can more than hold his own against the run, and the following video of him bench pressing 500 pounds for 4 reps is a sampling of his monster strength.

Interestingly enough, just last offseason, the Eagles showed  an affinity for Worilds, and the feeling was mutual before the Steelers placed the tag on him.  Perhaps this offseason the two will tango again, and a signing may come to fruition. Regardless, both Worilds and Graham both are in great positions as two of the premier defenders available this offseason. It will be interesting to see how the situation plays out, but with their dire cap space, it’s certain the Steelers won’t again break the bank for mediocre play from Worilds, unless the team truly is convinced his best play has yet to come. However, with a tag number in excess of $11 million or more, Worilds may have played his last down in the black and gold.  Graham, only 26, could be a cheaper, but more productive and disruptive solution, finally getting a chance to show what he could do with a starting role. Before any of that, there is work to do regarding the team’s cap space, beginning with an extension for #7.

“I don’t think we’ll have to do as much work to get in compliance with the cap as maybe we have previously,” Colbert said. “I think we’ll be in a manageable area.” If so, Graham should definitely be on the team’s radar, and a signing would maybe signal a first for the team since 1997-drafting a corner in round 1.