Notes from an eventful Day Two at the 2015 NFL Scouting Combine. Lot to go over with three positions working so let’s jump into it.

– Jameis Winston had a good day throwing the ball. Comfortable from under center coming out of a pro style system at Florida State. Zip on his throws, in part due to a wide, powerful base.

– Marcus Mariota may have been a little slow exploding away from the ball but that’s understandable for a player who hasn’t had to rep it very much. Carriage was great. Quick, compact release, up over his ear and getting his elbow extended.

– Baylor’s Bryce Petty has a live arm. And that’s an understatement. Ball explodes out of his hand. He’s a guy capable of making any throw from any position. Won’t have an issue throwing from the far hash.

– Ditto with Sean Mannion, hailing out of Oregon State. Big arm. But I would like to see his lower half be more compact. Some people don’t mind a back foot that swings out wide. Bothers me though and there might be an affect with his weight transfer. And generally speaking, I want a QB to be compact when he has to deal with a muddy pocket.

– Nick Marshall looked slow in his drop and his arm angle is a bit sideways. He worked out as a DB at the end of his drills.

– Prairie View A&M’s Jerry Lovelocke looks the part of 6’4/4 248 but has some mechanical problems. Doesn’t drive off his front foot like he should. Throwing of his toe and doesn’t have a good base. Too tall as he drives the football, causing it to wobble.

– Anthony Boone out of Duke showed some explosion on his drop. He’ll be battling the height stigma, standing in at 6’0/2.

– Shane Carden was ultra-productive at East Carolina but seeing some tape, had an elongated release. Appears to have cleaned it up a bit for the Combine. Will check the tape and compare.

– One of my favorite prospects in this year’s draft, David Cobb, pulled up lame with what seemed left a left quad injury during his first 40. Did not return the rest of the day. Disappointing. He did jump 38.5 inches in the vertical, giving us a glimpse of the pop he shows on tape.

– South Carolina’s Mike Davis sure is interesting. Lot of muscle and big thighs. 1.58 ten yard split highlights his explosiveness even if he may not have the second gear.

– Former Auburn back turned Louisville backup Michael Dyer also has nice muscle. He needed to keep his legs high running over the bags, flipping one over on the off tackle drill.

Thought he was also slow to the cone in some of the agility drills. Want to see those guys fast to get a true measure of their change of directions skills.

Catching the ball, he showed some natural hands and ability to pluck. But again, wanted to see him run his routes faster.

– Melvin Gordon has a ton of muscle in his upper body. Huge arms. No wonder he’s so tough to bring down.

Had a fine performance all around and liked his hands. Gets his arms extended away from his body

– Northern Iowa’s David Johnson was the only back to have two ten yard splits below 1.6. Only two other backs did it even once. 4.5 flat at 224 is a great time.

41.5 inch vertical and a 10’7” in the broad were second only to Abdullah in both areas.

As you’d expect, he showed a lot of short-area quickness.

– Didn’t think Cameron Artis-Payne was that explosive in the off tackle drill.

– Ditto for Buck Allen, who I noted didn’t consistently have that burst you’re looking for in my scouting report from weeks ago.

– On the other hand, you saw that from Nebraska’s Ameer Abdullah. Short, yet not small, he must take care of the football at the next level to succeed. 5’8 206 is what he came in at.

– LSU’s Kenny Hilliard is big and slow. Predictably struggled when asked to quickly react in drills. Late to change direction and not an explosive break. He’s 226 but times of 4.83 and 4.9 flat and below average ten yard splits make it awfully tough to hit that prerequisite speed to last in the league.

– Matt Jones had the same issue as Dyer. Kicked the back. Former Gator must show high knees.

– Terrence Magee and Thomas Rawls did well in the off tackle drill. LSU and Central Michigan, respectively.

– Missouri’s Marcus Murphy has some terrible measurables. Short, light, small hands, ran in the 4.6’s and jumped a paltry 31 inches in the vertical. No explosion. Was the second most productive back on his team in 2014, though he had nice 2013 numbers. Not really sure what he did to warrant a combine invite.

– Zach Zenner is a big guy at 229 but has quick feet and more explosion than you’d anticipate. Quick feet and didn’t see any false steps in drills. Plants and explodes. Small school kid from South Dakota State.

– TJ Yeldon did not have a good day. Just isn’t explosive. Will have a better college career than NFL. Could stand to lose some weight. Showed up 226. Something closer 215 might be better.

– Hawai’i’s Joey Ioesfa is a burly 247 pounds devoid of any long speed (5.02) but he was a bit quicker in short areas than I expected.

– Karlos Williams, the younger brother of Pittsburgh Steelers’ linebacker Vince Williams, ran a fantastic 4.48 at 230 pounds. However, he needed to be more precise in his cuts during drills. But someone we’ll be looking at closely in the coming weeks.

– Dee Hart from Colorado State lacked long speed but has some quicks. Trouble tracking the ball in the air. Just 20 career catches is a contributing factor.

– Miami (FL) back Duke Johnson is very explosive even if the 40 time of 4.54 won’t blow anyone away. Quick feet and a strong lower half.

– Dezmin Lewis of Central Arkansas showed the ability to track the ball over his shoulder. Nice build at 6’4 with nearly ten inch hands. Didn’t jump particularly well though.

– Another small school kid, Donatella Luckett from D2 Harding, made a nice basket catch in the vertical drill.

– Same thing for Michigan State’s Tony Lippett. Plucked one over his shoulder. Came in at 6’2/4 192. Like Marshall, worked out as a DB following his receiver workout.

Caught the ball well and showed the ability to track the ball while getting his arms extended away from his body.

– Been a big fan of Tyler Lockett from Kansas State and the Combine only cemented that. 40 times of 4.4 and 4.41. Perfect in the gauntlet. Adjusted to a high passes, stayed focused, and went 5/5 his first time through. Ditto for his second run through and he showed the ability to adjust to poorly thrown balls.

– Tre McBride from Mike Tomlin’s alma mater, William & Mary, is well put-together with nice triangle numbers, also running in the low 4.4’s. But he didn’t perform well in the gauntlet. Started it off by turning the wrong way, dropped a pass running down the line, and was all over the field. Couldn’t run in a straight line.

Did better his second time, making one nice adjustment but also suffered another drop.

– Stanford’s Ty Montgomery had a poor day by most accounts. Has bulk with big hands and an impressive vertical of 40.5 inches but timed in the mid to late 4.5’s and had two drops in the gauntlet.

– UAB’s JJ Nelson reminds me of another former player with the same name – JJ Moses. Nelson makes Dri Archer look big, weighing in a 156 pounds. He blew everyone away with an official 4.28 40 and was very impressive in the gauntlet. Was a perfect 5/5 both times through. Natural hands catcher.

– You can just tell Devante Parker has big, strong hands. Ball pops on contact when he makes a grab. 4.45 and 4.5 flat for a 209 pound frame is nice. Long arms, too. 36.5 vert and 10’5” in the broad. Great day all around. Do wish he went through the gauntlet faster. Little slow, lackadaisical. Want to see these guys move fast through the drill.

– Easy to fall in love with Georgia Tech’s Darren Waller’s triangle numbers. 6’6/1 238 and turned in a sub 4.5 40. 37 inch vertical with 33 1/4 arms. And he’s someone worth checking out. He is obviously capable of getting his arms extended away from his body but did suffer a couple drops.

– Alabama’s Christion Jones was a body catcher in the gauntlet.

– Georgia’s Chris Conley had a monster day via the tests (4.35 40, 45 inch vertical) but the drills weren’t remotely as successful. Had drops in the gauntlet, letting the ball clang off his hands. Two of them the first time through. 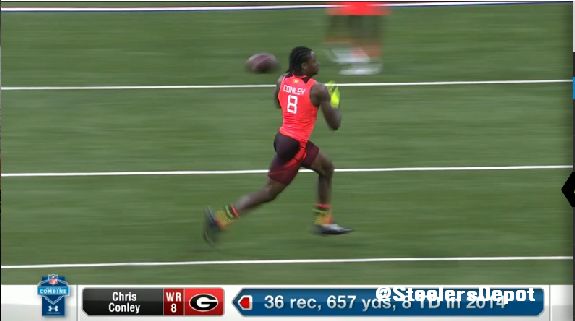 Still, he’ll have scouts running back to the film room to watch him again.

– Ditto with Sammie Coates. The Auburn product sure looks the part with a ton of muscle and long, 33 3/8 arms, but he struggled with consistently catching the football. It’s his biggest concern. He did, however, flash his length and athleticism, making a diving catch on an out route. 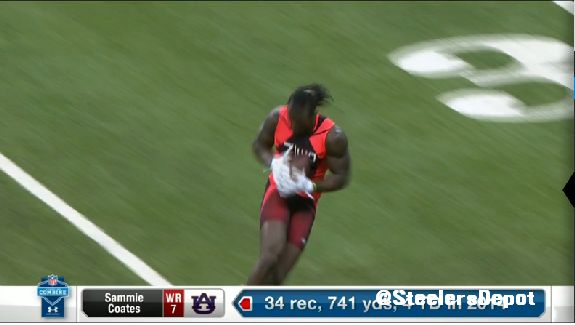 Triangle numbers are rock solid. 6’1 to go along with a 41 inch vertical.

– WVU’s Mario Alford is obviously the less impressive of the two Mountaineers. Body catcher, unlike White. Showed it in both gauntlet drills.

– Little known prospect but UConn’s Geremy Davis was successful in the gauntlet. Seemed to making a real, conscious effort to catch the ball away from his body and he was successful. 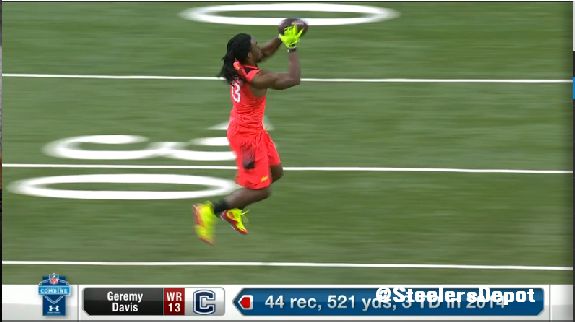 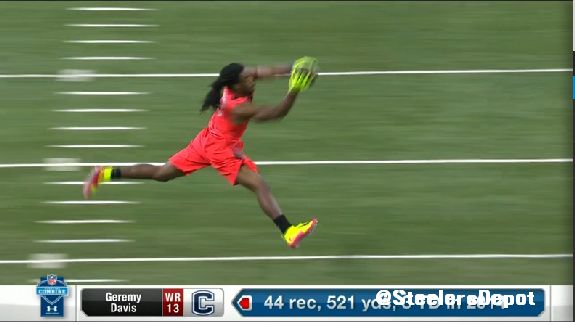 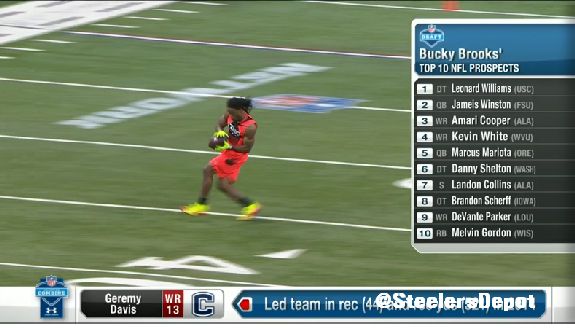 But didn’t translate as well to the actual relevant drills. Didn’t see explosion out of his breaks you’re looking

– Rashad Greene of FSU had one drop and let another ball into his chest during the gauntlet. Body caught some in drills, too. Short arms, 31 5/8, meaning passes get into his chest too often.

– Duke’s Jamison Crowder made up for a bad first run through it with a much better second test. Ran it fast, too, which is what you’re looking for as a scout. Anyone can jog down a line and catch a few passes. Defeats the purpose of the drill. Measures hand/eye coordination, ability to react in an instant.

– Devin Funchess from Michigan was terrible in nearly all the drills. Drop after drop. Concerning and one of those guys who sticks out enough that you know you have to hit the tape and figure him out. Drop in the gauntlet, once while running a dig, and again while running an out. A strong vertical (38.5) isn’t enough to even it out.

– Baylor’s Antwan Goodley played fast and showed the ability to make difficult catches over his head.

– Da’Ron Brown showed soft hands in the gauntlet but those went away once he had to couple that with running routes. Hailing from Northern Illinois, he came in at just over six feet and weighing 205 pounds. Jumped 37 inches in the vertical.

Pictures of him extending his hands in the gauntlet below. 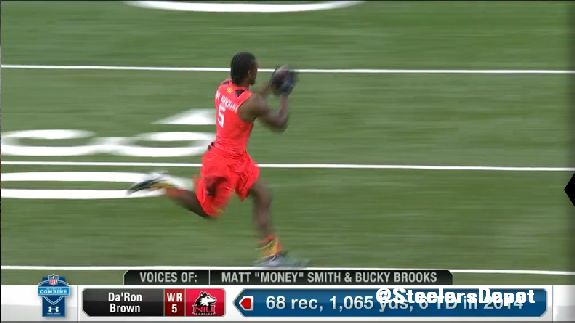 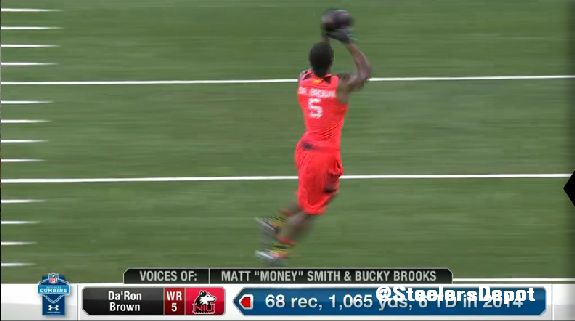 – Maryland’s Stefan Diggs didn’t have a good day. Timed well, running in the high 4.4’s but a sloppy route runner who broke his dig too early. Was actually asked to run it over.

– Justin Hardy of Eastern Carolina may have had the catch of the day, using all of his 36.5 inch vertical and extending his hands high above his head to bring one ball in. Looked to play bigger than his 5’10 frame.

– Thought Davaris Daniels was too slow running his nine route. Want to see explosion, acting like it’s the Super Bowl. Be aggressive, attack the football. Notre Dame product was too lethargic. Also looked stiff coming out of his breaks on the intermediate routes.