Notes on the defensive backs from the final day of the 2015 NFL Combine.

– In general, the first group of DBs struggled to catch the ball, let alone high point and pluck it. They all did better in the gauntlet.

– Like Alex Carter’s size. Big, strong looking lower half. Turned that lower body strength into explosion with a 40 inch vertical.

– Justin Coleman is projected as a Day Three prospect but like some others, I’m growing on him. Quick feet and a turn to match. Plants and really explodes out of his turn.

Was a perfect 5/5 in the gauntlet and played fast doing it.

– Jalen Collins is as I saw on tape. Played slow and tall in his turn.

Showed soft hands his first time through the gauntlet. Complete opposite the second time through, dropping three consecutive passes.

– Michigan State’s Kurtis Drummond was high-hipped but that’s expected for a safety. Not who the drill was meant for, as we’ll highlight throughout the day.

– In some of the early drills, Louisville corner Charles Gaines was too tall. Bad sign for a guy who doesn’t even eclipse the 5’10 barrier.

– In the first turn drill, Virginia Tech safety Kyshoen Jarrett was explosive out of his turn. Was impressed.

Suffered three drops in his two times in the gauntlet.

– Tiny corner Senquez Golson is explosive in his turn, as you’d hope for in a corner weighing less than 180 pounds. But I didn’t always see the downhill click and close I was expecting.

– Problem with the taller corners is their difficulty staying low in their pedal and turning. 6’1/4 LaDarius Gunter has that issue. Very tall with a slow turn. Lacks length for his height and explosion, 33 vertical and nine feet even in the broad. Latter was the worse of his group and to put it in perspective, thirteen offensive lineman jumped higher. Agility numbers weren’t inspiring either.

Hands didn’t look good in the gauntlet, either. Reason why he’s pegged as a late round guy.

– He’s gotten some love on here but I didn’t walk away too impressed with Western Michigan CB Donald Celiscar. Slow, deliberate, and didn’t look natural in his turn.

Compounded that by body catching and dropping passes in drills.

– Mississippi State corner Justin Cox screwed up one drill twice, flipping the wrong way. He was great in a straight line, turning in a 4.36, but struggled once he had to change directions.

Fast and smooth during the gauntlet. Natural hands catcher.

– Oregon’s Tony Hill does a nice job of getting low in his pedal. But he had two drops in the gauntlet the first time through. Much better the second time around, making difficult grabs away from his body.

– I wrote in my report UCF’s Jacoby Glenn that he played way too tall in his pedal. He’s showing better bend but that’s causing his hips to tighten up. But as a young corner without a lot of experience, just two years, he can be repped and coached up.

– As you’d expect after hauling in seven interceptions, he has natural hands. Plucks the ball away from his body, though I wish he would have run faster. 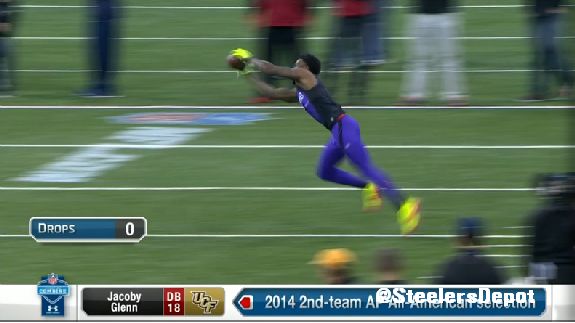 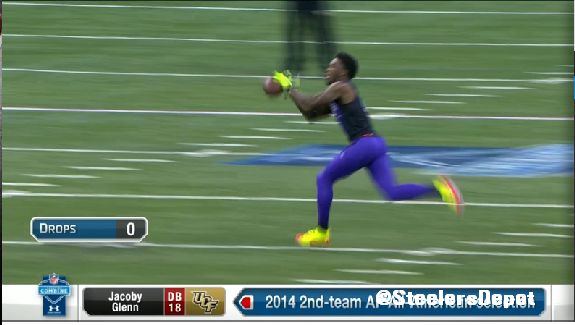 – For the first time throughout this entire draft process, I felt a little low on Miami (OH) corner Quinten Rollins. More tight-hipped than I thought, moved slower.

– Ditto with Damien Swann out of Georgia. Low initially but popped up as he turned. Another taller guy at six foot even. 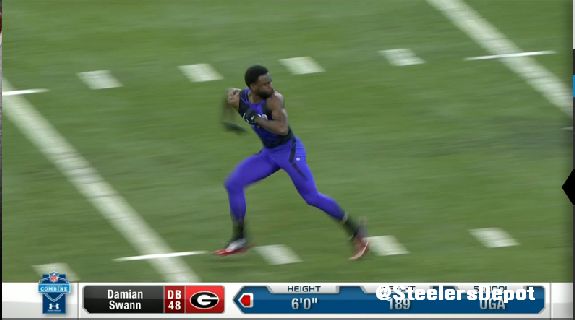 – He played out of control but free safety Jermaine Whitehead looked explosive in his flip. And that was important to see. I don’t get too caught up in his pedal because it isn’t for him. He’s not a corner. But that explosion will be valuable in anything he does.

But to point it out, this is what it looks like when a safety tries to backpedal.

Does know how to get up and grab the football, as you’ll see below. 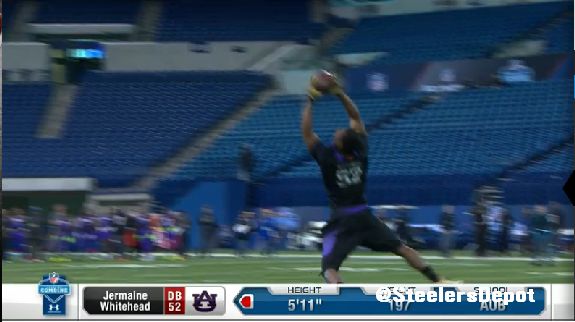 – Opposite story for Florida Atlantic’s D’Joun Smith. Low in pedal and in control but tight-hipped coming out.

– Florida State’s Ronald Darby, who ran a blazing 4.38 and jumped 41.5 inches in the vertical, caught the ball cleanly his first time through.

– Lorenzo Doss is a short-armed corner out of Tulane but also caught the ball well.

– Off the little bit of tape I’ve seen and based off of Indianapolis, Central Florida strong safety Clayton Geathers. Compact, hard-hitter with soft hands.

– I was certain he was a safety when I saw it the first time but Oklahoma’s Julian Wilson is a corner. As tall and stiff as they come in his turn. Picture and GIF below. 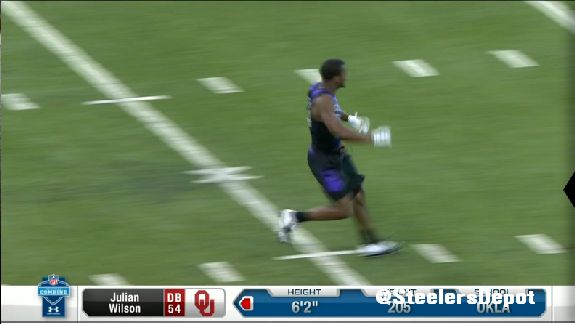 – Texas State’s Craig Mager is a kid who interests me. Good enough size to play at the next level, 5’11/4 201, though he’s short-armed, and turned in a 4.44 40. Low in his stance and very explosive out of his pedal. This is what a good drill looks like.

– Eastern Washington’s Tevin McDonald is a small-school favorite of same. Another guy that is fluid and explosive for a safety.

– Washington’s Marcus Peters is a little tall, as expected, but there’s no hitch in his turn. Like him high-pointing the football at the end of this drill. What you want them to do.

– Like what PJ Williams did here. He didn’t post his very best numbers, tested better in training than at Indy, but knows how to elevate and find the football. 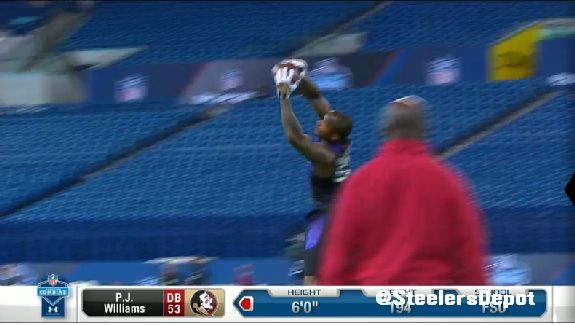 – Cody Prewitt jumped but then counter-productively didn’t extend his hands. Tries to basket catch and drops the ball. 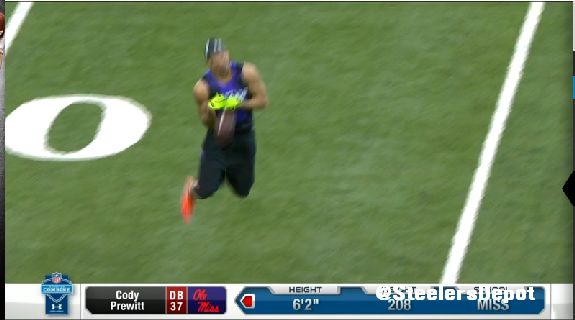