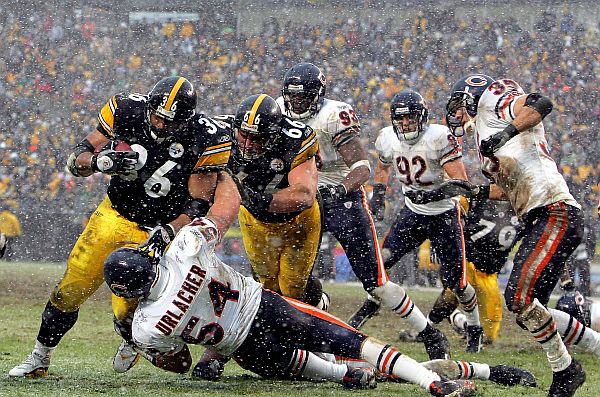 Former Pittsburgh Steelers running back Jerome Bettis retired following the 2004-2005 season, upon the conclusion of which the team capped off an improbable playoff run to earn “one for the thumb”, sending the veteran back home in Detroit as a champion.

He retired as the fifth-leading rusher in the history of the game, amassing 13,662 yards between 1993 and 2005, and remains the only running back in the top 10 all-time rushers eligible for the Hall of Fame who has yet to be selected for such an honor.

Bettis became eligible for the 2011 Hall of Fame class, but he faced the problem of having retired at the same time as two of the other running backs in that top 10 list, namely Curtis Martin and Marshall Faulk. Rarely does the Hall elect multiple players from the same position to be part of the same class.

Faulk got the nod first- becoming the first-ballot Hall of Famer of the group. Martin was next in 2012. 2013 came, and…there were no running backs. The same thing happened in 2014.

Bettis is now in his fifth year of eligibility, and is one again among the 15 finalists for the next class to be enshrined, which includes such first-year eligible as Kurt Warner, Junior Seau, and Orlando Pace. Marvin Harrison, in his second year of eligibility, was put aside in favor of the patient Andre Reed, who retired in 2000, and figures to have a strong chance of making it this time.

Bettis must contend with Terrell Davis as the other running back among the finalists. Unlike Bettis, whose career was largely defined by sustained and consistent performance, Davis is primarily known for a brief period of excellence, even dominance, which includes one of the few 2000-yard seasons in league history.

It seems as though Bettis will continue to face a tough road ahead of him as he waits patiently for his invitation to Canton. But some of those who are already in the Hall are embracing him already as one of their own.

Linebacker Derrick Brooks, part of the Hall of Fame Class of 2014, and defensive end Chris Doleman, enshrined in 2012, both spoke recently about Bettis and his Hall of Fame credentials, insisting that he is deserving of entry into the exclusive club.

Brooks went up against Bettis on an occasion or two, and acknowledged that he was on the losing end on a number of collisions. He praised his endurance and his ability to grind down defenses in the fourth quarter, for which he was known as The Closer.

As for Doleman, he admired Bettis’ variety of assets, including size, quickness, and elusiveness, which is a rare trifecta. Doleman believes that he was one of the rare players who could have played in any era of the game because of that.

The selection committee will convene on Saturday, and we will find out that night whether or not The Bus will finally stop in Canton.