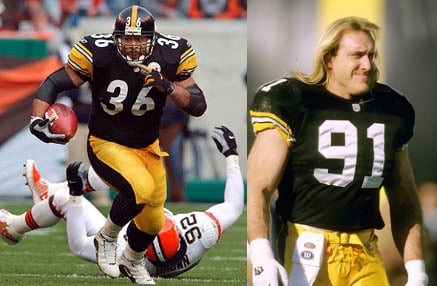 Former Pittsburgh Steelers running back Jerome Bettis and linebacker Kevin Greene were among the 15 modern era finalists announced on Thursday evening for the Pro Football Hall of Fame class of 2015.

This will make the fifth straight year that Bettis has made it to the final 15. The Notre Dame product rushed for 10,571 yards with the Steelers and registered 13,662 career yards. He was voted to the Pro Bowl six times and ended his career with a championship in Super Bowl XL in his hometown of Detroit, Michigan.

Greene has been a finalist the last three years and a semifinalists several times. He played 15 seasons in the NFL, and in his three seasons with the Steelers he had 35.5 sacks and two Pro Bowl selections. Greene finished his career with 160 sacks, 26 fumble recoveries and five interceptions.

The class of 2015 will be announced Jan. 31 in Phoenix during “NFL Honors.” Inductions will take place in August in Canton, Ohio.