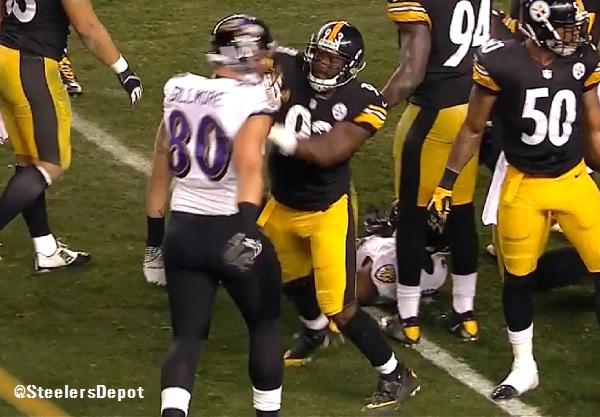 The Pittsburgh Steelers have been going through defensive struggles since losing to the Denver Broncos in the wild card round of the playoffs in 2011. Secondary play has been abysmal at times. Tackling was poor in 2013 and portions of 2014. Inexcusable penalties gave opponents far better field position. And the explosive plays… my God the explosive plays this defense has allowed. The inability to create turnovers has hampered this team and not allowed them to score easy points off of turnovers.

Where do these issues stem from? Primarily most of these problems, outside of tackling, stems from a lack of consistent pressure or pass rush. This used to be the bread and butter of the Steelers defense but it has now become an Achilles heel. As the Baltimore Ravens showed in their victory against the Steelers last week, a consistent pass rush covers up a lot of warts. By getting after the quarterback, the secondary has a much easier time covering and making plays. Quarterbacks press and make bad throws. Without consistently getting to the passer you can be picked apart by the likes of Joe Flacco.

When outside linebacker Jason Worilds was drafted in 2010 he was seen as the heir apparent to an aging James Harrison and would man the right outside linebacker spot while LaMarr Woodley wrecked shop on the left side. Fast forward five years, Woodley was cut by the Steelers because he couldn’t stay healthy, a 36-year-old Harrison is the best pass rusher on the defense, and Worilds is just a guy.

Worilds is built like a typical Steelers linebacker. He’s 6’2″ and about 260 lbs. He learned from two of the better linebackers in the league in recent years. The problem is his production has never matched his potential. His high water mark for sacks was eight last year and it was enough to get him an almost $10 million transition tag pay day.

With a $10 million salary and an equal cap hit Worilds had 7.5 sacks, one interception, and one forced fumble. That’s over a million dollars per impact play.

That is just not enough production for that price tag. That’s not enough production for a guy making even $4 million less than that. He had stretches of three and five games without any sacks. Dave Bryan did a great job earlier this week breaking down each one of Worilds’ sacks this season. Only twice did he beat a tackle and both players (Eric Winston and Ryan Harris) could hardly be considered world beaters.

Sacks are one of the flashier defensive stats but they’re not the only component to an effective, consistent pass rush. However, according to Pro Football Focus, including his sacks, Worilds only applied pressure on the passer on approximately 9.4% of his pass rushing snaps. Regardless of the amount of times Worilds has had to drop into coverage that number is simply unacceptable for a player who is supposed to be the team’s premier pass rusher and is paid as such.

I’m going to be the contrarian here and say the team should not re-sign Worilds. Let another team overpay for him. If the Steelers were to re-sign him they realistically will be looking at a four to five year deal with an average yearly salary of probably $6-6.5 million and probably upwards of $10 million guaranteed. That is too big of a contract for a player that really isn’t much of a difference maker. I think in terms of production he is actually only worth $3.5 million a year. There is virtually no chance he takes a deal like that. If the Steelers pay anything more than $4.5 million a year they are overpaying.

After five years in Dick LeBeau’s defense we know what Worilds is and we know what he isn’t. He is an average starting outside linebacker. He is not the playmaker that James Harrison and LaMarr Woodley were. Worilds has previously said his lack of production is somewhat linked to how much he has to drop into coverage. Woodley played the same role opposite Harrison and produced at a much higher level. If the team pays him big dollars they are conceding that they like the pass rush they have, as Jarvis Jones will be the starting right outside linebacker next year. If you’re ok with what you have you might as well see if you can get Harrison to come back for $2-3 million dollars, save yourself from long term cap damage and draft an edge rusher high.

So what to do the Steelers do if they let Worilds walk in free agency? There are a number of options to consider. Re-signing the underrated Arthur Moats, luring back Harrison with a solid one year offer, and drafting an edge rusher high is one option. Another option is spending money that would’ve been spent on Worilds on an outside free agent. Alex Kozora recently came up with an excellent free agents wish list that makes a lot of sense. There is no chance the Steelers are going to be able to afford the league’s sack leader Justin Houston. However, free agents Jabaal Sheard and Pernell McPhee might be options the Steelers can afford with some cap magic by Omar Khan. Although their production is similar, McPhee has done so much more with so much less in terms of playing time. According to PFF, McPhee failed to record multiple pressures in just one game this season with far less snaps than Worilds.

The Steelers cannot afford to re-sign Worilds only to get several more years of mediocre or slightly above average play from such a crucial position. The time is now to cut bait and infuse a new face or some youth to light a fire under this lackluster pass rush.