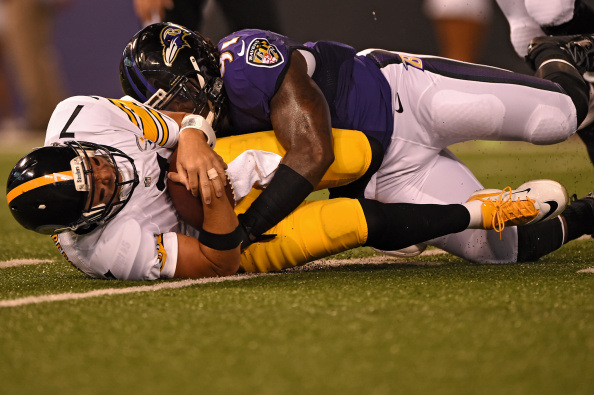 With Pittsburgh Steelers quarterback Ben Roethlisberger not sacked for the third time in 2014, there isn’t a sack breakdown to walk through against the Cincinnati Bengals. But since this is the end of the regular season, we’ll take one last look at it and attack it in a couple different ways.

The raw sack breakdown numbers of the 2014 season.

– Although he’s a center, for Maurkice Pouncey to give up just half a sack in an entire season is pretty remarkable. He helped hold in check great defensive tackles like: Gerald McCoy, Jurrell Casey, Haloti Ngata, Geno Atkins, and Dontari Poe.

– Their job is a bit easier but overall, the interior lineman’s numbers are rock solid. No guard giving up more than 3.5.

– There may have been times where I could have – perhaps should have – been harsher on Roethlisberger, but the 2.5 mark stat is fantastic given his style of play. And this is a player who set a career high in attempts.

We’ll break it down from a slightly different point of view. A “per snap” basis in an attempt to make the numbers relative. Obviously, a player with more snaps is at risk for giving up more sacks.

The Steelers had 651 total pass plays. That’s adding attempts with sacks and scrambles.

We’ll use just the lineman and quarterback for this one.

Maurkice Pouncey:  One sack allowed every 1302 snaps
David DeCastro: Every 260
Ben Roethlisberger: Every 260
Ramon Foster: Every 164
Mike Adams: Every 112
Kelvin Beachum: Every 109 snaps
Marcus Gilbert: Every 87
Cody Wallace: Every 71

– Although Beachum allowed more sacks, his per-snap basis was better than Marcus Gilbert’s, making Gilbert the worst of the starting five. The right tackle allowed five sacks over 434 opportunities. Beachum, six in 651.

For the returning players, a comparison to last year. The 2014 total on the left and 2013 on the right.

– David DeCastro and Roethlisberger had the biggest improvements, their sack total decreasing by two.

– Of the starting five, only Foster saw an increase, a miniscule half sack. Overall, no one jumped by more than one. A great sign and one you’d expect in one of Roethlisberger’s least sacked seasons.

To finish off the sack portion, a week-by-week breakdown of who was responsible.

– Over the last eight weeks, Beachum gave up just 1.5 sacks.

– Two of DeCastro’s sacks came in the same game, against the Tennessee Titans’ exotic defense in Week 11. Other than that, he allowed a half sack in the 15 other games.

– Outside of a bad showing in Week Seven, Ramon Foster never allowed a full sack in a game.

– Roethlisberger was sacked just three times after the bye week.

We’ll conclude with a penalty counter from this season. And like above, compare it to last year.

– An increase in flags, a large chunk of those coming early in the season. It’s worth noting Some of those players logged significantly more snaps, naturally leading to more penalties.. Beachum had nearly 300 more snaps in 2014 than 2013.