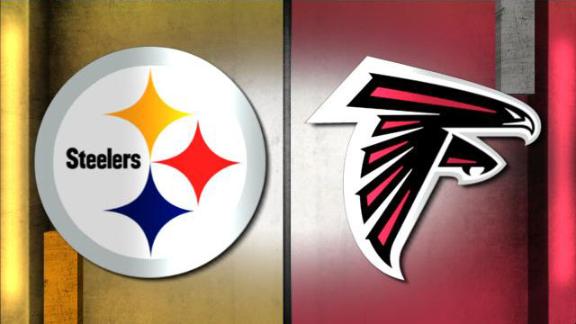 Statistical analysis of the Pittsburgh Steelers 27-20 victory over the Atlanta Falcons.

– We have to start with all the records that were set. And there were a lot.

– Surpassing 2000 yards makes Bell just the 8th player in league history to achieve that within his first two years. Other notables on the list include: Eric Dickerson, Edgerrin James, and LaDainian Tomlinson.

– If you consider Ray Matthews to be a running back, Bell broke the team record for most receiving yards in a season by one. Bell now has 765. Matthews’ record had stood since 1955.

– Bell is on pace for 2335 yards from scrimmage. That would be sixth all-time in NFL history.

– Antonio Brown set the Steelers’ franchise record for receptions in a season with 115. He is two yards shy from breaking his own receiving yards record. He’s on pace to finish with 131 catches for 1712 yards. The catches would be second in league history while the yards would rank sixth.

– Brown also set the NFL record after his ninth consecutive game with at least seven catches. He came into Sunday tied with Demaryius Thomas with eight. Now the record is all his.

– He surpassed 5000 yards receiving in just his 68th game. He’s the seventh player in team history to reach the 5000 plateau.

– And as the broadcast noted, yesterday makes 30 straight games with at least five catches for 50 yards for AB. The next closest has 19.

– Ben Roethlisberger rebroke his and the franchise record for passing yards in a season with 4415. He is on pace to finish with 5045, placing him 9th all-time.

– To recap, the Steelers could finish the season with the 9th best passer, a top ten receiver in catches and yards, and the 6th best performance by a running back in league history. Not a bad trio.

– Bell is still second on the team in receptions and yards. Odds are, he’ll finish the season that way. Making him the first Steelers’ back to be first or second in both categories since Merril Hoge in 1988.

– William Gay and Antwon Blake tied for the team lead in tackles today with eight. First time two defensive backs have done that since Week 1 of this year.

– As you may have already seen, Gay is the first Steeler in history to record three pick-six’s in the same season. He’s the 23rd player in league history since the merger to achieve that and the first since Janoris Jenkins in 2012.

– Gay is the first Steelers’ CB to record three interceptions in a year since Ike Taylor in 2007.

– Big Ben has been sacked just twice over his last three games. That’s the lowest total over a three-game span since Weeks 11-13 of last year.

– Bell is on pace for 386 touches in 2014. He has yet to fumble. That would make for the second most touches without a fumble in league history. Only Gerald Riggs, who received an absurd 430 touches in 1985, would have him beat.

– In the last two seasons, the Steelers have allowed eight receivers to amass 130 yards in a single game. Harry Douglas being the latest. From 2005 to 2012, they only gave up eight. You’d have to go back to the 1998-1999 seasons for the last time it’s happened that much over such a short span.

– The Steelers’ kick return game continues to struggle. The team’s longest return in 2014 is 42 yards. If that number holds, it’d be the shortest in a season since 1992. That year, the long was 32.