After making starts at defensive end for the Pittsburgh Steelers in each of the last two games, rookie second-round draft pick Stephon Tuitt has finally been officially installed as the starter on the depth chart.

The Notre Dame product has played over 50 snaps in each of the Steelers last two games during which he recorded five total tackles and a crunching hit on Cincinnati Bengals quarterback Andy Dalton.

With Tuitt seeing so much playing time now, it’s resulted in veteran defensive lineman Cam Thomas seeing his time on the field decrease. Thomas, who was signed two a two-year contract as an unrestricted free agent during the offseason, has played less than 25 snaps total in the last two games.

Tuitt now figures top be a permanent fixture on the Steelers defensive line for many, many years to come.

In other changes to the depth chart, Antwon Blake is now listed behind William Gay at left cornerback, with Ike Taylor and Brice McCain, in that order, listed at the right cornerback position. Additionally, Darrius Heyward-Bey is now listed as the back-up to Antonio Brown, with Justin Brown behind him. Lance Moore is listed behind Markus Wheaton for the team’s other starting wide receiver position and rookie Martavis Bryant is behind Moore. 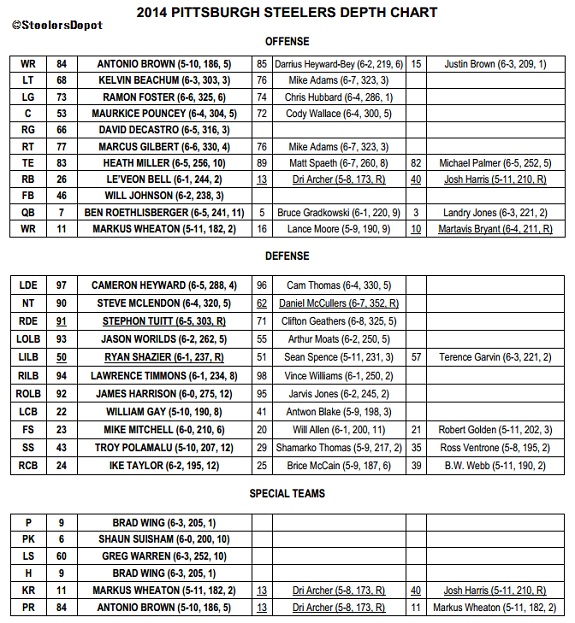