There’s no contesting the fact that the Pittsburgh Steelers’ offense has benefited greatly with the injection of 6’4” rookie wide receiver Martavis Bryant into the rotation over the past three weeks. The team has produced 15 touchdowns on the offensive side of the ball in that span, and five of them have gone to him.

There’s a reason we’ve been taking a look at Bryant every week since he’s been put into the lineup. He’s been producing, quite simply, and he figures to be a major part of the offensive system going forward.

What we’ve also taken a look at are some examples of the obvious room for growth that is still evident in his game, which is certainly not something that has come as a surprise. He was inactive for the first six games for a reason, and it wasn’t just because of a late preseason shoulder injury.

He continues to learn on the fly, but it’s undeniable that the overall results have been favorable. And while he may not score a pair of touchdowns in every game he plays, he should become a more consistent and dynamic player as he grows into a better understanding of the position. Spending his free time with Antonio Brown shouldn’t hurt. 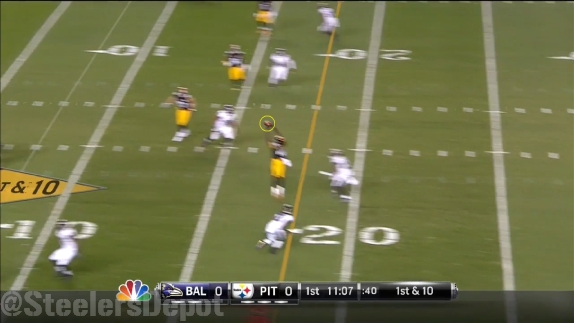 Quarterback Ben Roethlisberger has obviously taken a vested interest in getting Bryant involved in the offense, so it’s no surprise that his first pass of the last game against the Baltimore Ravens went to the rookie.

According to Pro Football Focus, Bryant has run 56 routes during his three games active so far, and has been targeted 17 times, meaning he is targeted nearly a third of the time that he makes himself available in the passing game.

It didn’t quite work out on this occasion, as Roethlisberger’s pass was high, and Bryant wasn’t ready to go up for it. As you can see in this unfortunately unavoidably blurry screen cap, however, it was a catchable ball that many will likely consider a drop, despite the high pass.

Of course, touchdowns tend to make up for drops, and he delivered his first of the game late in the second half from 19 yards out. Despite the fact that they lined up in 12 personnel, the Steelers sent all eligible receivers, with Bryant in the left slot inside the two tight ends.

With Heath Miller curling toward the middle of the field and Matt Spaeth making a five-yard turn, the Ravens defense was drawn up, while Bryant beat the safety in a foot race to the left pylon for the wide open touchdown. 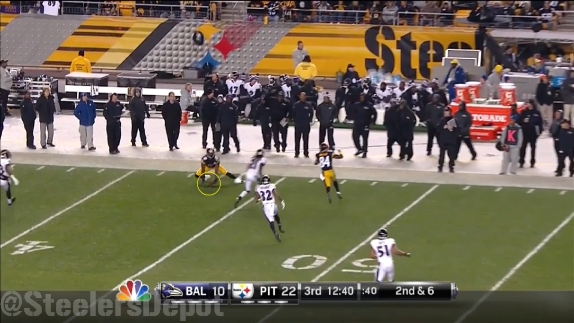 One thing that Bryant is going to have to adapt to playing with Roethlisberger is learning when to come back to the ball. Such an incident arose early in the third quarter in which the quarterback unleashed a pump fake to shake the safety and open Bryant at the right sideline. Roethlisberger threw it to Bryant, but he didn’t get enough on the pass. Instead of coming up for the ball, Bryant squatted down and hoped to pick the ball off the grass.

Of course, he went on to make up for that one as well, adding another long red zone touchdown to his resume in the fourth quarter. Facing third and nine, the Steelers sent four receivers, including Le’Veon Bell, with Bryant on the far left and Markus Wheaton inside of him. With Wheaton chasing past the second level, he cut right between the linebackers and safeties, which pulled the coverage away and let Bryant slip in between the two closing receivers.