I wrote earlier in the week about the fact that Pittsburgh Steelers outside linebacker Jason Worilds turned in a productive afternoon as a pass rusher on Sunday against the Jacksonville Jaguars, at least in the first half of the game.

Now it’s worth taking a look at some of the impact that he had on rookie quarterback Blake Bortles and the Jaguars’ passing game with his pass rush.

One thing that quickly becomes obvious is the fact that the Jaguars offensive line didn’t seem to respect Worilds’ abilities very much, as they often left him unblocked by the linemen—or so it seemed—expecting a running back or fullback to be able to handle him. That proved not to be the case repeatedly.

On Jacksonville’s first offensive play of the game, they lined up in a two tight end set, with one on each end of the line. Worilds and Arthur Moats both adjusted, moving out to the nine-tech to the outside shoulder of the ends.

Worilds was assigned backup tight end Nic Jacobs, who was slow to open the gate off the snap. That allowed the rusher to go wide and then force the tight end to overcompensate. Worilds eventually won to the outside—as did Moats—and the two together forced Bortles into a poor throw that was nearly intercepted. 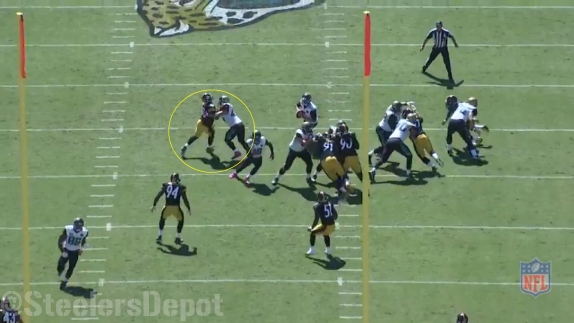 Toward the end of Jacksonville’s opening drive, Worilds was able to get to Bortles again, and this time bring him down, after the Jaguars attempted to block the outside linebacker with a fullback. As can be seen in the still above, Worilds was able to control the fullback, standing him upright from a squat position, and then worked off of him to get to the quarterback.

That opening drive ended one play after the sack, and Worilds also helped end the Jaguars’ second drive as well after making quick work of a Toby Gerhart cut block to get into the backfield. He hardly broke stride as he sidestepped the block attempt and twisted the quarterback down as he threw a high fastball that his tight end couldn’t secure.

Two series later, Worilds once again got the better of a running back, this time on third and seven against Jordan Todman. He did little more than use a straightforward bull rush to jar him out of his lane to the quarterback. After accomplishing that, he released the running back and walloped Bortles, knocking him to the ground yet again. The pass was completed short of a first down, for another punt.

Now simply experimenting with all the different ways of avoiding a cut block, Worilds played leapfrog with Todman with about a minute left to play in the first half. He sent the back through his legs like a low hurdle and then, for the fourth time of the game, brought Bortles to the ground, planting him.

Finally, a few plays later, the right tackle actually tried to block Worilds on his own. He used his hands to keep the lineman’s arms at bay, turning the corner and getting close to Bortles again as he threw inaccurately and incomplete into the end zone.

In all, I counted 15 passing plays on which Worilds was blocked by a lineman in the first half. The majority of those came on quick screen passes, rollouts, or when Worilds happened to be on an inside stunt. The right tackle rarely faced him in the first half. A running back or tight end blocked him on six other occasions, the results of which are seen above. The rest involved him dropping into coverage.