Observations from the Pittsburgh Steelers 31-10 loss against the Cleveland Browns last Sunday.

– Troy Polamalu appears to be cheating on this route, expecting a corner route. Not sure why though. Saw something on film study? It’s just odd because it’s typical for the Browns to bend their #1, as what happens here. It’s a 31 yard gain. 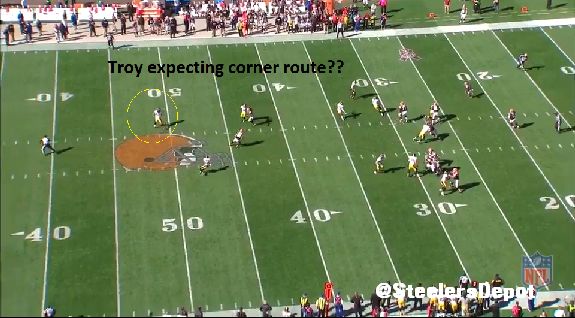 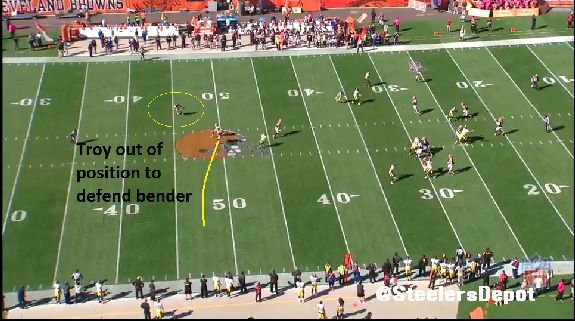 – Heath Miller needs to hold his block against the clearly smaller/weaker Barkevious Mingo. I’m telling you, Miller can still hit his angles with the best of them, but when asked to straight up base blocking, he’s lost a lot. 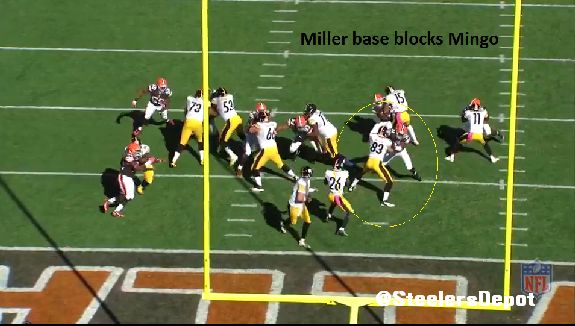 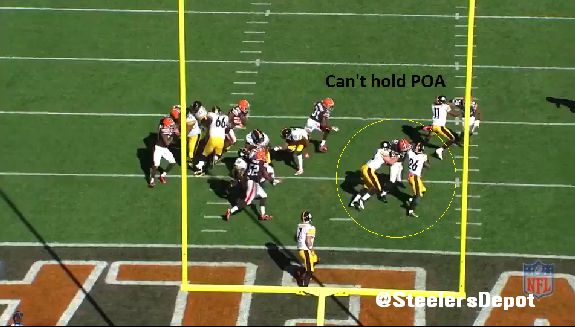 – Steelers had the same run on back-to-back plays. First one went to Bell for 12. Try it again but Marcus Gilbert lets Jabaal Sheard to win inside and he makes the tackle backside. 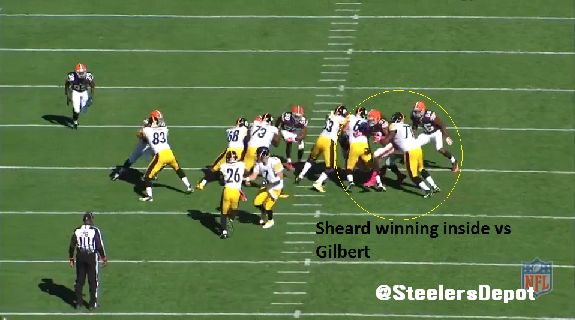 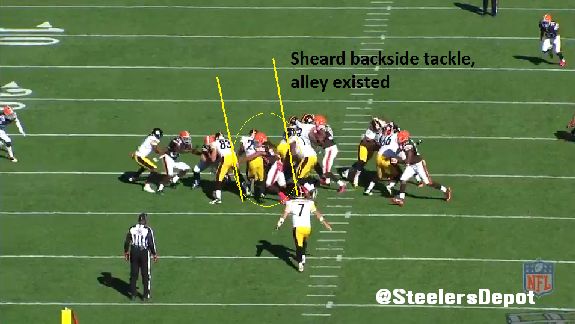 – Big lane created by the Browns. Knowing Cam Thomas is in at nose tackle, the Browns cut him. No way 96 is going to leap over. He gets stuck, slowing up Brett Keisel in the process. Just look at the alley that appears.

– Mike Mitchell with a wonderful job of separating player from ball. Clean, legal hit. Mitchell has been playing good ball the last two weeks. Don’t let the rest of the defense bring him down. 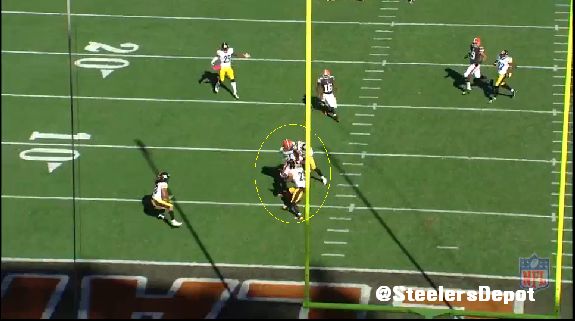 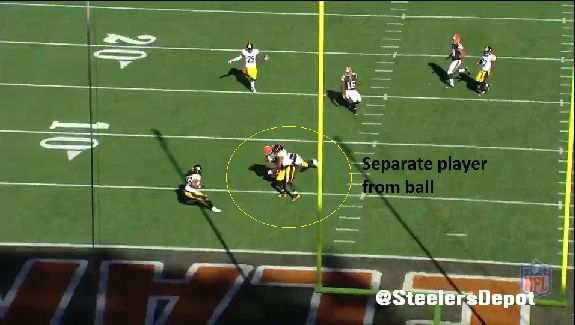 – 173 pound Dri Archer goes down easily like someone who really is 173 pounds.

– On the Lawrence Timmons big pop against Ben Tate, I calculated Lawrence Timmons running 11.5 years in three seconds. That involves him reacting to the play, working overtop the center moving to the second level, and making the hit. Impressive.

– The Steelers pitted Cortez Allen, Troy Polamalu, and Mike Mitchell against Jordan Cameron. It didn’t matter, he dominated them all.

– On Mike Mitchell’s interference against Cameron, Steelers ran a “Fire X” with Timmons and Sean Spence. They also brought Troy Polamalu up the middle, who had a free lane to the QB. 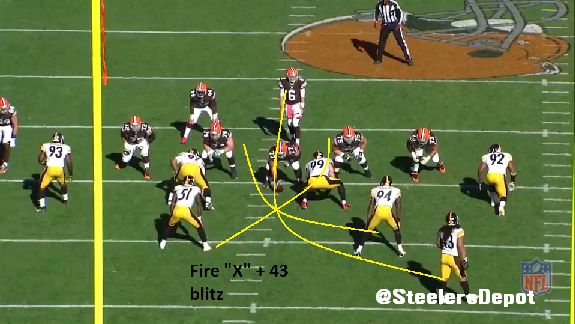 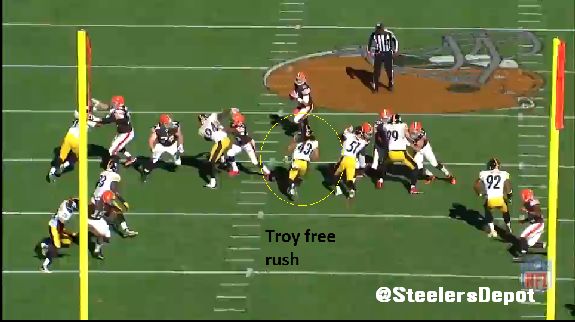 – Cam Thomas is pushed downfield here but I actually don’t assign the blame on him for this play. This one is on Brett Keisel for not filling the backside “B” gap. Joe Thomas with a strong punch who turns and seals Da Beard. Not fair to blame Thomas here. 99 needs to get down the line. 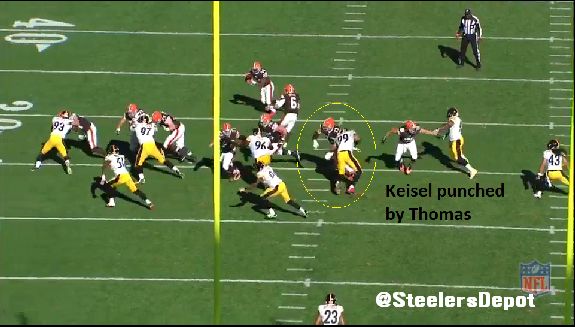 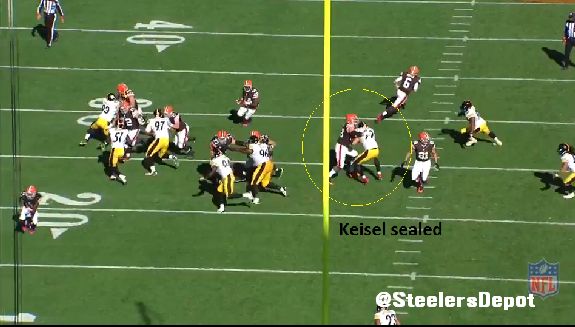 Mitchell does save the touchdown with another open field tackle, taking a perfect angle.

– Back to the ugly from 96. Time it for yourself in the GIF below. On a solo block from the center, the former Charger goes to the ground in less than a second. The back cuts to the inside of him for a decent sized gain.

– Browns running zone out of 13 personnel. Focus here are the backside blocks by the left tackle and adjacent tight end. Joe Thomas seals and the tight end cuts Arthur Moats, creating another big lane. Easier said than done, but as coaches are always quick to point out, you gotta stay on your feet. 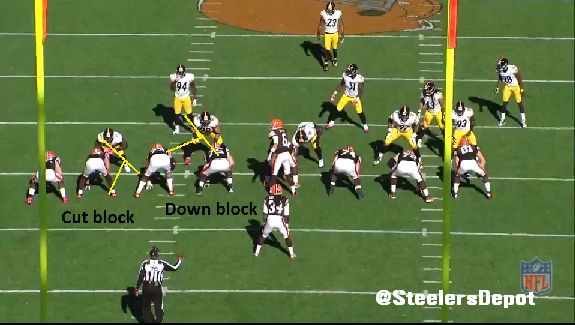 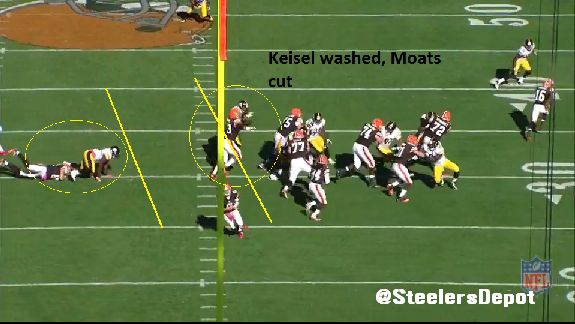 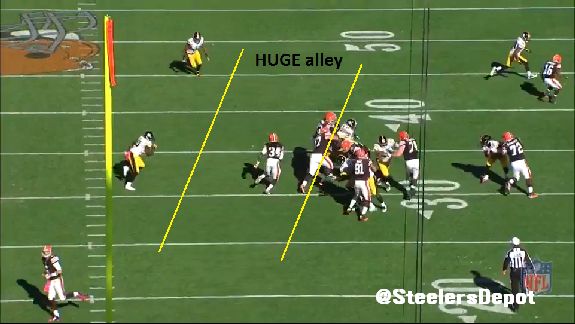 – Kudos to Antonio Brown for getting separation against Joe Haden in Cover 2 man. Cornerback is trailing. Not easy to separate.

– Markus Wheaton is wide open and Ben Roethlisberger overshoots him. Sums up the game well. 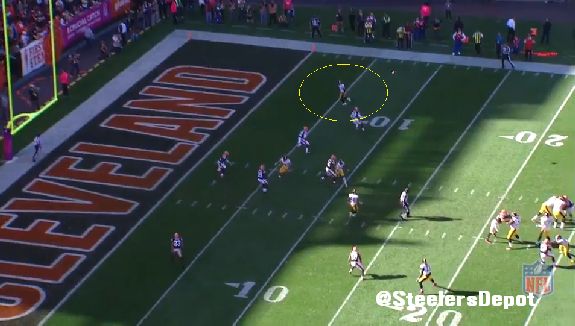 – Love the work from the left side of the line. Kelvin Beachum, Ramon Foster, and Maurkice Pouncey. The Browns loop nose tackle Ishmaa’ily Kitchen with the DE and OLB slanting. It all gets passed off well. Beachum taking the looper, Pouncey the end, and Foster the ‘backer. Crazy good chemistry there. 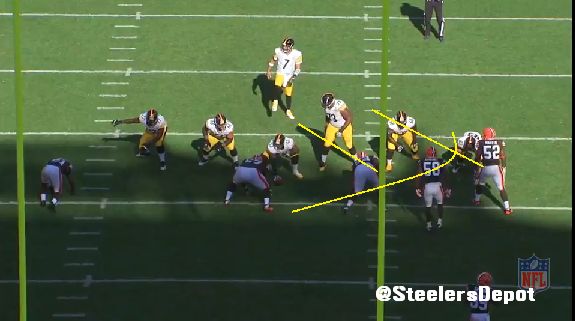 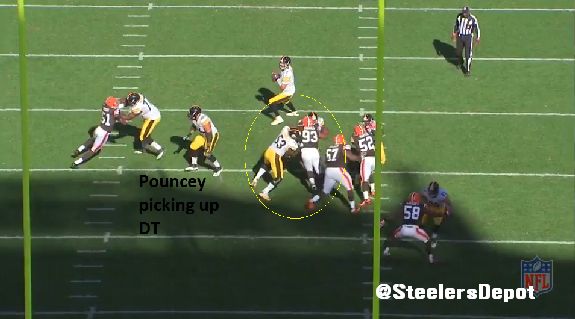 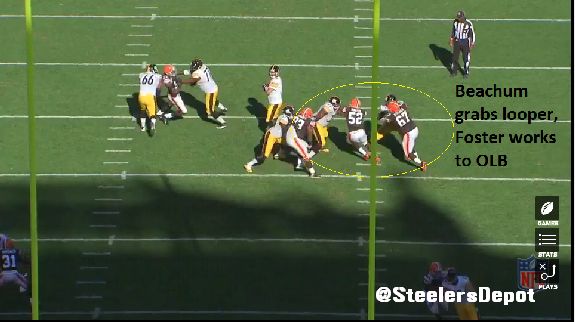 – Wheaton turned the wrong way on 4th and 10 on the goalline. Ran a curl when Ben wanted a comeback.

– For unknown reasons, Cam Thomas’ first step is upfield instead of down the line. Winds up way upfield, almost out of the frame. Guessing on a rollout? I dunno. 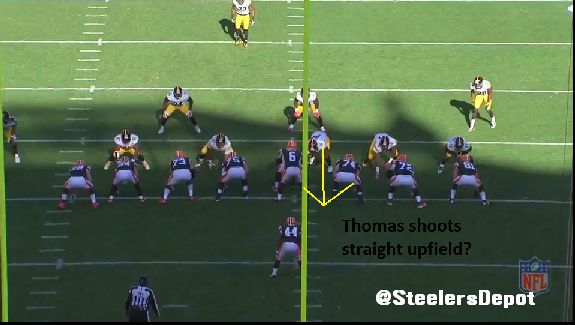 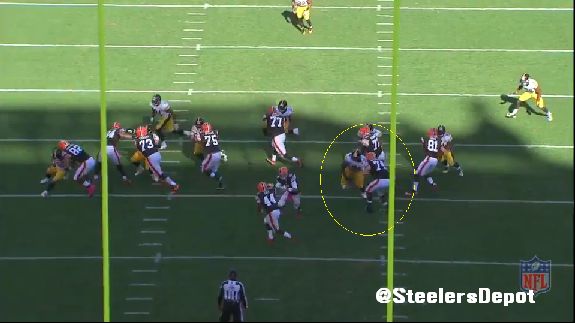 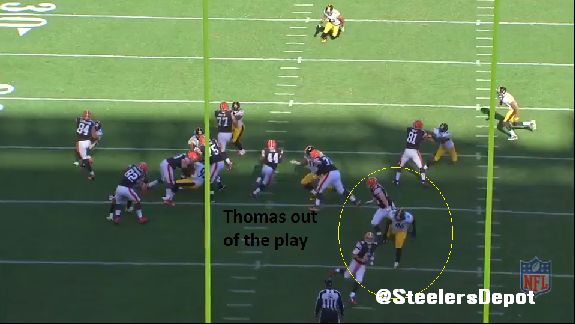 – Ugly run defense from James Harrison, something I don’t say often. Gets nudged by the TE, turned, and ends up behind the runner when he’s supposed to set the edge. 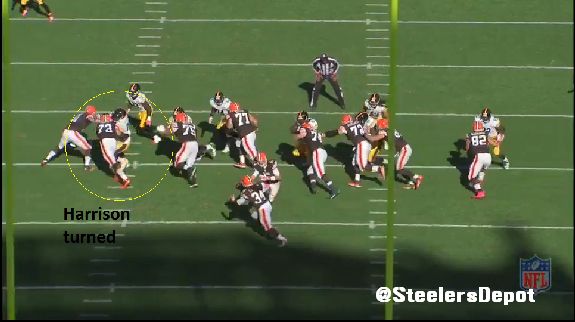 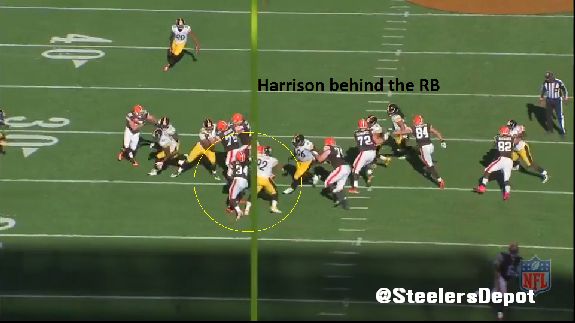 – Lance Moore with a rough game but did a good job stemming upfield on a scramble drill for his 26 yard touchdown at the end of the game.

– Quick Browns’ note. John Hughes is a heck of a player. Only given one tackle on the stat sheet but he was arguably the teams’ defensive MVP Sunday. Great two gapper. Go sign him after he’s a FA following 2015.