A brief scouting report on the Indianapolis Colts for their game against the Pittsburgh Steelers.

– The offense runs through Andrew Luck. Offensive coordinator Pep Hamilton has wisely let go of the reigns and let his best player control the offense. Averaging 43 attempts per game, Luck has thrown multiple touchdowns in all but one game through 2014.

He’s a top five QB to me. Nothing bothers him in the pocket. He’s the type of guy who could sleep through an earthquake. Bodies can fly around and he’ll calmly keep his eyes downfield, going through his reads. His eyes and feet are connected, he has the arm to make any throw, and he’s extremely mobile. He has four games of runs of 10+ yards.

Technically sound, I love his carriage of the football on the move. Most quarterbacks let the ball dangle down at the hip. Luck keeps it high and tight to his chest. Eliminates any windup when he decides to throw. 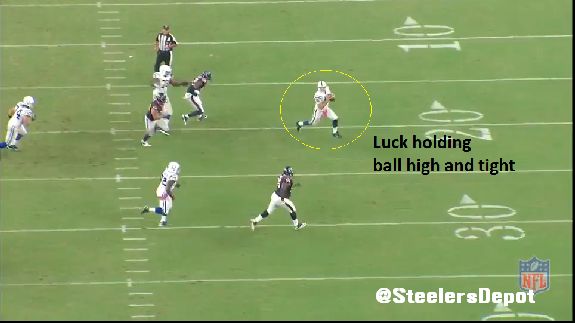 – Ahmad Bradshaw is clearly the more talented running back between him and Trent Richardson but oddly, the two are nearly equal in snaps (Richardson leading 266 to 263) and with Richardson having a noticeable advantage in carries, leading 101 to 70. Trading a first round pick for a player is a great incentive to keep feeding him the ball, no matter how bad he is.

Despite Richardson having 118 yards from scrimmage last week against the Cincinnati Bengals – his most since November of 2012 – there’s nothing special to his game. Truly a plodder who only gets what’s blocked and nothing more. No burst, no wiggle to his game.

Bradshaw has that burst and explosiveness. Was always dangerous when healthy. Feet injuries was what held him back. Maybe it’s just Richardson that makes him look good, but Bradshaw is potent.

Both are troopers in pass protection and aren’t afraid to square up to linebacker blitzes. Amazingly, Bradshaw has caught six touchdowns on 24 receptions. That’s more TD catches than the Minnesota Vikings have TD passes, 6 to 4.

– The offense runs through the Colts’ tight ends. They’re asked to do everything. They line up as traditional in-line blockers, in the backfield, and out wide. They’ll block, run short routes, and stretch the field. Dwayne Allen is more consistent than Coby Fleener though Fleener is the better athlete. Allen has a touchdown on nearly every fourth reception (5 TDs on 21 catches). He’s also a great blocker.

Plants Brian Cushing on his back in the still below. 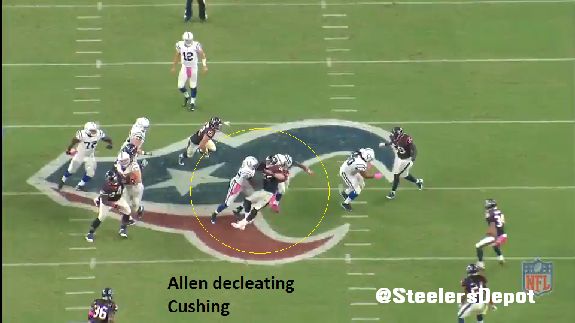 Jack Doyle is a below-average athlete and is treated as a fullback/-H-Back hybrid. Strong run blocker though. That’s his biggest asset.

– Reggie Wayne is out for this afternoon due to a shoulder injury suffered taking a big shot across the middle against the Bengals. Although his presence will be missed, he’s not the same 87 he used to be. His YPC in 2014 would have been a career low and he’s found the end zone just one time so for.

T.Y. Hilton is the clear-cut more talented receiver. Love this guy’s ability to separate. Watch him run away from this slot corner last week. 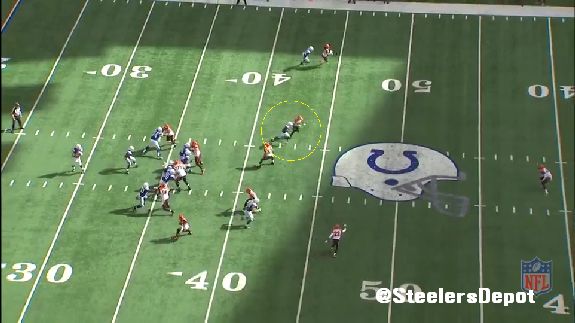 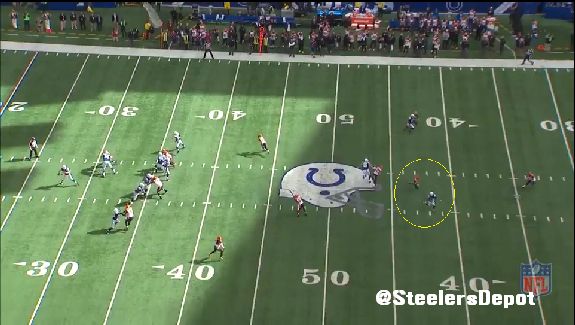 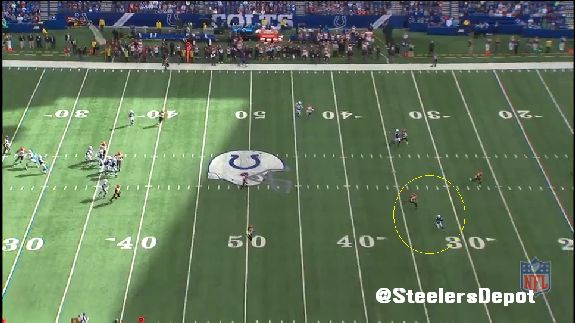 He’s caught a pass of 37+ yards in four of his last five games. He’s going to either make you play more two high than you intend to or roll the dice by playing a lot of Cover 1/3. Colts will probably use a lot of divide routes to stress the deep safety.

Donte Moncrief started to see snaps last week although same came in garbage time. The rookie out of Ole Miss has seen just 96 snaps but odds are good he gets 25-30 later this afternoon. I wasn’t a fan of him coming out of college. Thought his hands were poor and his effort was suspect, but you can’t deny he’s a vertical threat. Ran a 4.40 at the Combine with a 39.5 vertical.

– Along the offensive line, Anthony Castonzo handled JJ Watt as well as you could expect from a tackle. I’ve been impressed with his play along Andrew Luck’s blindside. However, he is 6’7. A guy like James Harrison should be able to dip him. 92 has been close to getting to the QB. I think he gets 1.5 sacks this week.

Right guard Hugh Thornton has issues with keeping his feet moving on his punch. Right tackle and Detroit Lions’ castoff Gosder Cherilus deals with a similar issue and might be the weakest man among that front five.

– Philosophically, the Colts no longer run much of their zone game. Outside zone with Edgerrin James used to be their MO. They’ve evolved into a power run team that loves to base block and pull their guards. And they adore running playaction off of pulling their guard. Give the false key to try and suck up the linebackers. They key will be watching the hat of the tackles, not the guard, to determine run/pass.

– The defensive line is full of niche pieces. They have multiple pluggers. It’s no longer the old Colts’ Tampa 2 with a bunch of one gappers. Josh Chapman, Zack Kerr, and Montori Hughes all weigh between 335 and 350 pounds. Chapman is a little fireplug out of Alabama who played through a torn ACL his senior season in college, something virtually unheard of. That was after playing through a torn labrum in his junior year. He uses his leverage and is capable of ripping through lineman on zone blocks.

Cory Redding is a lighter defensive tackle who is extremely fluid. They’ll move him around along the defensive line, occasionally standing him up. He caught my eye early.

– Jerrell Freeman carries a lot of name value but didn’t play well last week. Perhaps that was due to him playing in his first game after suffering a hamstring injury earlier in the season. Still shaking off the rust.

D’Qwell Jackson is now sporting a Colts’ uniform. Someone who knows the Steelers all too well. He has almost double the tackles of the second leading man with 52.

Erik Walden impressed me the most. A guy who was a middling rush linebacker with the Green Bay Packers, Walden already has tied his season high in sacks with three. He also excels against the run. Strong with a violent punch and plays with proper leverage. Watch him knock away the Bengals’ lineman, find the runner, and make the tackle. 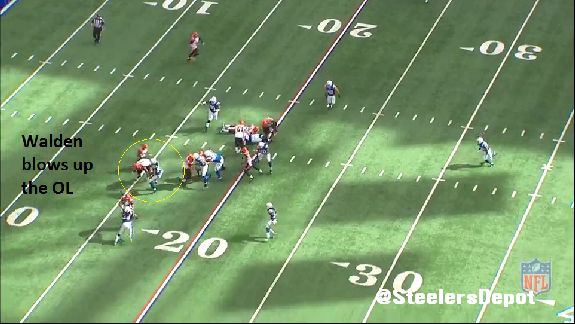 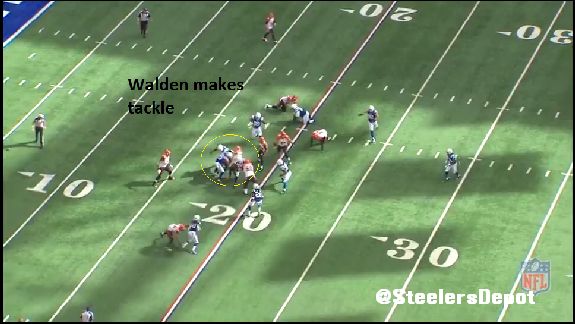 – Not a ton for me to note in the secondary. The duo of Greg Toler and Vontae Davis is pretty strong. Both close on the ball well. Those two and safety Mike Adams make up for all six interceptions the Colts have. Each with two.

– Schematically, again, they are not the conservative, drop seven defense Tony Dungy ran. The Steelers have seen some passive teams the last few weeks. Not these guys. On 3rd and long, the Colts have pressure packages and will send heat. They like to move players around, stand the DT to the outside, move an OLB to ILB, while stunting/twisting. Couple examples below. 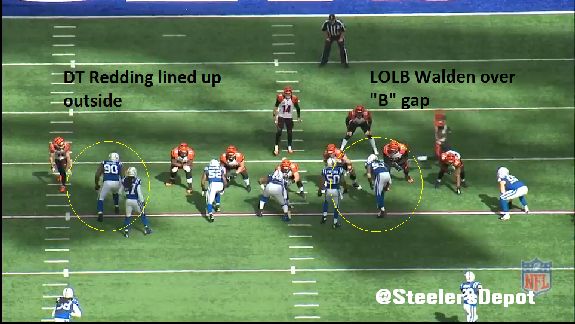 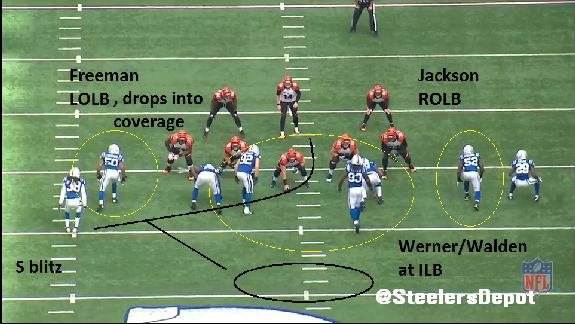 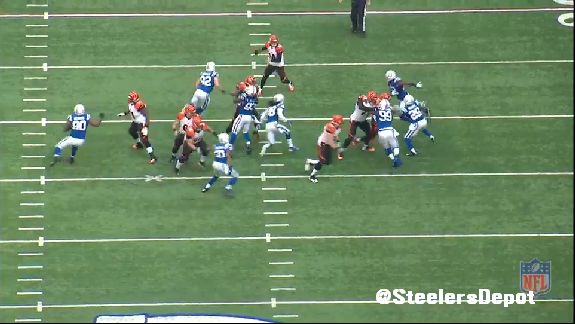 Steelers must be prepared for that. Communication will be vital, especially after allowing two sacks to missed stunts against the Houston Texans. Have a feeling the Colts will get to Ben Roethlisberger a few times.

However, it can spurn them. Here, Arian Foster leaks out into the left flat and is left wide open for a splash play. 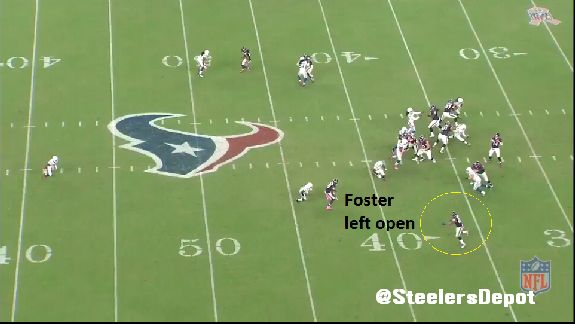 – Couple of quick notes. Pat McAfee serves as the team’s punter and kick off specialist. His kicks usually result in touchbacks. The Colts have also run one surprise onside kick in 2014. McAfee recovered his own kick against the Texans. The Colts’ coverage unit initially plays tight to the sides and if the return unit over adjusts, it creates a lane up the middle.

– Kick and punter returner Griff Whalen is dangerous. He’s yet to reel off a huge return but by my manual count, has broken at least one tackle on 11 of his 28 returns. Coverage unit led by Antwon Blake and Ross Ventrone will have to again be strong.