Two of the eight completions that Cleveland Browns quarterback Brian Hoyer had Sunday in the win over the Pittsburgh Steelers came on similar plays and both went to tight ends working across the field away from a play action rollout.

While it’s hard to assign blame on both of those plays without knowing for sure what the exact defensive call was, I think you can look at both plays and get some pretty good clues.

On the first big play to tight end Jordan Cameron, the Browns use 13 personnel and they boot Hoyer out to his left away from the faked outside zone run to the right. At the snap, Cameron, who is the inside tight end on the let side of the formation, heads to the second level like he’s going to block one of the Steelers inside linebackers. He then motors past them is left uncovered.

While the end zone view makes it look like Steelers safety Troy Polamalu is to blame because he peels off of Cameron to give help underneath on the crossing route, I’m pretty sure he had zone coverage on his side of the field and actually did the right thing.

So who had responsibility for Cameron?

If you look at the second long completion in the game to Browns tight end Jim Dray in the third quarter, you will see a similar concept only going the opposite direction. This time, however, inside linebacker Sean Spence picks up Dray coming across the formation and you can also see him pass off Cameron to the other side of the field. You will also see Polamalu deliberately cover the underneath zone to the right of the Browns formation as well.

If you apply to the first play what happened in the second play, this would lead you to believe that either Spence or Lawrence Timmons was responsible for Cameron. As you can see by the still picture that I have included, both Spence and Timmons are attempting to cover Dray as he works toward the middle of the field. 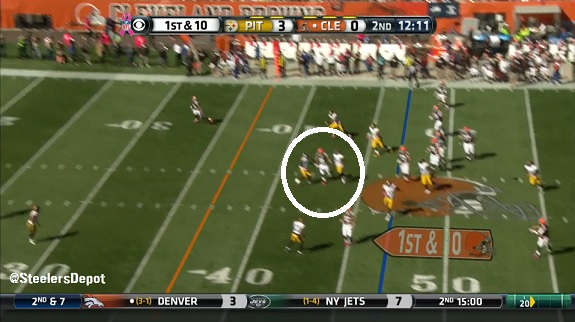 I’m only guessing, but it looks like Timmons might be the culprit and he has no chance after being caught up in the wash underneath. We more than likely will never know for sure, however.