With inside linebacker Lawrence Timmons taking upon a greater leadership role in his eighth season, shifting from the mack to the buck linebacker position, the Pittsburgh Steelers are depending on him more than ever.

The Steelers are transitioning on defense, starting younger players, letting older players go, and even adding pieces in free agency. With all the moving parts going around, it only makes sense that the team would need to lean on a veteran such as Timmons.

The problem is, as I’ve already written previously, the new defensive signal caller hasn’t been living up to his role often enough during the course of the first two games of the season.

Early on the Baltimore Ravens’ first drive of the last game, for example, Timmons dropped off in center field in coverage when Joe Flacco found Bernard Pierce over the middle for a catch and run.

Timmons had the angle to make a play in the open field, including a running short. He even dipped his shoulder early and guessed the right direction Pierce was going to cut. But he was only able to muster a leg tackle, which the back was easily able to slip. 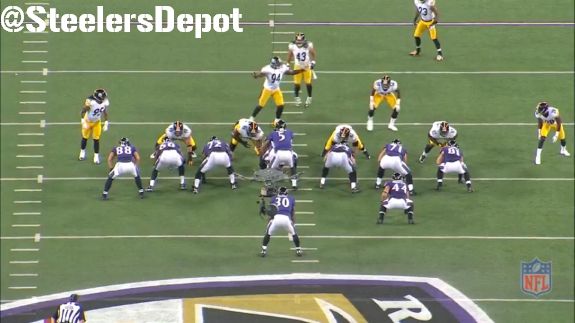 Later on in the drive, the Ravens were faced with a fourth and one situation, but Timmons had trouble getting the play call in and setting the defense. As a result, not only was he unprepared at the snap, but so was the rest of the defense, as seen in the image above. Baltimore took advantage of the lapse in communication to get great push up the middle for an easy first down.

In the early portions of the second quarter, however, Timmons was clearly getting gassed by the Ravens’ no huddle attack. After making a nice play by cutting through a hole to make an arm tackle on Pierce for a short gain, the pace got to him physically. 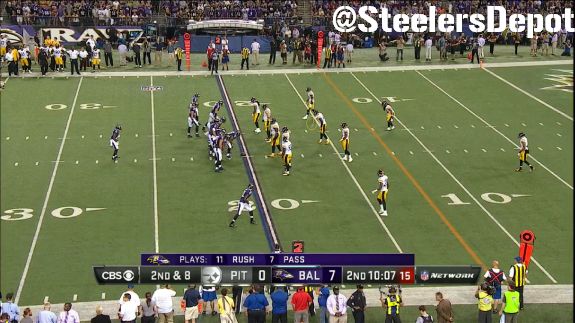 He literally threw up on the field. And the make matters worse, Flacco targeted him in coverage on the following play. He was visibly shaken and at his physical limit defending the pass, and the coaches took him off the field when they saw this, replacing him with Vince Williams for the remainder of the drive.

Even though the Steelers made an excellent stand to begin the third quarter, however, it did not come without another whiff on a tackle by Timmons. Facing third and 20, Flacco threw to Justin Forsett, and Timmons, coming in with a clean angle, flailed around him as he cut quickly to his left.

It’s clear that this Steelers defense is a work in progress, and that means Timmons getting adjusted to his new surroundings. But he has also been struggling individually, and it seems that fatigue played a role in the last game. Two games in four days didn’t help, but he’d better hope he can stand up to a no huddle attack in the future.