As was the case with many Pittsburgh Steelers defenders, fourth-year defensive end Cameron Heyward got his season off to somewhat of a slow start. In fact, he also underwhelmed through much of the preseason as well.

But he played easily his best game of the season, and perhaps one of the better games of his young career, this past Sunday against the Carolina Panthers, getting several pressures against Cam Newton and having a sack nullified by penalty.

The first of those hits came on the Panthers’ third play of the game, when he got into the chest of left guard Amini Silatolu and bull rushed him back into the pocket. While Newton did get off the pass for nine yards, Heyward was able to put him under duress, and got a piece of him after he threw the ball.

Heyward did get to Newton on the first play of the second half, but, as previously mentioned, offsetting defensive and offensive holding penalties wiped the play off the board and the down was replayed.

The Panthers allowed the defensive end access around the edge, believing that they would be able to contain him merely with a tight end and a running back, but he got inside of both of them and latched on to the quarterback’s jersey, ultimately bringing him down for a nine-yard loss.

Poor Newton got drilled by Heyward late in the first half straight up the middle with the Steelers in their sub-package. Heyward was lined up at zero-tech with Brett Keisel shading off the outside shoulder of the right tackle. Both outside linebackers were on the right side, while both inside backers were up at the lime as well, showing six rushers.

Five of them came, with Ryan Shazier dropping to cover Newton’s safety valve. As the center passed him on, the running back completely ignored Heyward and allowed him to plant the quarterback into the ground as he heaved a desperate incompletion. 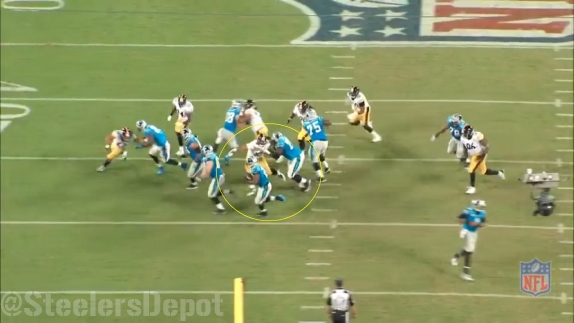 Early in the second half, on the second play, the Panthers tried to string out the defense on a stretch run to the left. Heyward immediately won outside leverage against left tackle Byron Bell, not only forcing him to hold, but also blowing up the running lane for Jonathan Stewart.

The back was eventually brought down for no gain, but Bell was flagged for holding, setting the Panthers back in their own end.

Early in the fourth quarter, Heyward got to Newton one last time, and knocked him out for good after taking one too many shots to the ribs. He lined up on the left side this time, over right guard, with Keisel lined up wide of the right tackle to his left. The outside linebackers both occupied the right side of the line in the nickel.

Off the snap, Heyward shifted left before charging forward, bull rushing the right guard. It was enough to knock him out of his path, and from there on Heyward was unabated to the quarterback, getting in one last rib shot and forcing an appearance by Derek Anderson.