Film breakdown of the play of Pittsburgh Steelers tackle Mike Adams versus the Buffalo Bills.

1. 1st and 20, 7:46 3rd. No picture or GIF really worth showing but Adams does a nice job setting his hips and sealing the defensive end on a run off Adams’ outside hip. Opened up a lane even if the run only amounted for a few yards.

2. 2nd 10, 1:11 3rd. Probably his best play of the night. Glances at the three tech providing the slightest of help before shuffling over and sealing the end. Shows a good angle and some quickness to reach the edge. 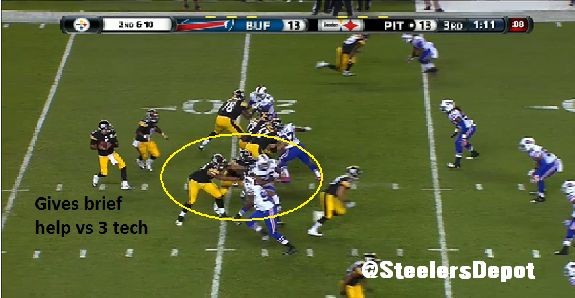 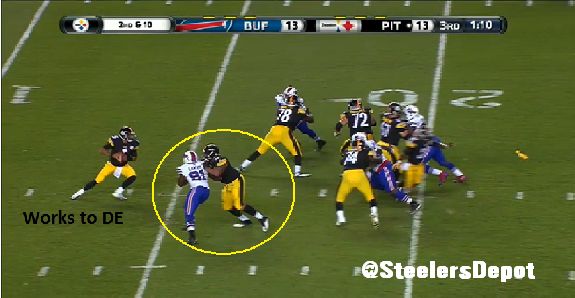 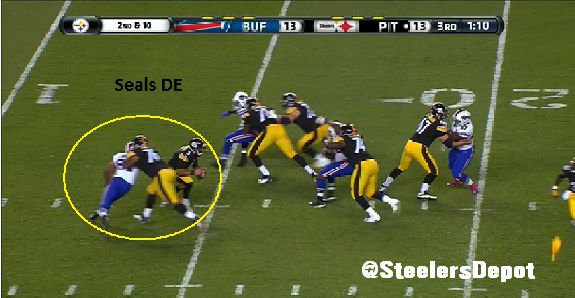 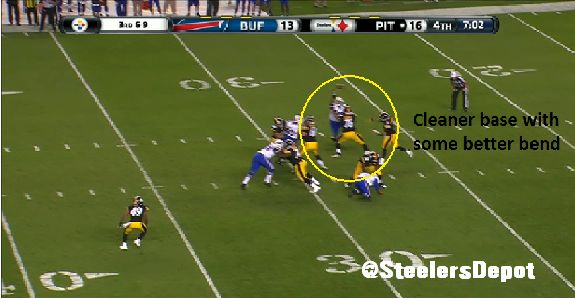 1. 1st and 10, 15:00 3rd. His first snap of the game. Manny Lawson bull rushes him, getting into Adams’ pads. Watch Adams’ lower half. His left knee locks up and the power he could derive from disappears. It causes him to be walked back. 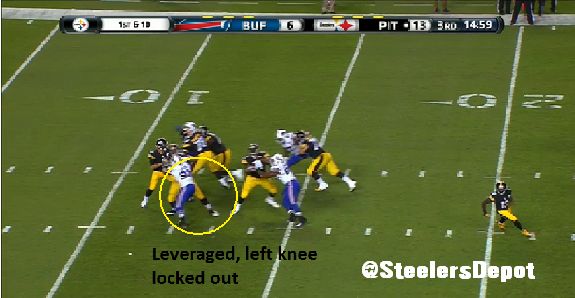 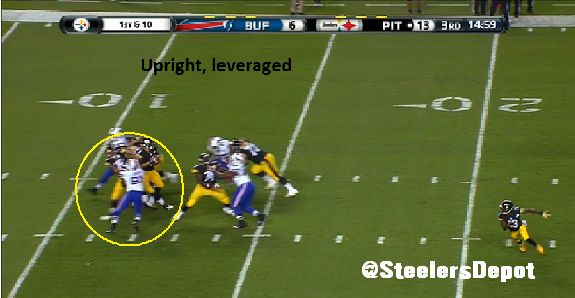 Bull rushes are never pretty to defend but you still have to maintain your lower half. Keep the knees bent, the feet moving. Adams fails to do either here. 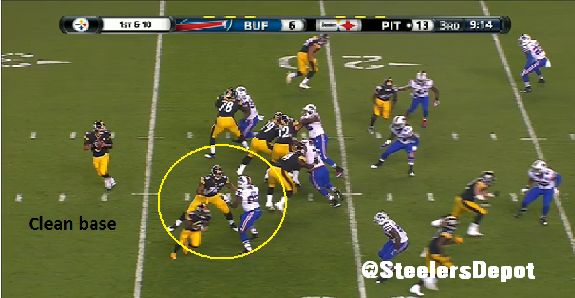 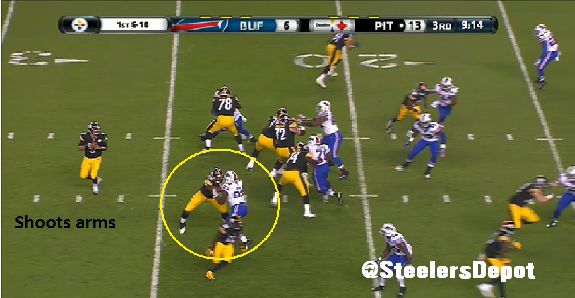 But then the defensive end smacks them away and from that moment, Adams has lost. Simply not able to recover and get reengaged. Can’t get his hands back into the play. 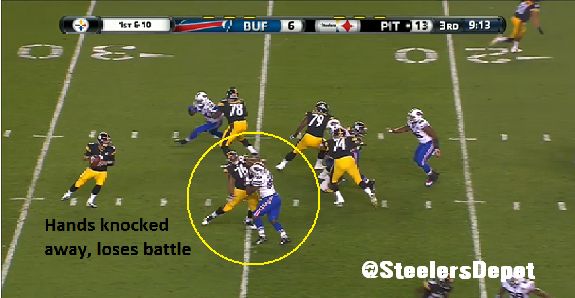 The end gets his arms into Adams’ chest, completely gets him uprighted – back locked out, leaning backwards. Game. Set. Match. 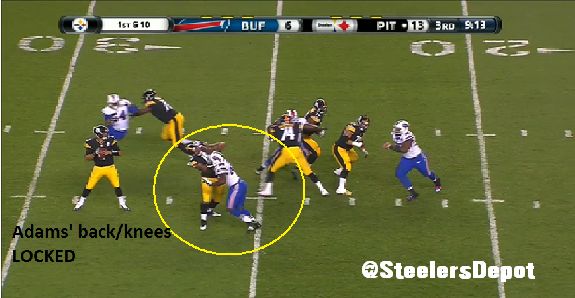 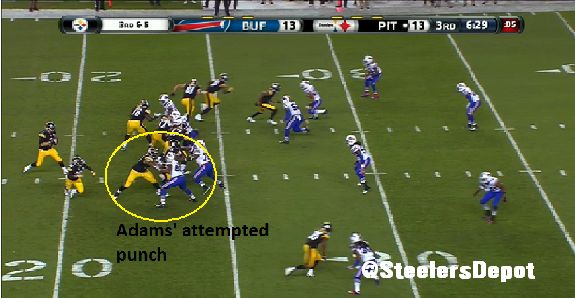 And then a few frames later as the DE starts to swap hips and slip past. 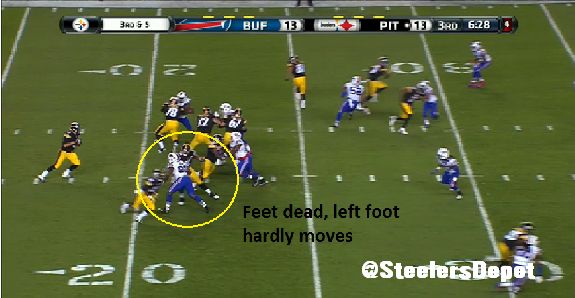 Pay close attention to the position of Adams’ left foot.

In the first shot, it’s positioned at about the 23 yard line, perhaps a shade inside. On the second, it’s about a foot in front of the 22. Meaning, his foot had moved only about two feet from his punch to trying to slide and seal the end. Won’t cut it in the NFL. Not even close.

Unsurprisingly, he gets beat and is now in trail. Does have some strength to help seal the edge but there may have still be pressure had the pass not been released when it was. 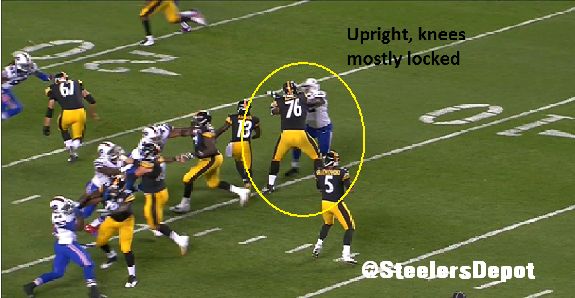 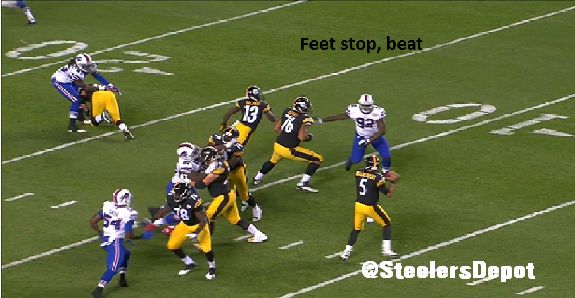 5. 3rd and 14, 3:17 3rd. The defensive end has his hands to the inside of Adams, putting him in control. It’s a position of power. He’s able to knock the tackles’ hands away. 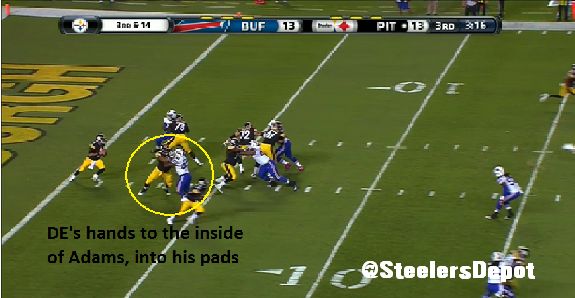 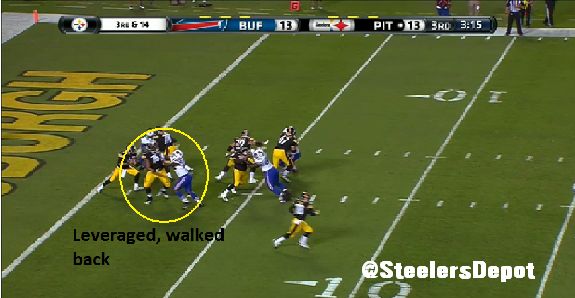 6. 2nd and 9, 7:11 4th. This appears to be a pass play Bruce Gradkowski checks to. Makes sense to get out of the run due to the eight man front. Mike Adams apparently doesn’t get the memo, firing off the ball with low hat (helmet down). 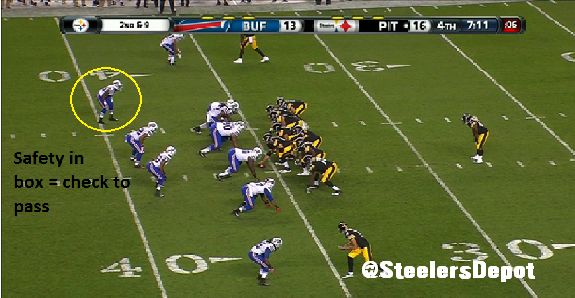 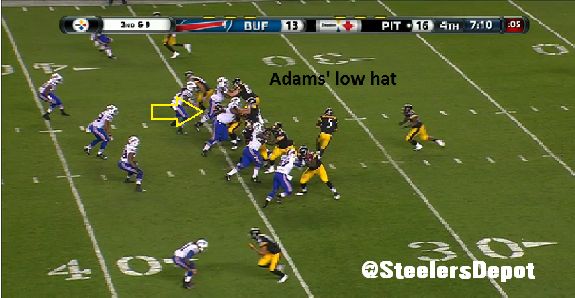 He chips and works to the second level, apparently thinking this is still a called run. Add missed assignments to the list of woes from his game so far. 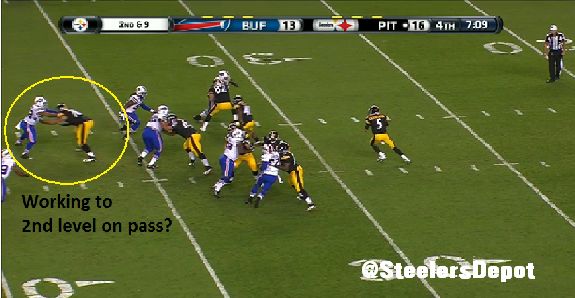 7. 1st and 10, 1:56 4th. Adams’ hands are lower than that of the ends and his head is down on contact. Both negatives. Need to see what you hit. Lets the defensive end get into his pads, which he does, and again, put himself into control.

Compare the helmet of Adams to Guy Whimper’s. 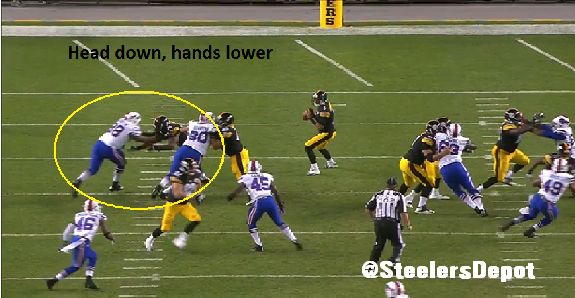 As a result, Adams gets leveraged and upright yet again.

8. 1st and 10, :49 4th. Seeing the same issues. Maybe even worse here. Defensive end stabs into the tackle’s pads, once again getting under him. Adams is only grabbing onto his elbow and has zero sense of leverage or power.

Adams gets leveraged so much that his left leg completely comes off the ground. Flies up into the air. It’s not a step back, attempting to give ground – as you’ll see in the GIF and pictures below – it’s Adams not being able to effectively absorb the punch and getting thrown off his base. There’s no power anymore for Adams. He’s on skates and isn’t going to be able to anchor. That power comes from your lower half. And that’s hard to do when your leg is nearly at a 90 degree angle.

And the worst part? The defeneder is Ike Igbinsoun, the second-year man and short-lived Steeler. He’s almost certain to be cut. So that’s Adams losing – badly – to a guy who is going to hand in his playbook in ten days.

Maybe Adams should, too. 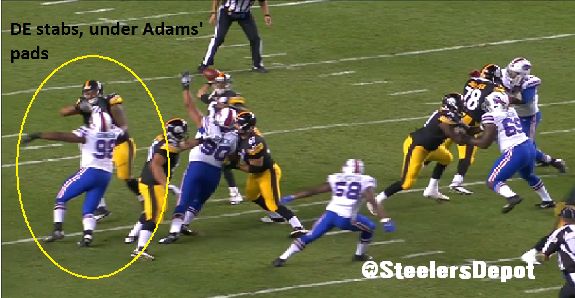 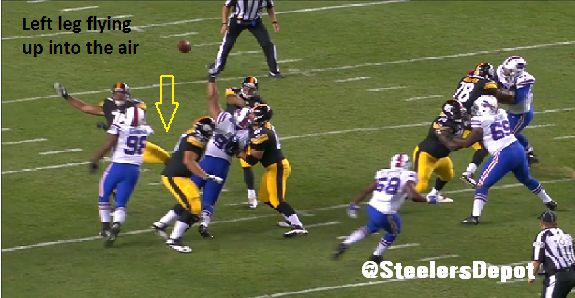 You already know how I feel about this performance. It was ugly and all of Adams’ bad habits were again revealed.

From an overall picture, Adams still can’t think and play. Can’t multi-task. He’s either so worried about his technique that he plays slow and you get issues like his legs going dead on his punch. Or he is able to seal by abandoning his kickslide and getting by on raw talent. He isn’t able to multi-task. Shoot his arms and bend his knees. Punch and keep moving laterally.

For a guy in his third year, it’s never seemed like he’s adjusted to the speed of the game. At this point, he should, and I don’t know if he ever will be able to.

The Pittsburgh Steelers need to take a serious look at targeting the best swing tackle available at the final cutdown date. The Steelers just can’t count on Mike Adams to play, even over the short term. They need to add someone they can rely on in the event of an injury.

Mike Adams is Emmanuel McCray on a scholarship.