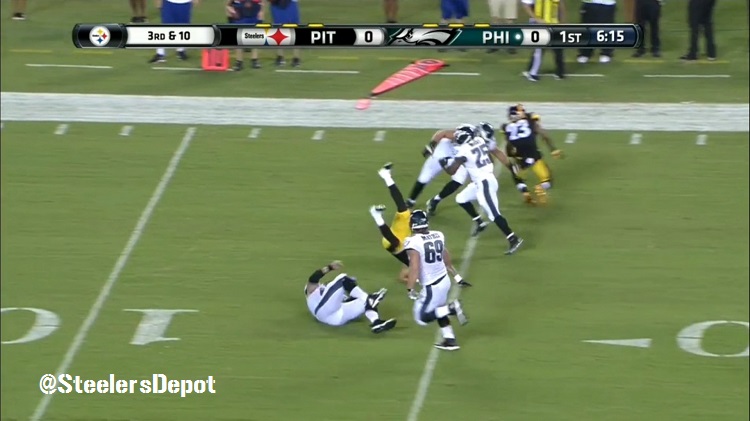 When Philadelphia Eagles head coach Chip Kelly has his offense firing on all cylinders, it really is fun to watch. Kelly is a master of doing a lot out of one formation with very interchangeable personnel. Packaged plays.

Thursday night against the Pittsburgh Steelers, the Eagles first touchdown to running back LeSean McCoy was not only executed very well, it was set up well by previous plays.

As you can see in the first gif below, the Eagles have sidecars next to quarterback Nick Foles. Just prior to the snap, the weakside back motions behind Foles. A play fake to the other back and then Foles can go through his progressions. On this play, Foles misses rookie Jordan Mattews on the out route. This should have been an easy pitch and catch, in my opinion.

The Eagles first possession stalled but during their next possession, they showed us the same formation again only this time they used 11 personnel with a wide receiver lined up as the weakside sidecar. Same pre-snap motion, same play-fake with the only difference being the side of the slot receiver, which in this case it was tight end Brent Celek.

Foles again misses the throw here as Celek had a full step and a half on safety Troy Polamalu. It should be noted, however, that the Steelers inside linebackers make sure to spy both sidecars as they flare out to each side.

So what do the Eagles do on the very next play? Same exact personnel, same exact formation, only this time Foles gets the Steelers defense moving to the strongside with a pump fake to the motioning sidecar. He then spins and dumps the ball off on a screen to McCoy and he’s off to races with an escort of linemen out front.

So what happened defensively? The Steelers had nickel personnel in the game and look like they are playing cover-2 with man across. You will notice that rookie linebacker Ryan Shazier has Celek in the slot while linebackers Lawrence Timmons and Jarvis Jones have changed positions. Timmons is the pass rusher on the right and Jones is left to presumably spy McCoy.

Uh oh, Jarvis, you’re going the wrong way and you forgot about McCoy. Once Jones starts going the right way, Eagles center Jason Kelce is as well. Look at this fantastic block that Kelce puts on Jones. He should have charged Jones for that ride. Don’t tell him this game doesn’t count.

Also on the play, safety Mike Mitchell stands no chance against Eagles right guard Todd Herremans. At least Mitchell forced the play to stay inside him as that is the only positive.

Eagles wide receiver Jeremy Maclin ties up cornerback Cortez Allen in the end zone and Polamalu just can’t get over there in time to prevent McCoy from scoring.