1. 2nd and 10, 14:24 4th. Does a great job of meeting the running back in the hole and sticks him. The back doesn’t fall forward and it turns into just a two yard run game. Really quality run fill here. 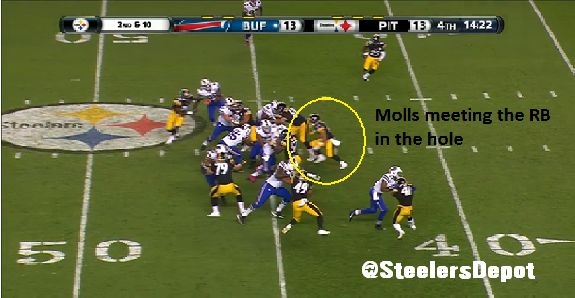 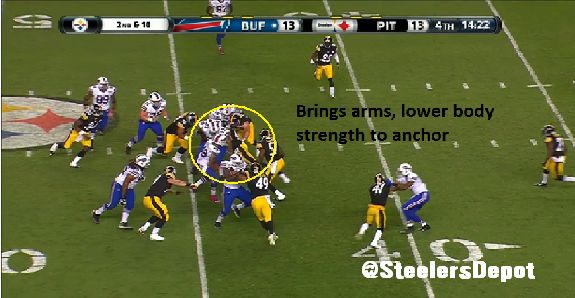 2. 1st and 10, 6:17 4th. Molls, working as the Buck linebacker for this game, is unblocked. Looks like one of the Bills’ lineman who tried to combo block tripped and fell, leaving Molls free. Takes advantage of it.

He meets running back Ronnie Wingo in the hole. Brings his arms, snaps his hips, and rolls through. Stands the back up and drops him at the point of impact. Excellent job of absorbing the play from a player in motion without getting blown back on the collision. That’s technique and some true strength, both upper and lower body, exhibited on this play. 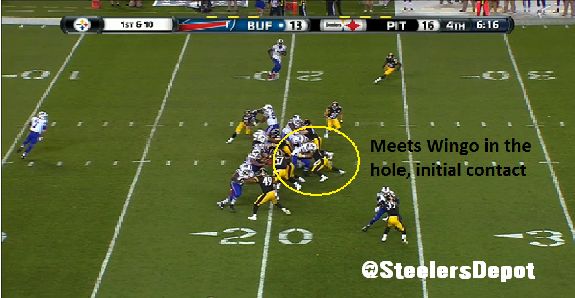 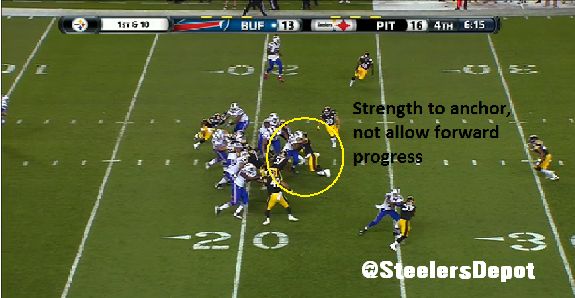 Wingo is no small back either. He’s listed at 6’3 231 pounds. Molls is three inches shorter and only eight pounds heavier. It’s an impressive “win” for the linebacker.

1. 3rd and 6, 11:49 4th. Appears Molls is lined up off the left edge. It’s nitpicking and pass rushing certainly isn’t his forte, but I would have liked to see a better showing here. Appears to be indecisive despite being one on one with the back. His “move” is easily rebuffed. Probably doesn’t get pressure regardless with the ball coming out fairly quick but a better attempt would have been encouraging.

2. 2nd and 8, 3:58 4th. Just one of those moments where Molls is going to be physically overpowered. Little chance of winning here. 340+ guard Cyril Richardson works to him at the second level. With the enormous guard having some momentum, Molls it put on skates as soon as there’s contact. Ends up getting knocked on his back.

3. 1st and 10, 3:22 4th. Evan Rodriguez lead blocks and the H-Back gets under Molls’ pads. Blows the linebacker back a yard or two, turning him in the process. 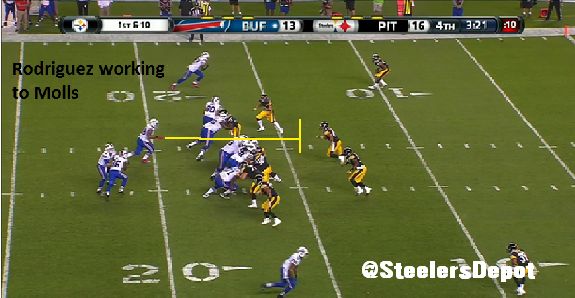 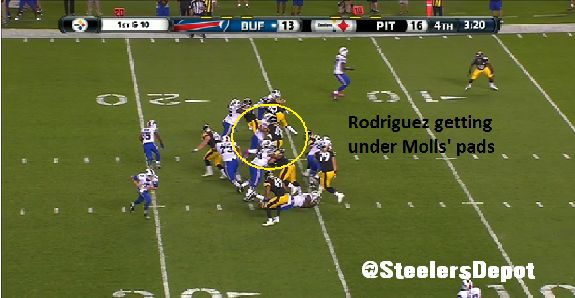 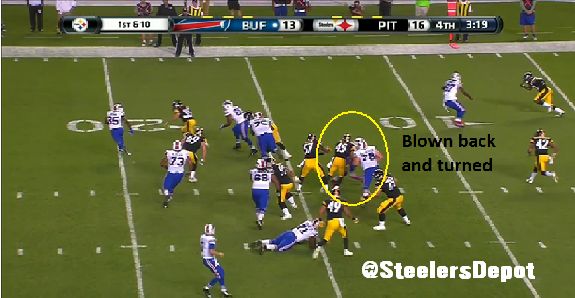 Had the runner followed that lead block, there’s little chance Molls is going to be able to fill the gap. Tough situation to defend though, I realize that. Needs to be stronger, some more “sand in the pants” if you’re fond of the cliché, to take on the block.

If you read my scouting reports prior to the draft, you know I am a huge Chris Borland fan. Molls is like a poor man’s version of him. But a very, very poor man. Like Borland, Molls has a knack for finding the ball and is at his best when he’s left clean and free to roam. He’s fearless and willing to meet the runner in the hole. He shows form tackling and some real lower body strength to absorb these big collisions. For a UDFA, it’s extremely impressive.

But unlike Borland, Molls runs into trouble when he has to work off blocks. Don’t see the hand-fighting to shed. And when lineman get locked on, Molls is easily washed.

I didn’t note this above but he also looked high in his pedal the few times I got to watch him drop.

You could make a case that Molls should get a spot on the practice squad over Jordan Zumwalt. Molls playing Zumwalt’s Buck spot certainly helps those odds. But Zumwalt is still likely a notch ahead, provided he can see the field later today.