The 2014 compensatory draft picks have been announced and the Pittsburgh Steelers have been awarded picks in 3rd round (97th overall), 5th round (173rd) and 6th round (215th) for 2014 NFL Draft.

The third round pick comes courtesy of the loss of wide receiver Mike Wallace last offseason while the fifth-round pick is likely for the loss of cornerback Keenan Lewis.

The sixth-round pick that was awarded is quite a surprise and it probably encompasses the Steelers loss of running back Rashard Mendenhall and safety Ryan Mundy.

The Steelers also lost safety Will Allen last offseason, but he was released by the Dallas Cowboys just a few weeks into the 2013 season.

As far as free agents added last year, the Steelers signed quarterback Bruce Gradkowski and running back LaRod Stephens-Howling. Gradkowski never played a down in 2013, however, while Stephens-Howling was lost for the year in the season opener. 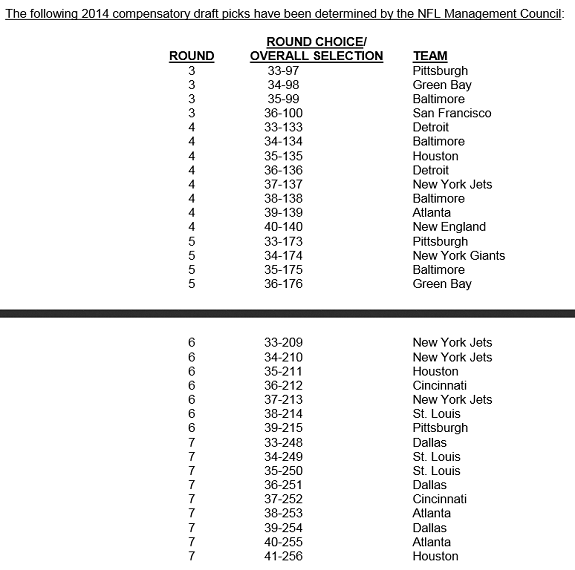