Using the All-22 Coaches Tape, an evaluation of nose tackle Cam Thomas. Beginning with individual game breakdowns and notes.

I watched four games of Thomas in 2013. For each, I did a pre and post snap tally. Looked at the following categories.

Snaps at Zero or One Tech

Started with Week One against the Houston Texans.

The Chargers’ defensive formation seemed a bit atypical as they got on top of Houston early, who was forced to abandon the run for the majority of the game until the Texans rallied and eventually won. The 20 snaps in subpackage seem to be atypical.

Thomas got a lucky bounce on the first play of the game. Intercepted a pass that was batted by the right outside linebacker. Nice way to start the year.

Mix of good and bad in this one. Did show some active hands and could be disruptive. Were times where he was able to split lineman in Houston’s zone blocking scheme and get disruption. Forces the back to the inside and makes the tackle.

Here he runs over the right guard and gets into the backfield. 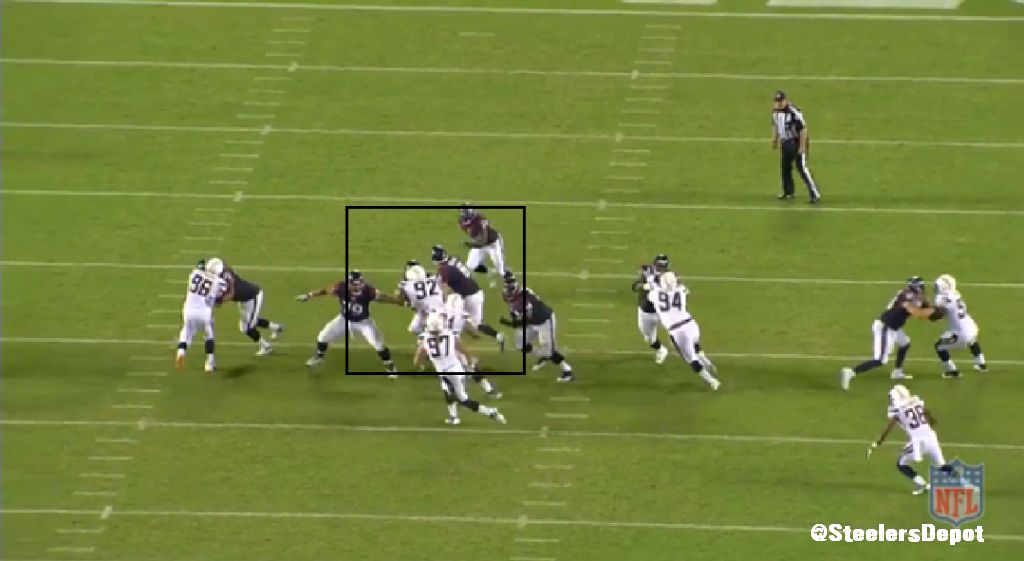 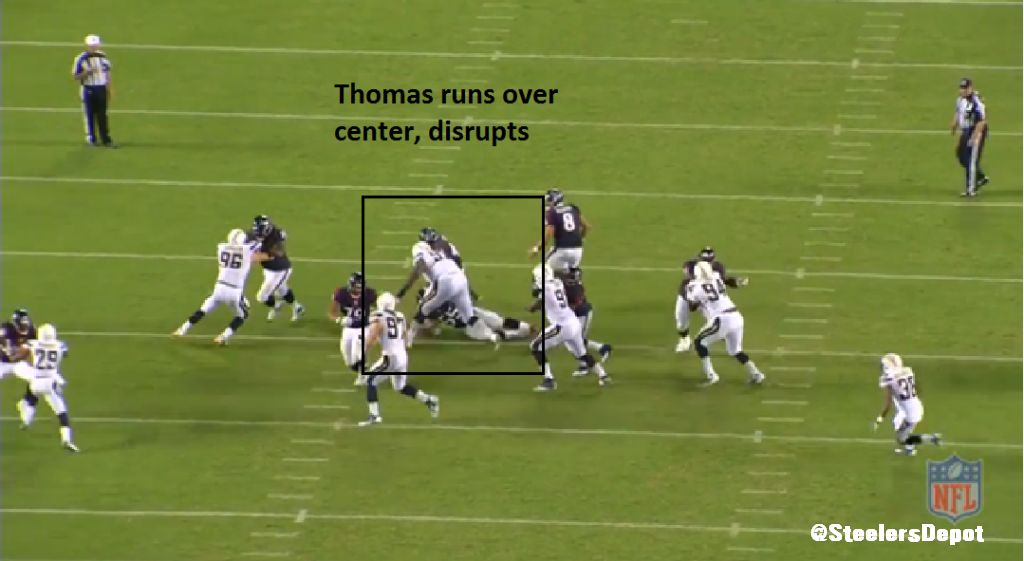 Other times where he got washed and didn’t fill his gap, the key to defending a ZBS. Still shot of it here with the center pushing him upfield, taking him away from defending the backside “A” gap. Might look like it but isn’t double-teamed by the right guard yet either. 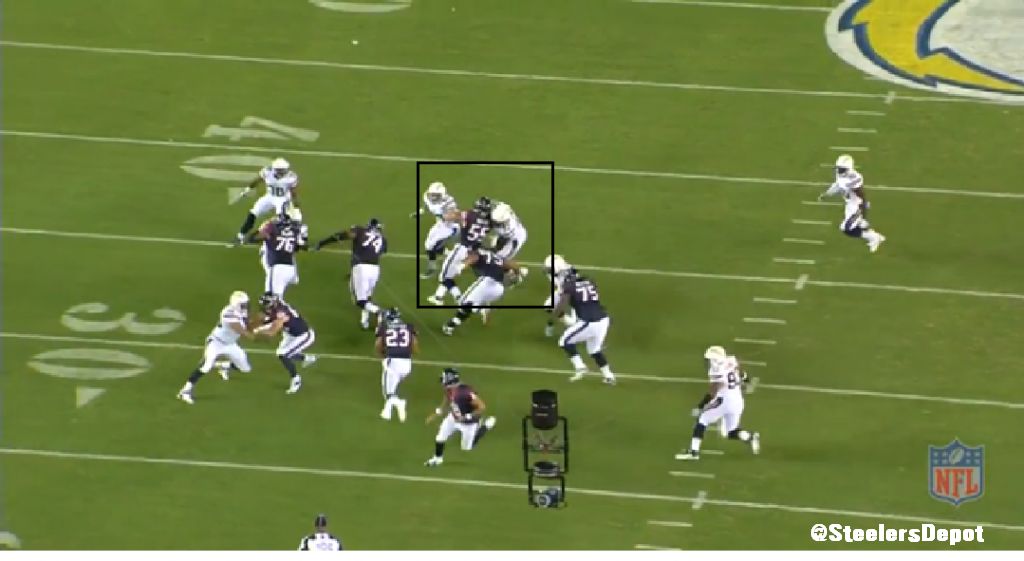 After getting my first look at him, it was clear he was an athlete in the loosest terms. Lumbered around the field.

As a pass rusher, did show surprisingly active hands. Used his strength for a decent bull rush and showed the ability to collapse the pocket.

At this point, the Chargers’ apparently settled down schematically. Solely a 3-4 team, likely decided by Dwight Freeney’s injury after rushing him with his hand up and down in Week One. After seeing time at three tech in Week One, Thomas was solely a nose tackle in the Chargers’ base 3-4. When they went to subpackage, Thomas was on the sidelines. Predictably, didn’t see a snap when the Raiders went into their two minute offense to close out the first half.

Again, saw a lot of inconsistency defending the run. On the good, here’s Thomas holding the point against the center. Then sheds him and engulfs the running back for the tackle.

But he was vulnerable to getting washed as well. Next four stills are all the same play. Left guard Lucas Nix explodes off the ball, gets into Thomas’, and drives him well off the ball. Hole the back runs through is exactly where Thomas lined up. 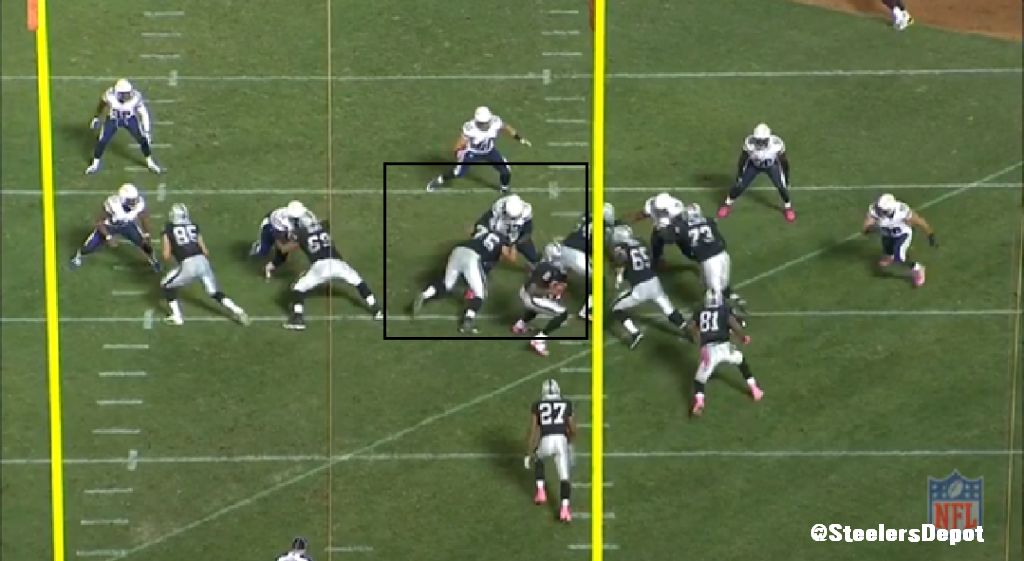 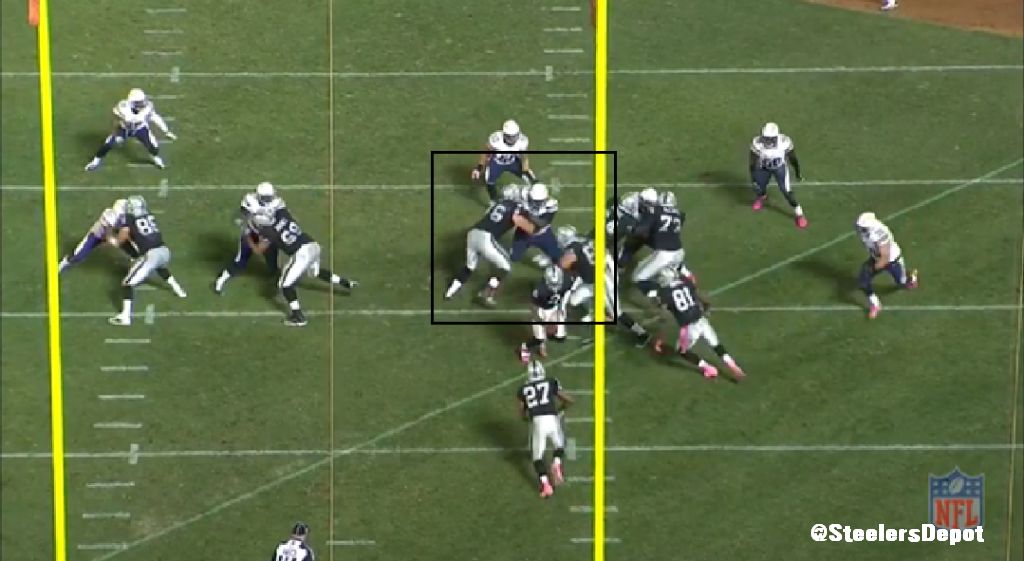 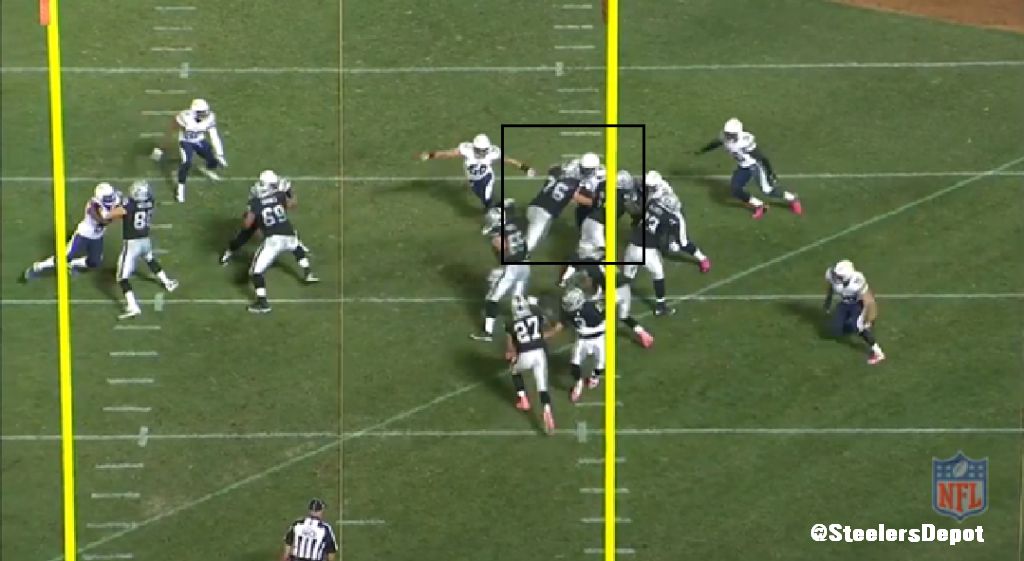 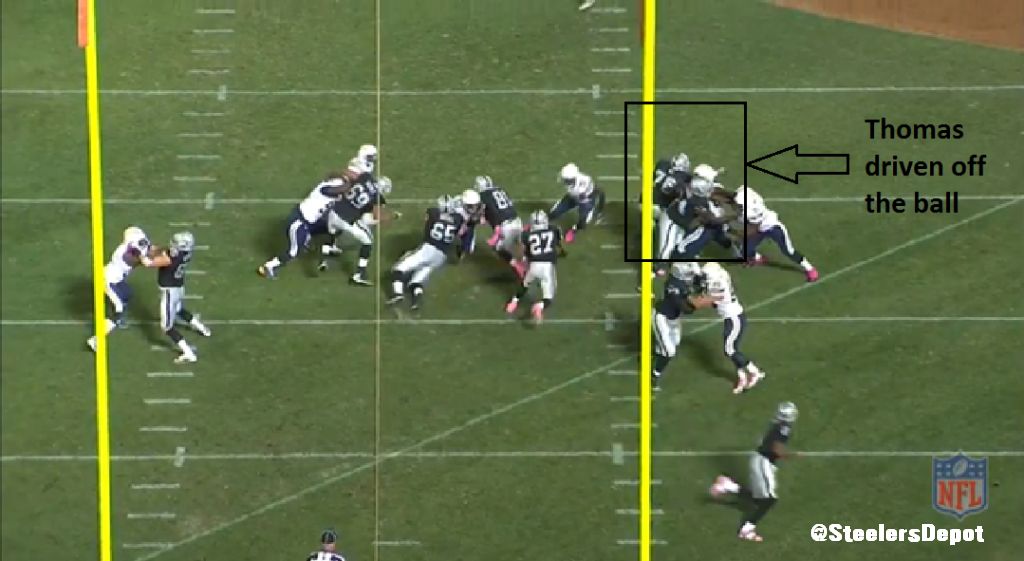 As a pass rusher, he again occasionally showed the ability to collapse the pocket via bull rush. Nothing else in his arsenal though you wouldn’t expect anything else from a 330 pound nose tackle.

He also dropped into coverage once. 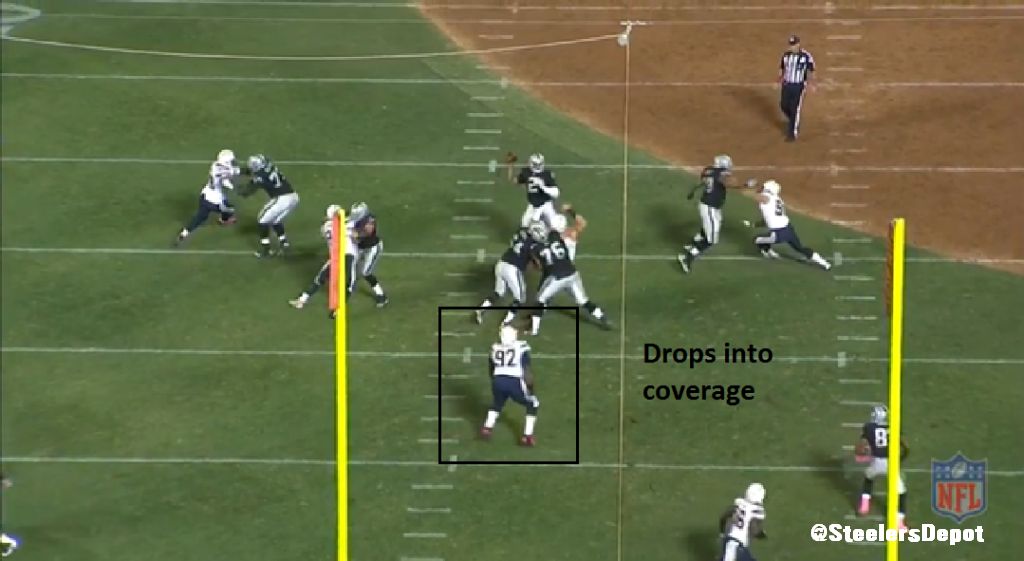 This was the last game Thomas was the starter, getting benched after this week in favor of Sean Lissemore. It wasn’t a true benching as he still saw time, more on that later, but his playing time was reduced in the following weeks.

I was a bit hesitant to watch this game because of the preconceived notion that Thomas played poorly. But it was a good opportunity to watch an opponent Thomas will be facing twice a season.

His performance wasn’t as bad as I thought it would be for someone who got benched but it couldn’t be classified as “good” either.

Kyle Cook sticks to him and drives him out of this run.

Big problem Thomas has is his limited athleticism. When facing zone blocking teams, he struggles to move down the line because of his lumbering self. Great example in the play below.

Lissemore, the right end, actually ends up making the tackle. A smaller build, he has the athleticism to get down the line and make the tackle. All Thomas can do is watch.

Didn’t start the fourth quarter when the Chargers were in base. Lissemore replaced him for the moment but Thomas started the next series and for the rest of the game.

Dropped into coverage once.

First game I watched after his “benching”. The “five tech” numbers get a tiny bit murky and need some explanation.

Four of the seven times, Thomas was the defensive end in a 3-4. But he was playing more of a three tech than what the Steelers’ use, which typically sees their ends play at least a four tech (head up on the tackle) or at its closest, an inside shade against the tackle (head up to the inside shoulder). Example below from Week One compared to where Thomas lined up. 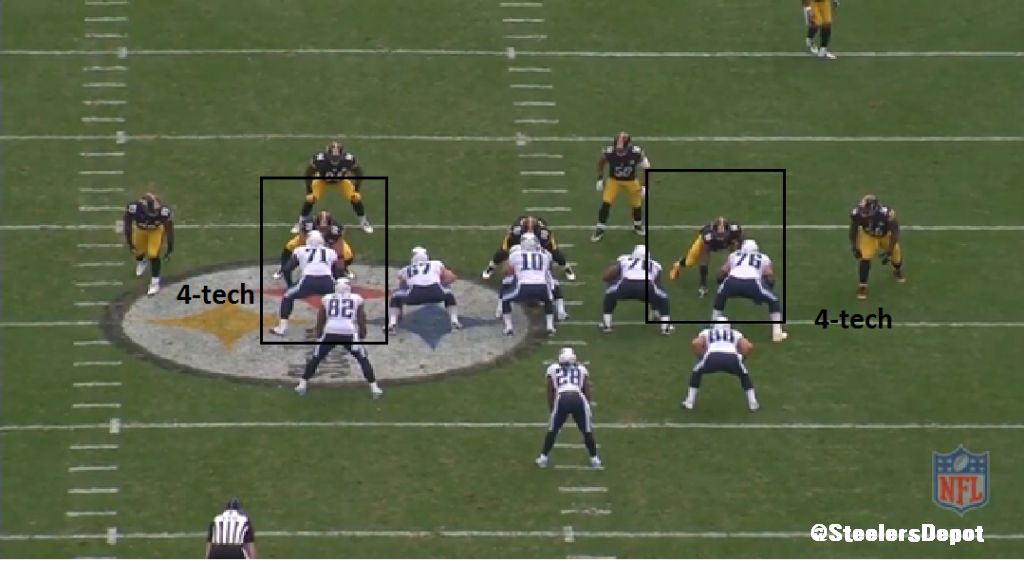 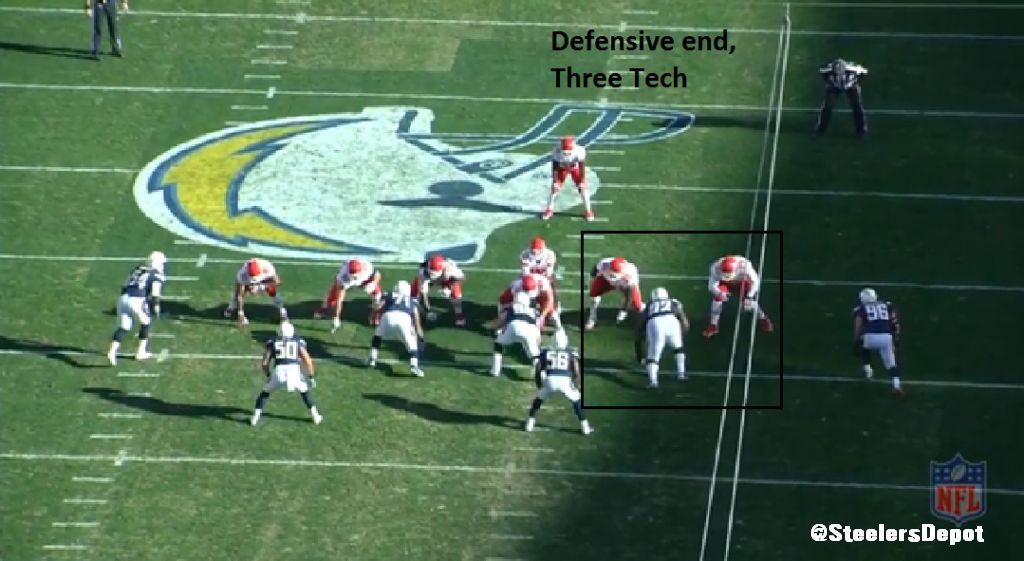 The other three saw Thomas playing head up or outside of the tackle in a more “true’ five tech.

Again, Sean Lissemore started at nose. But he injured his shoulder and ended up logging just eight snaps on defense.

One particularly disappointing play of Thomas against the run. Gets driven back by tight end and former Steelers’ inactive superstar Richard Gordon. Not an encouraging sign.

Although Thomas flashed, he wasn’t as dominant as I’d expect against the Chiefs’ backup offensive lineman. Guys like Eric Kush and Rishaw Johnson were having success against Thomas and pushing him off the ball. Double-team/chip on the stills below and instead of collapsing, he gets washed. 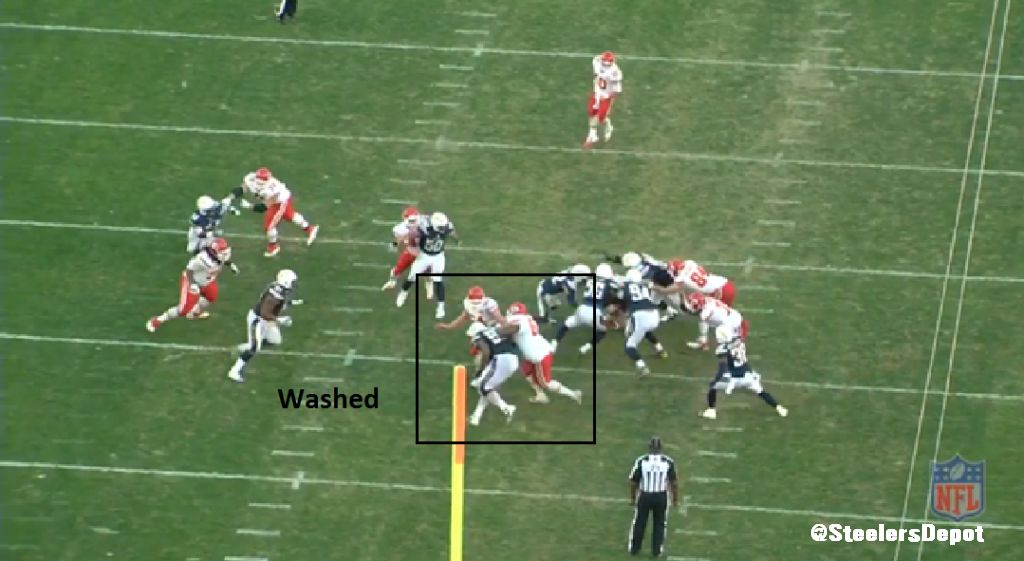 As a pass rusher, didn’t use his hands well. Ends up on the ground on this rush. 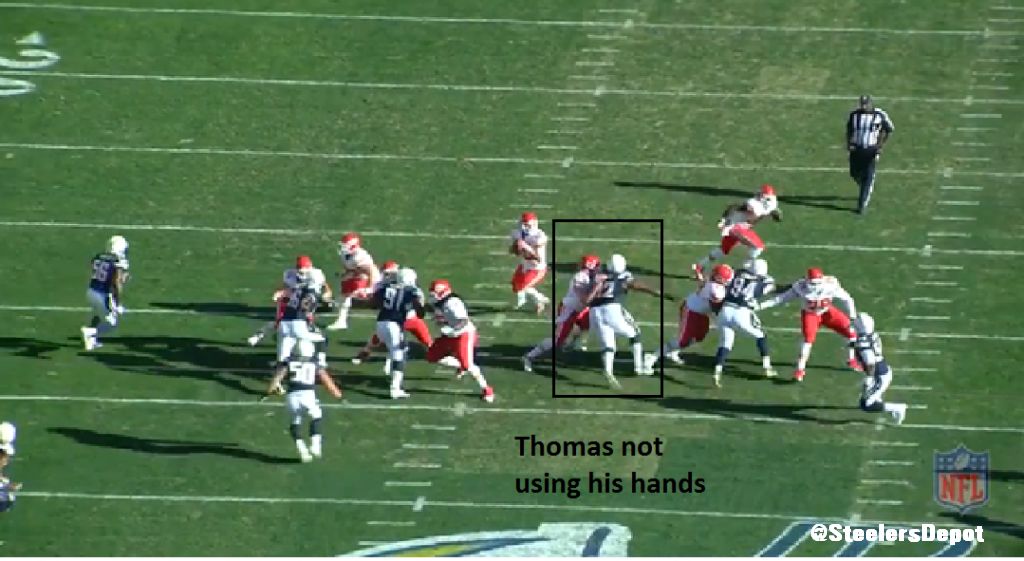 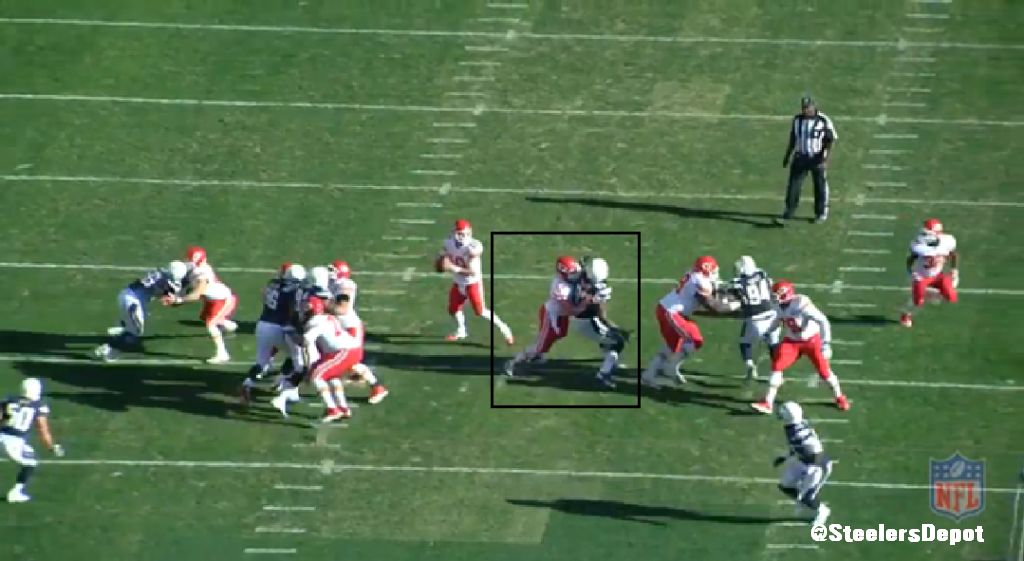 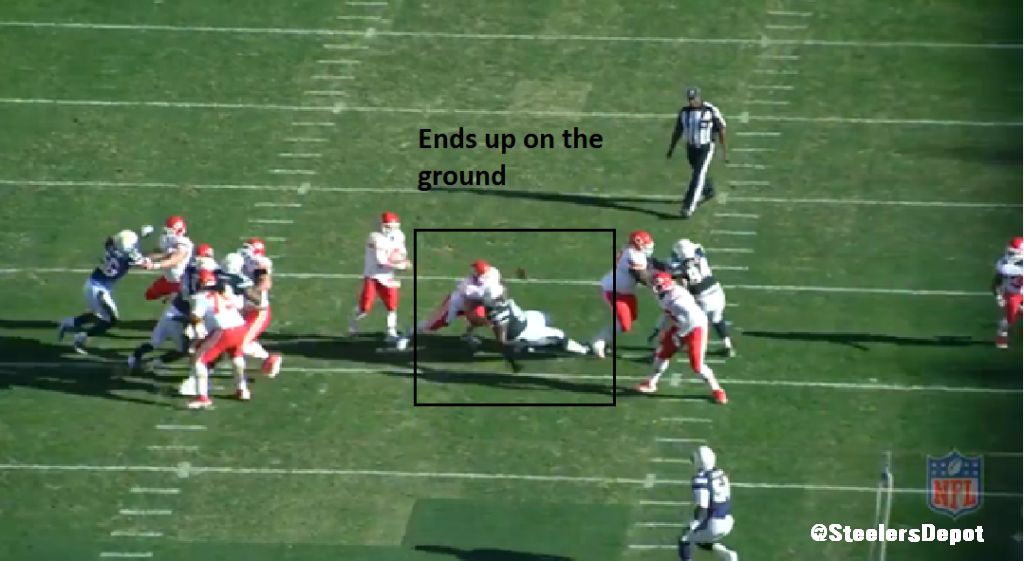 From those four games, his final numbers.

I’ve talked a lot about what happened but haven’t explained much of the why. Saw similar things in each game so lumping it all in now.

The first omission is I watched Thomas against a lot of zone blocking teams. It’s the bread and butter for Houston. Cincinnati and Kansas City run a good deal of it. Clearly, that isn’t the best fit for a plugger like Thomas. Not an athlete and quite possibly the slowest man on the field in every game I observed.

No one is expecting him to fly around. But the troubling issue is that poor first step. Thomas is very heavy-legged and slow off the ball. When he wins, it’s because of the naturally strong upper body he has. Strength he has in bunches.

But because he’s slow, lineman can get into his pads first and get in control. Especially on down blocks that you’ll often see in zone blocking schemes. And once his momentum gets going down the line, it’s tough for him to stop. Really has trouble when the backside guard is blocking him. When it’s the frontside blocker and he can use his hands, he’s more effective.

Doesn’t use his hands often enough in the run game to shed. Part of that is because of his responsibility, two-gapping involves holding the point of attack instead of shooting a gap, but it’s still an area he’s got to work on. For a guy who is entering his fifth year, not his first, you wonder how much better he’ll get. He has 34 inch arms and you’ll see a moment of active hands here and there but not consistently enough.

It doesn’t appear Thomas played much five tech until he was benched. Week 17 was tough to judge because of the Lissemore injury but based on that, he didn’t see much time as the five tech. Did take a quick look at Week 16 against Oakland with a healthy Lissemore and did see Thomas log snaps at end. He played there but probably doesn’t have as much experience as has been reported.

He’s a nose tackle. Not an end.

Thomas may use his hands a little bit better as a pass rusher than he does against the run. But he’ll usually resort to a bull rush. Can generate a push, but again, with heavy legs, lineman tend to have an easier time anchoring.

As mentioned earlier, a quick snap breakdown after his benching after the Bengals game.

In Week 14, Thomas and Lissemore each saw 19 snaps on defense.

So again, a drop off in playing time but certainly not a complete reduction.

Money is negligible. As we’ve pointed out, a $1.5 million cap charge in the first year and $2.5 million in the second. If the team really wanted to, he could be cut after this season and they’d save two million.

As other beat writers and Dave Bryan have speculated, Thomas is not a starter. He’ll be similar to Al Woods in that he can rotate about, picking up 10 snaps at defensive end each game and another couple at the nose. Perhaps versus power schemes, he rotates in more often over Steve McLendon. Versus zone teams? I wouldn’t want him to take a snap.

And if the Steelers wind up playing as much subpackage football as they did in 2013 (60% of snaps) Thomas’ role will shrink even more.

Bottom line. A plugger for depth purposes. A necessary move but not one that is going to make or break the team.