Another look at the sacks and penalties allowed by the Pittsburgh Steelers in their win over the Baltimore Ravens.

1. 2nd and 10, 11:28 2nd. Shotgun, empty. Slightly unusual look. Heath Miller the No. 1 receiver (closest to the numbers) on the strong side with Le’Veon Bell the No.2 to the weak. Four man rush vs five blocking. 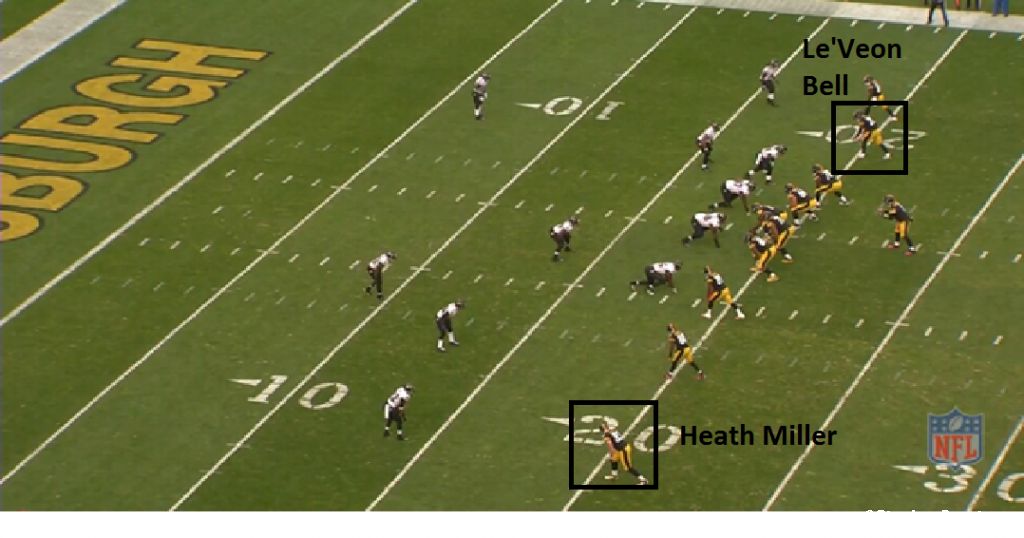 Ben Roethlisberger pumps to the flat and looks back for Antonio Brown on the dig. Safety driving on it, however, and Ben is forced to look to the other side of the field. Good job in going through his progressions at least. Nothing available for Ben with seven dropping into coverage. 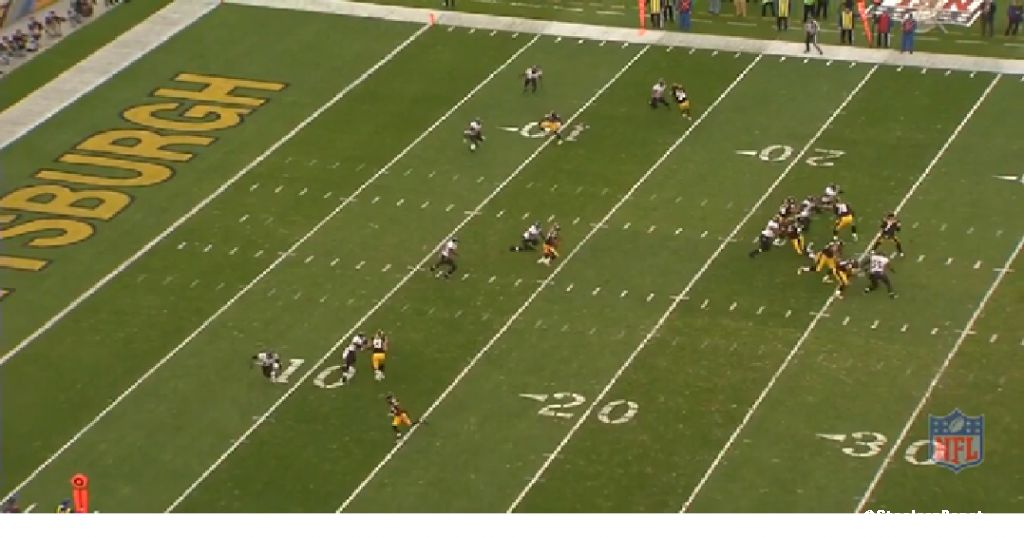 Fernando Velasco solo on Brandon Williams after Ramon Foster gives help to Kelvin Beachum vs Terrell Suggs. Center walked back to the pocket by the 335 pound rookie and Williams sheds when Ben climbs and starts to scramble to his left. 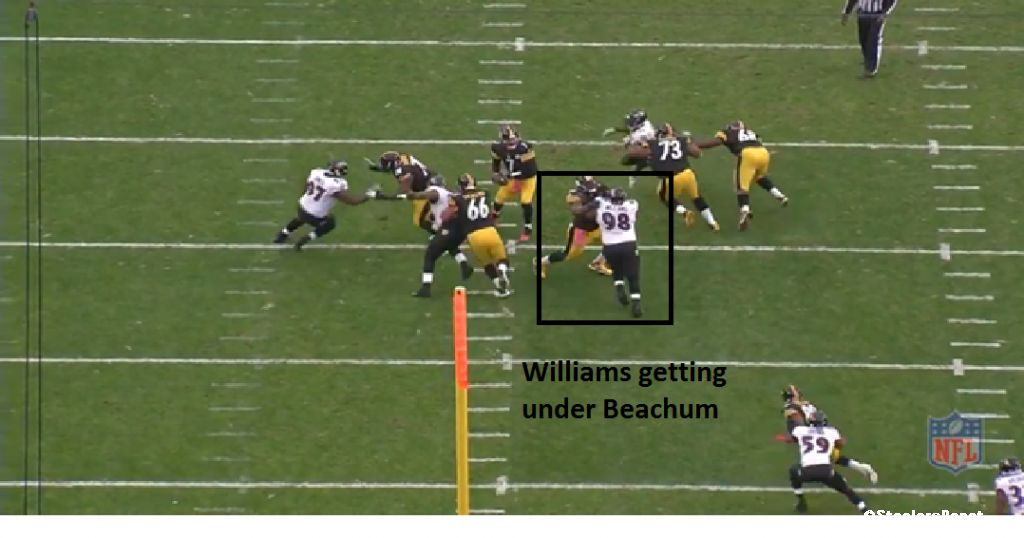 Blame: Half on Velasco for actually giving up the sack but half on good coverage from Baltimore.

2. 2nd and 3, 6:15 3rd. Shotgun, 11 personnel. Four man rush vs five blocking. Pretty simple on this one. Suggs beats Beachum. Suggs lined up as the seven tech (lined outside the TE). 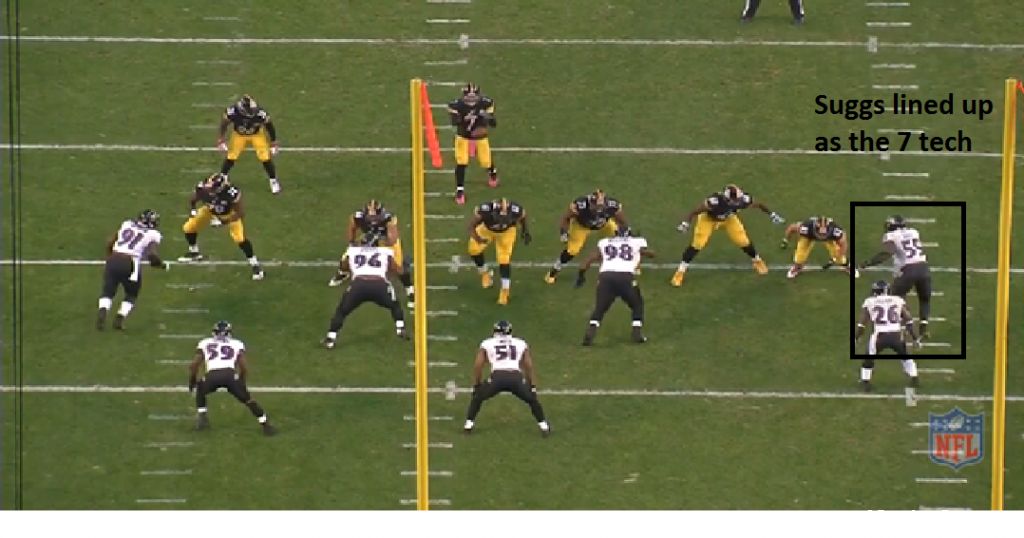 Beachum lunges on his punch, starts to double over, and doesn’t move laterally. Gets caught in trail position and unable to recover.

Ramon Foster gets a nudge on the back from Velasco to tell him to slide over to help Beachum (can slide when only four are rushing with five blocking and have extra lineman) but Foster is unable to get over and help in time. 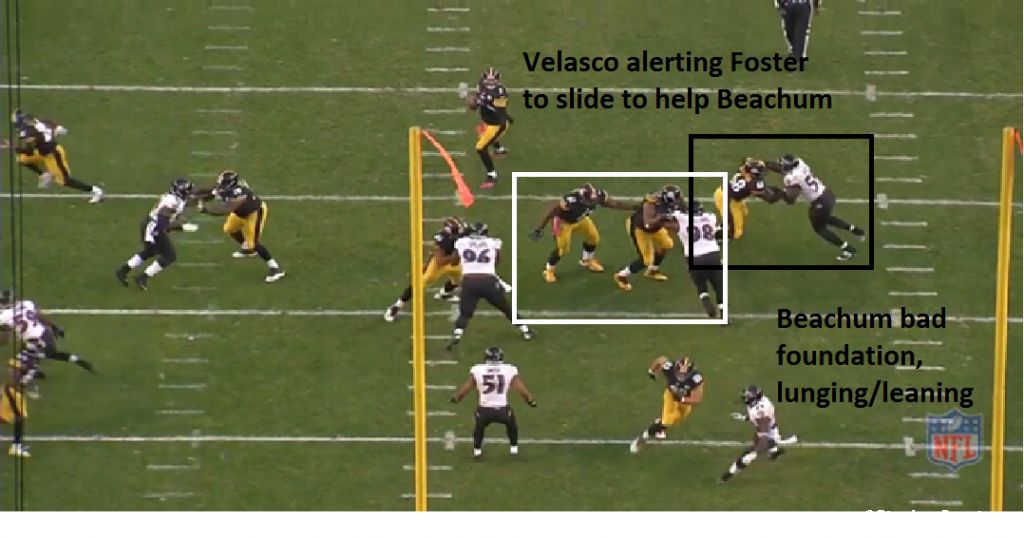 First, a look at the route. Post/corner by AB (No. 1 running a curl to hold the corner) that’s supposed to get the safety to bite (post vs two deep common) but the safety sits and Brown doesn’t get any separation. 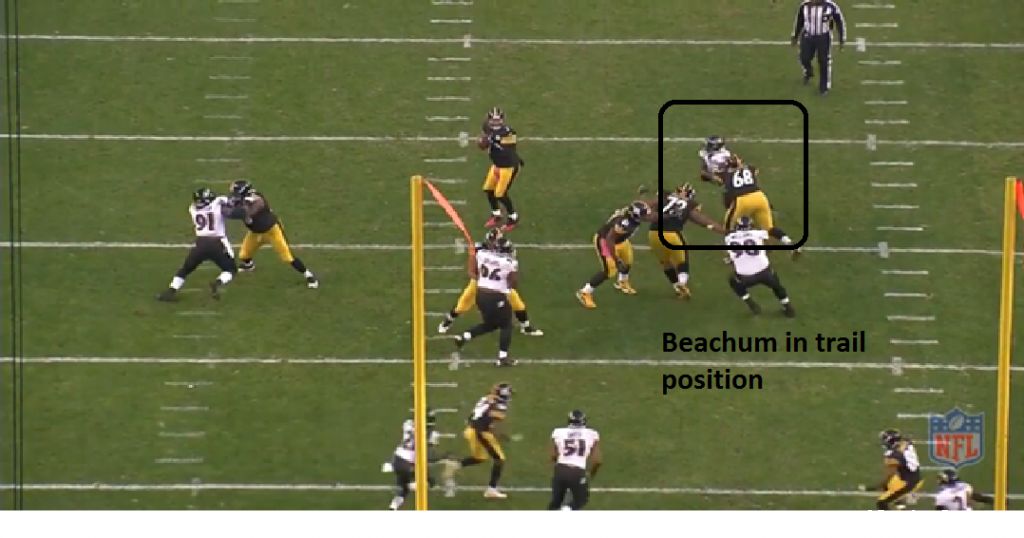 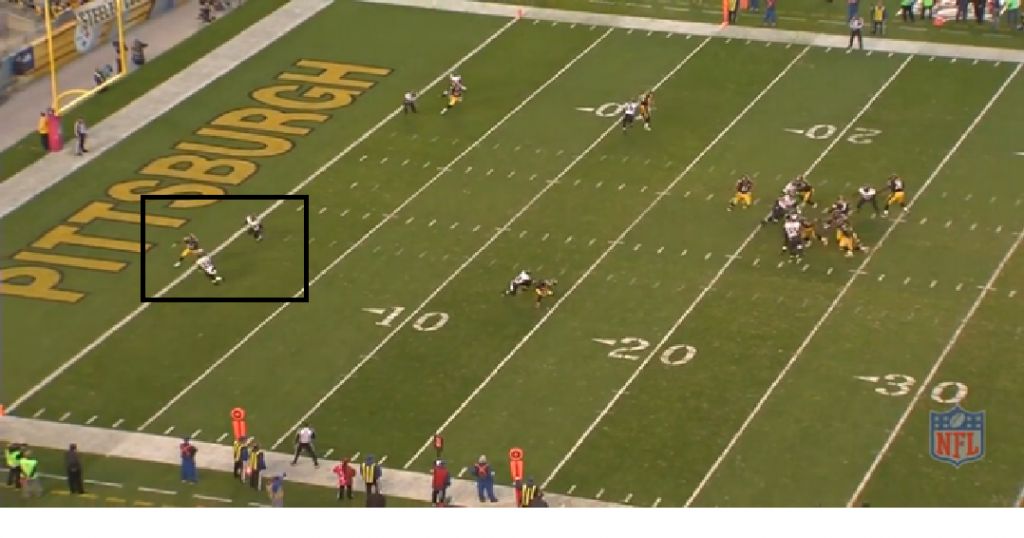 The defensive tackles (92, 95) stunt. Steelers do pick it up but David DeCastro unable to mirror against Haloti Ngata. Looks like his weight distribution is off; that he’s playing on his toes. 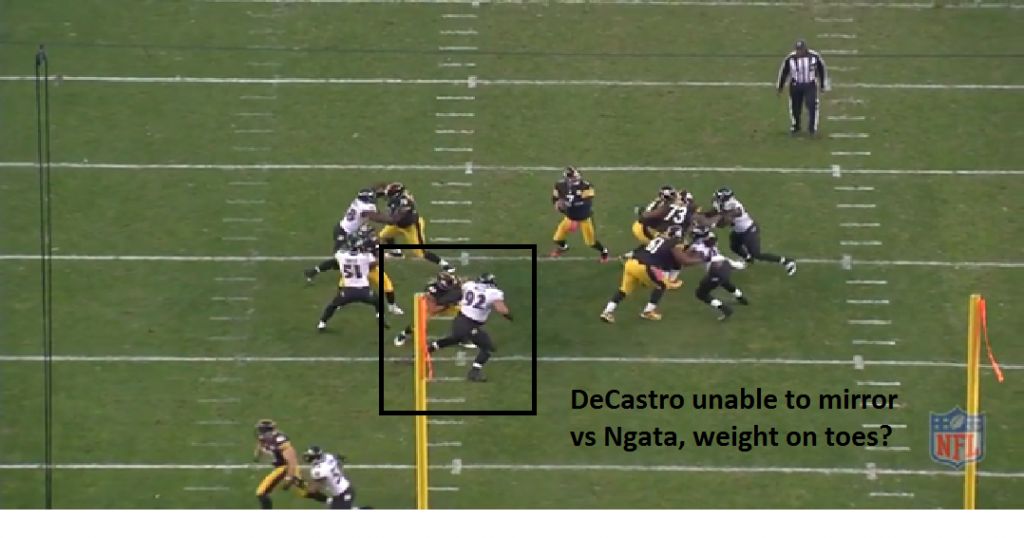 Elsewhere, Guy Whimper is bullrushed by Elvis Dumervil and gets walked back into the pocket. Dumervil is finally able to get under his pads, get Whimper almost completely upright, and shed him. 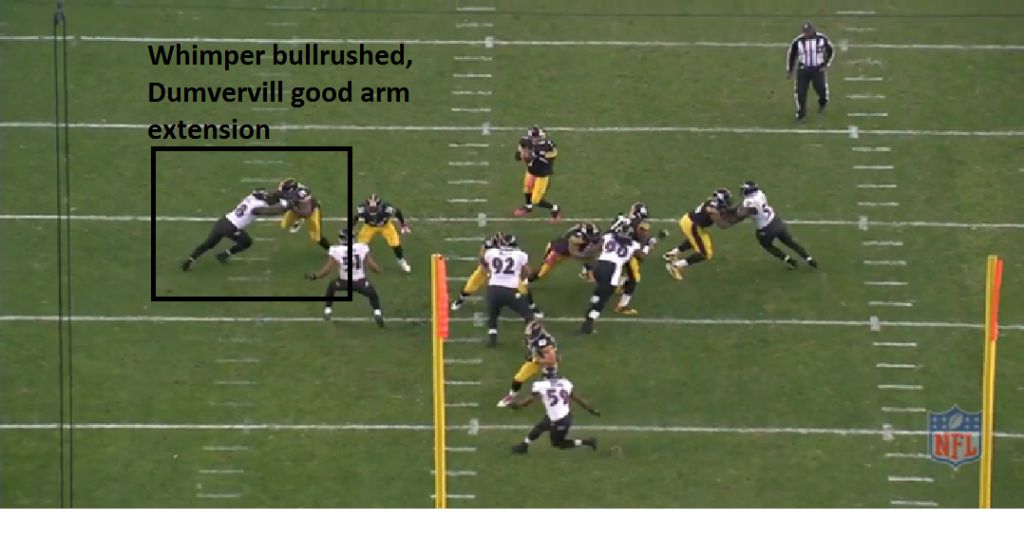 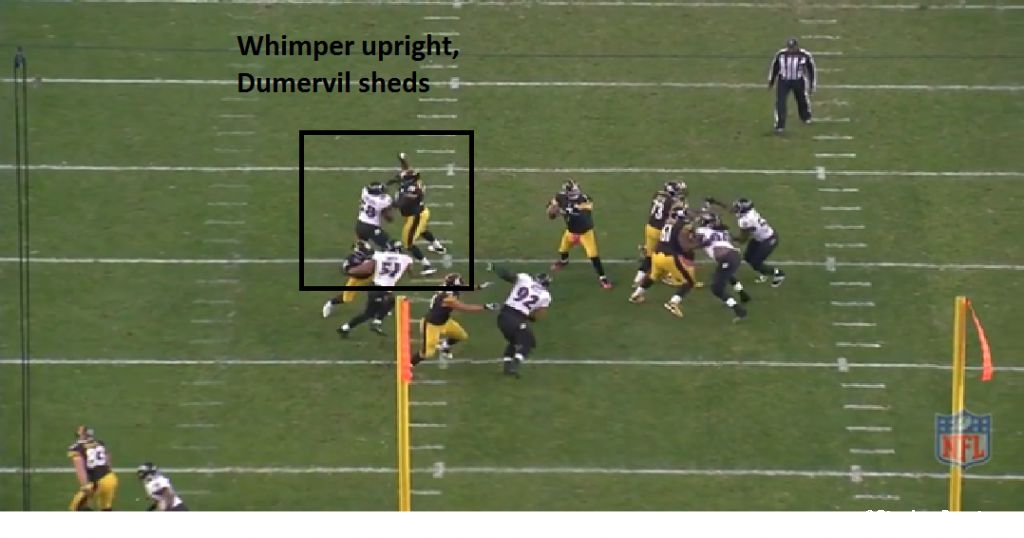 Blame: Half on Whimper, half on DeCastro.

Defensive Scheme/Coverage: 2.5 (had previous error with this, now corrected)

Only one this week, a good sign compared to the ugly five accrued against the Jets.