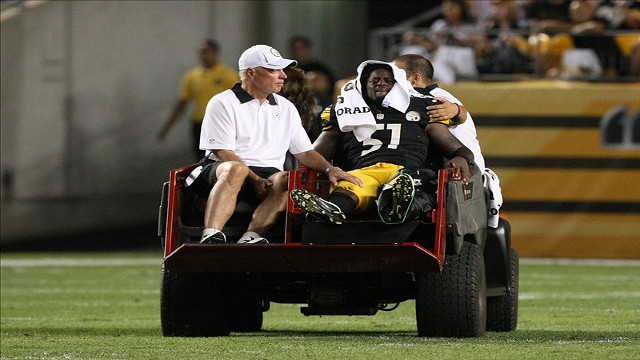 Starting next week, Pittsburgh Steelers second-year linebacker Sean Spence will be eligible to begin practicing with the team if deemed healthy enough to do so. According to Mark Kaboly of the Pittsburgh Tribune-Review in a Friday interview on the David Todd Show, Spence will indeed begin practicing next week and will be removed from the PUP list.

“He is going to practice Wednesday,” said Kaboly of Spence. “They have three weeks to be able to activate him.”

Interesting news from @MarkKaboly_Trib saying Sean Spence WILL come off the PUP and practice next Wednesday here on @970espn. #Steelers

Once Spence begins practicing, the Steelers will have a three week window in which he must be either activated to the 53 man roster or placed on injured reserve.

Spence tore up his knee as a rookie in the preseason finale against the Carolina Panthers in the process he damaged his peroneal nerve. That kind of injury is tough to come back from as it can lead to a condition known as drop foot.

During the 2013 NFL Draft, Keith Butler, the Steelers linebackers coach, didn’t seem too positive about the Miami product being able to play in 2013.

“It will be miraculous if he comes back next year,” Butler said. “We are going to take a chance on him and see if he can come back. To me, he is worth every bit of that.”

Spence, however, predicted back in May that he would indeed play this season.

“I know I’m going to beat the odds,” Spence said. “I’m not even worried about that. The progress that I have made, the doctors say that I’ve already beat the odds. I’m just keeping my faith in God and knowing he’s going to give me another chance.”

This is great news and I expect head coach Mike Tomlin will get into details this coming Tuesday during his weekly press conference.