Breakdown of the play of Pittsburgh Steelers rookie linebacker Vince Williams against the New York Jets.

2. 1st and 10, 12:14. Facing the Wildcat. All about gap control on these types of misdirection plays. Williams playing strongside “C” gap and the back cuts inside. But he helped forced the play inside to the flow.

3. 2nd and 9, 11:39. Nice job staying at home, not biting on the window dressing (end around, FB blocking away from run – picture to follow) 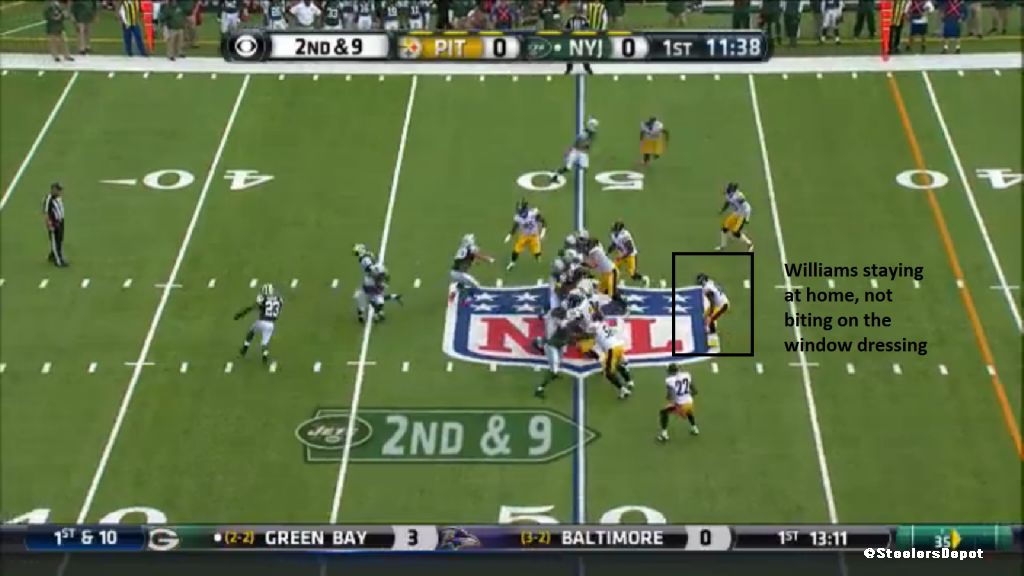 Colon chips the DE and works to the rookie, sealing him.

1. 1st and 10, 9:04 1st. Lead strong, Williams takes on the FB. Able to shed him and shows good hustle running the back down from behind after a ten yard pickup. Good individual play.

2. 1st and 10, 8:20. Bubble screen to Mike Goodson who was motioned out wide pre-snap. Nice job getting off the cut block from right tackle Austin Howard. But he gets stiff armed by the back and can’t make the tackle, who picks up the first down.

3. 1st and 10, 7:43. Probably played one gap too far over reading the pulling guard (hard to tell for sure, wasn’t able to use coaches film for this evaluation, only broadcast) but at least he’s reading his keys, albeit a simple one. RB cuts inside but Williams able to make the tackle, working over a lineman and grabbing Goodson’s legs to make the stop. Good play in a confined space.

5. 2nd and 8, 5:05. Williams shoots gap but misses Bilal Powell, running through a split second late. Evidence of a false step here. It could be him thinking passing and preparing to get depth but his right foot comes back off the snap instead of getting a good jump off the ball. That’s the difference between a tackle and being out of the play. Can get away with false steps at Florida State. Not in the NFL.

1. 1st and 10, 12:07 2nd. Playaction, ball thrown away from Williams to the left sideline. Does come across the entire field to get credit for the tackle though to be fair, the back ran out of bounds pretty much on his own accord.

2. 1st and 10, 11:27. Drops into coverage in underneath zone. Falls out of frame before Geno Smith throws the ball away.

3.2nd and 10, 11:20. Fake dive, run an end around. Williams initially drops then takes an excellent angle to the ballcarrier. Forces him to slow up and try to cut back inside but Williams makes the open field tackle. The angle shows off his smarts and the tackle exhibits good fundamentals, especially coming off a previous game where as a whole, the team struggled to tackle.

1. 1st and 10, 5:25 2nd. Power run. Turns his body vs Chris Ivory and becomes an easy target for guard Brian Winters to pick up. Needs to stay square so he can see the ballcarrier and shed. Bad technique. Picture below. 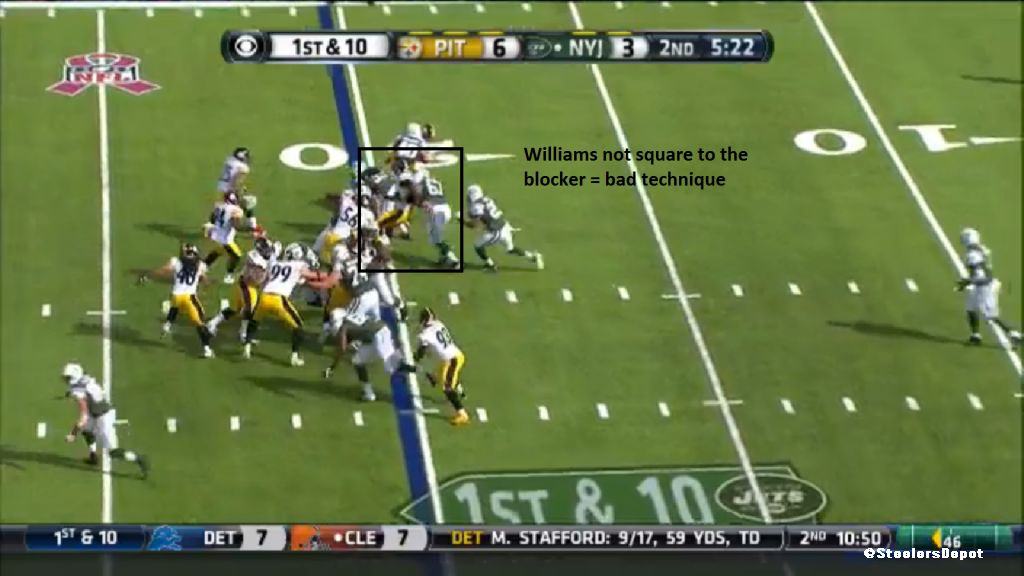 2. 2nd and 7, 4:48. Drops into coverage. Middle zone. Pattern read where you play man when someone is in your zone. On the fullback as he releases before vacating into the flats where Williams peels off and gains depth. Small aspect of the game but a good job by the rookie.

2. 2nd and 9, 11:50. Designed blitz. Stonewalled by Ivory on bullrush. Only upside was his awareness to get a hand up as Smith threw the ball his direction. Did not knock down the pass.

5. 1st and 10, 9:58. Sheds Nick Mangold, working to the second level. Jumps on Chris Ivory’s back to help make the tackle though not officially credited.

6. 2nd and 5, 9:21. Pulling guard Brian Winters tries to seal Williams but the guard gets overextended on his punch and falls. Williams still a non-factor on the play.

7. 1st and 10, 8:01. Drops into coverage, starting to carry the TE vertical. Keeps his eyes in the backfield and drives on the throw down the right sideline, taking a good angle to the ball and showing some fluidity in his hips. Ryan Clark picks the pass off.

1. 1st and 10, 5:36 3rd. Maybe his best play of the game. Sees the Jets OL getting downfield, recognizes screen, drives on the running back. Nick Mangold can’t block him in time and Williams smacks Powell almost immediately. 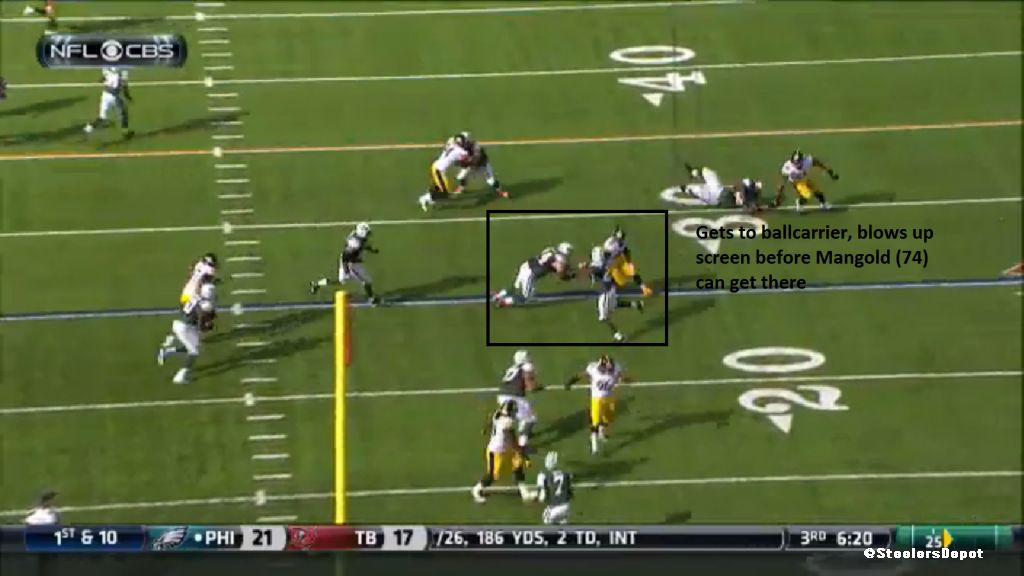 Williams looks light years ahead of where he was just a few weeks ago. It’s obvious he’s picking up the defense at a rapid pace allowing his to trust his instincts more and play considerably faster. He’s got an explosive first step (when there isn’t a false step) and closes quickly with the ability to pack a big hit. Love his hustle and energy too. Runs every play down.

Still some things to work on, he’s still getting anxious and out of position at moments, but he has the looks of a full-time inside linebacker. It’s been an impressive start and makes the loss of Larry Foote almost negligible.