Breaking down both sacks allowed by the Pittsburgh Steelers vs the Cincinnati Bengals Monday night. Both of these fairly simple but still worth pointing out as I break down each sack allowed throughout the regular season.

1. 2nd and 10, 12:02 1st. Shotgun, 11 (1 RB, 1 TE) personnel. Four man rush by Cincy with the Steelers blocking with six if you include RB Felix Jones on a block/release (he never chips or blocks anyone). LE Carlos Dunlap briefly shows an outside rush before planting and cutting inside. 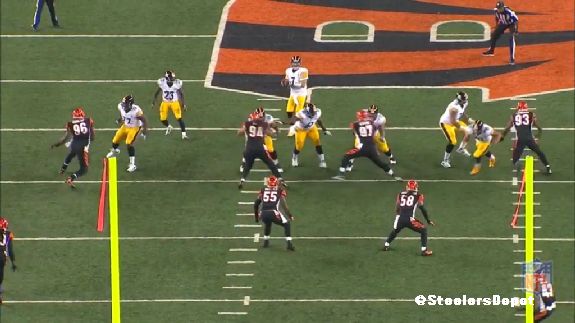 Marcus Gilbert doesn’t have the ability to move laterally and gets beat to the inside.

Domata Peko has his way with David DeCastro, getting under the second year guard and pushing him into Ben. 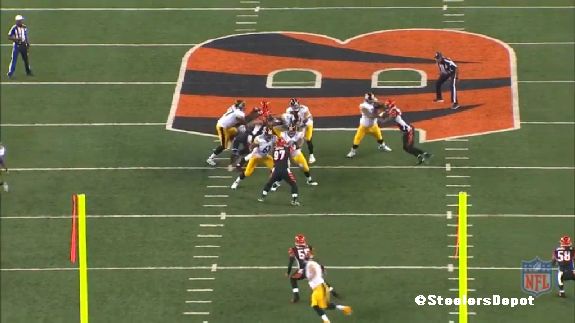 Ends up knocking DeCastro to the ground and he rolls into Mike Adams leg. Luckily avoided a serious injury.

Blame: Marcus Gilbert and David DeCastro responsible for .5 a sack.

2. 3rd and 20, 11:53 3rd. Shotgun, 11. Bengals fake a cornerback blitz and ultimately rush four, dropping seven into coverage with two deep over the top. Steelers only have a three man route downfield but block with just the OL. Good coverage downfield, predictably so on 3rd and long, and nothing available for Ben. 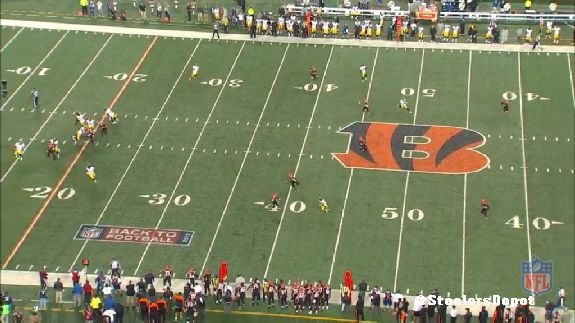 DeCastro walked into the pocket a little bit and Ben Roethlisberger flushes out to his right. Ben does what he is known for best, scrambling around, reversing field once and nearly again before Geno Atkins wraps him up.

This sack is on Ben. From snap to sack, the play lasts approximately 10.5 seconds. Obviously, no offensive line will be able to hold their blocks that long, especially with Ben running East/West.

I get trying to make a play, especially after the crushing, questionable tripping penalty on Marcus Gilbert. But there isn’t anything available downfield. By this point in the picture that follows, Ben needs to check it down to one of three options I’ve highlighted.

No, it’s unlikely any of those options pick up a first down. But better than taking a sack. Get the ball to around your own 40 and hope Zoltan Mesko can pin the Bengals deep.

*NOTE: The commentators were correct. I wrongly gave David DeCastro half the blame on the second sack allowed vs the Titans. It should have gone to Marcus Gilbert. That change is reflected in the seasonal sack counter.

Just one this week. Marcus Gilbert’s “trip”. Agree or not, it’s still the call that was made.